Breece Hall is one of the top backs in the 2022 Draft class – how could his game translate in the NFL? Jake Estes breaks down Hall’s game! 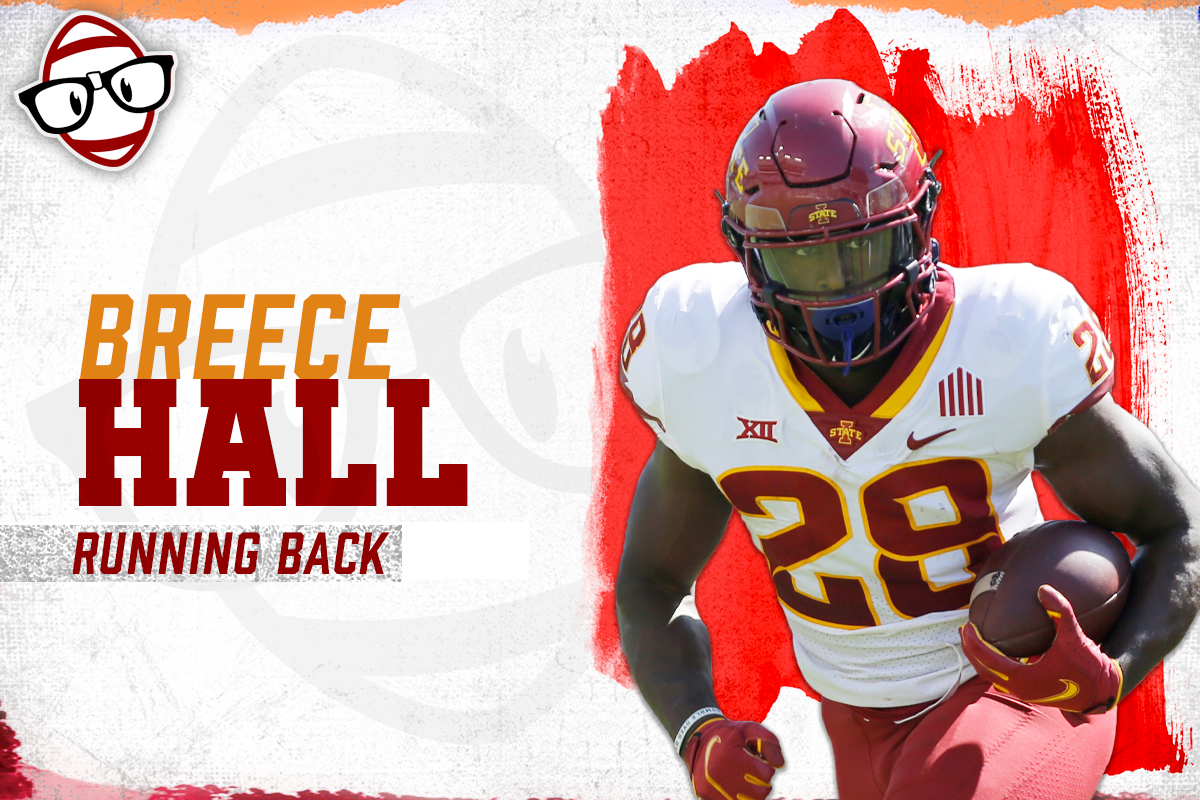 We’ve been fortunate to see some solid RB classes the past few years, but this year’s class is less exciting. In a thin RB class, Breece Hall brings a sense of relief to the fantasy football community. Hall is fast, has good size, catches well, and holds his own in pass protection, making him one of the few 3-down backs in this class.

Hall dominated his opponents during his three-year stint at Iowa State University, rushing for just under 4,000 yards and amassing 4,675 total yards from scrimmage. Hall immediately took over the starting position as a true freshman, only one year after, well-known NFL RB David Montgomery departed. With Montgomery gone, Hall then managed to hold off NFL RB Kene Nwangwu in 2019 and 2020. Iowa State has proven they can produce NFL RBs, and Hall is undoubtedly the next man up.

There’s much to like about Hall. He’s shown great vision and patience as he waits for holes to open up and defensive players to commit to gaps, which is vital in the NFL to succeed. Hall lets defenses over-commit to runs inside with frequency, and with great speed, he kicks it outside and breaks a long run. Additionally, his yards per carry (YPC) have improved year-over-year, something we love to see out of a young, malleable 20-year-old RB.

Now to the good part, the numbers. As an analytics guy, I lean heavily on data to help make informed, conscious, logical decisions. From recent years, it’s become clear we can “predict” which players are more likely to become good fantasy football players by analyzing historical data. We ask ourselves what traits or characteristics have a relationship to fantasy points? Through a form of statistical analysis, called regression analysis, we can answer that exact question. For RBs, the metrics we want to focus on are: Draft Capital, Burst Score, Dominator Rating, YPC, Target Share, and Weight.

Unfortunately, not all of that information is available yet, which means we will have a better idea after the NFL combine and the 2022 NFL Draft. However, we can still take a look at Target Share, Dominator Rating, YPC, and Weight:

SO far, Hall has checked all of the analytics boxes. Keep an eye on his draft capital and burst score–we want a high burst score and an early draft pick.

Plays like this were a staple in Hall’s game at Iowa State. Hall runs across from the backfield and makes the catch. After the catch, Hall shows some of his burst and agility with a quick cut to add a few extra yards:

On this run, Hall quickly finds the hole and bursts through, displaying good vision and great speed:

The patience and vision Hall shows on this run are impeccable. He starts up the middle, doesn’t see anything, then bounces outside the tackles for a long run:

Another run bounced outside:

As impressive as Hall has been, he’s not perfect. Although Hall has great speed, it seems his top speed isn’t maintainable. Hall broke a lot of long runs, but he loses some steam on the tail-end as defenders often catch up and make the tackle. Another concern is his desire to break runs outside. While I listed his vision and patience as a strength, I wonder how often he will be able to kick it outside on NFL defenders who are much faster and stronger.

In a rather lackluster RB class, Hall is a diamond in the rough–there isn’t anything he can’t do. It’s highly likely he goes to an RB needy team and should pay immediate dividends in fantasy. In non-Super-Flex leagues, I expect Hall to be in the running for the number one overall pick in 2022 rookie drafts. Hall is the RB you want.