Brock Purdy has some serious moxie and how can you not love someone rocking a mullet in 2022. 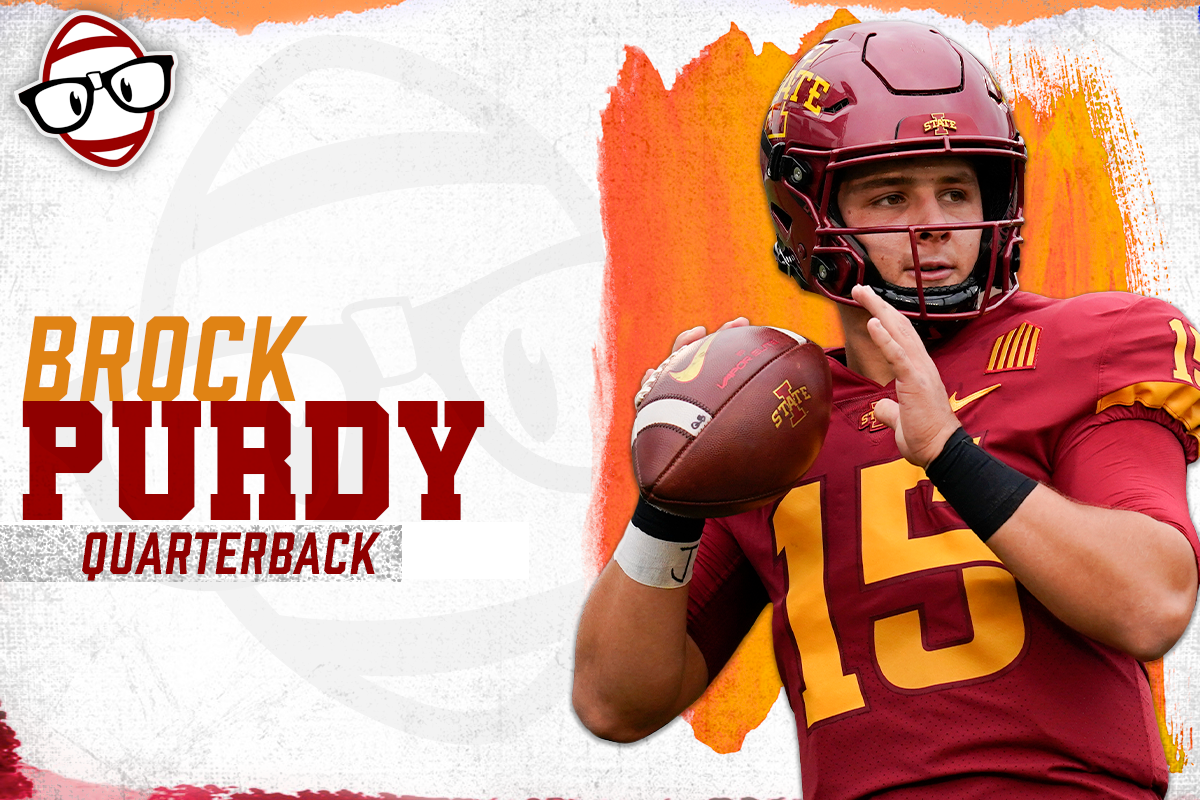 Brock Purdy is not a name that comes to mind when mock drafts come out. He may wind up not being selected in the 2022 NFL Draft at all. Purdy as a quarterback has a comparable playing style to Baker Mayfield. That’s not to say that he is on the same level. Purdy has some toughness to his game, which will not get him a starting job and maybe not a backup job either. He does some things as a quarterback to get him in a camp.

Purdy attended Perry High School in Gilbert, Arizona. He earned a 3-star recruit ranking from 247Sports, Rivals, and ESPN. He chose to go to Iowa State over some more prominent schools that recruited him. Iowa State would have presented him with more of a chance to play without a challenger at the position, though. There hasn’t been a quarterback selected in the NFL Draft from Iowa State since Seneca Wallace in 2003.

The stats tell the tale of an average to a below-average quarterback. There wasn’t a lot of help on offense at Iowa State. Purdy, however, didn’t elevate the talent around him. The starts each season show a durability aspect. And he did complete a relatively high percentage of his passes.

The yards per attempt being under eight yards for his junior and senior seasons is not good. An NFL quarterback must be willing to push the football down the field. Purdy seems to be more inclined to dink and dunk his way in the passing game. While that will keep interception numbers down, the offense isn’t threatening the defense vertically and won’t have many chances to score touchdowns. Statistically, his best season was his sophomore year. That will be a knock against him, as a quarterback should get better with more experience.

Purdy will occasionally, during a game, pull the ball down and run. Though, he’s not a threat to consistently beat a defense with his legs. When everything breaks down inside the pocket and can run for a few yards, a quarterback can help keep the offense out of third and long.

Purdy throws the football where his guy can make a play on it. That’s not something a lot of young quarterbacks do very often. He also has a nice touch on his passes. He has the potential to serve as a suitable backup quarterback as he seems to process information quickly.

Purdy here puts the ball where the tight end can make a play over the middle of the field.

This is an NFL throw on this play to the receiver, and the defender doesn’t have a chance to make a play on the football here. Either the receiver makes the catch, or the pass falls harmlessly incomplete out of bounds.

Purdy doesn’t have the natural agility to force the defense to put a spy on him. However, he makes a nice move on the defender to pick up the first down and a little extra on the play.

When watching the Iowa State product, he doesn’t have an NFL arm. There’s not a lot of velocity on his passes. An NFL team will not be able to pin their hopes on Purdy. NFL defensive backs would sit on the short routes, this daring him to throw deep.

Pass coverage will be a lot tougher in the NFL. And a starting quarterback has to beat that coverage or throw over the top deep. That’s not something that Purdy can do.

Purdy doesn’t set up when he throws. When he drops back to pass, he’s not regularly following a throwing motion. Honestly, it looks as if he’s towing while standing on ice at times. Improving his mechanics may give him some more velocity.

Passing mechanics can be improved with coaching and a player who is receptive to coaching. There is nothing to indicate that Brock wouldn’t immediately take to coaching. But he’s not going to get much personal attention in camp. An NFL quarterback coach works with the starter, backup, third-string, and anyone vying for a camp spot at the position.

Purdy broke just about every record at Iowa State. If Chase Daniel (similar profile) can find a home as a career backup, with a little bit of tooling, so can Purdy.