Carson Strong is a polarizing QB prospect, Andrew Harbaugh tells us why he should not be! 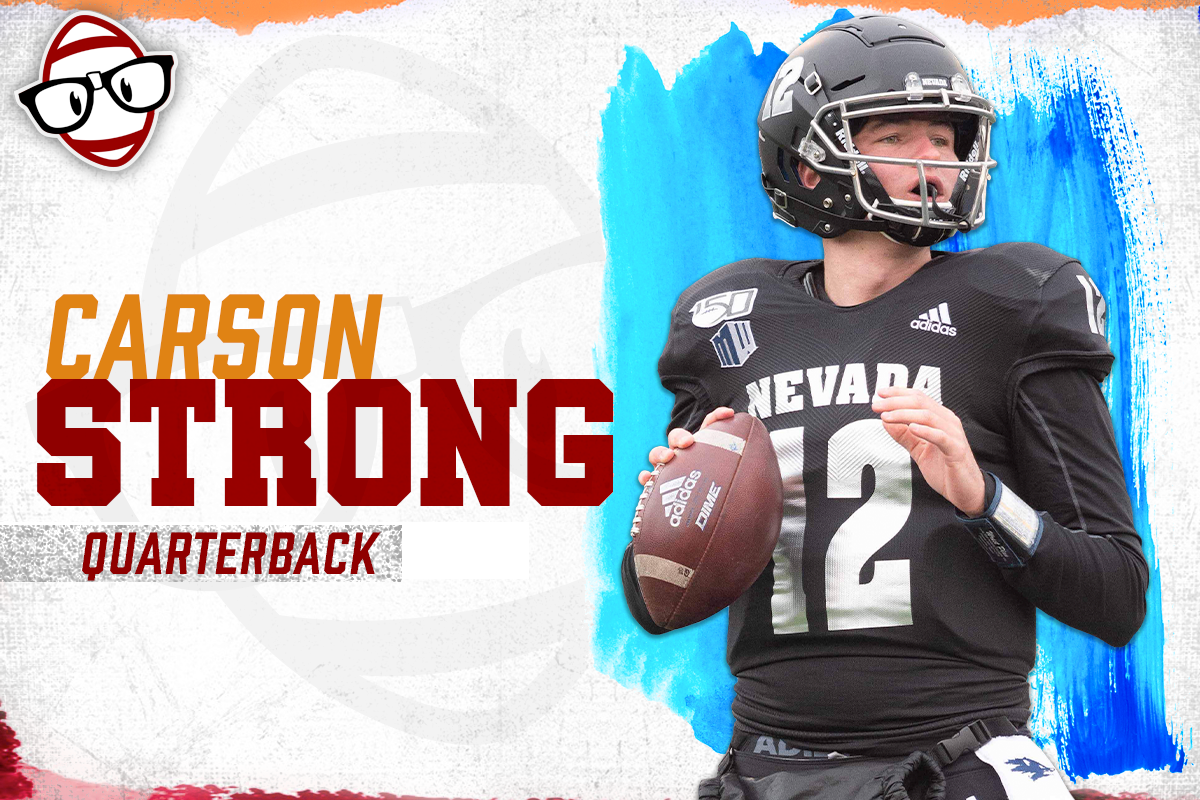 Carson Strong has been on the mind of college football and NFL fans alike for two years now. In the draft, we finally get to dive deep into his outlook as a prospect with him. He has an NFL arm, but can he be an NFL quarterback? We see tons of NFL arms every year in the draft, but sadly there is more to it than the arm. Those traits need analyzing and why this profile will come in handy when the draft rolls around.

TALE OF THE TAPE

Strong played his high school football at John C. Wood High School in Vacaville, California, in the San Francisco area. He played well enough to earn a 3-star recruiting rating from 24/7 Sports. Despite his play in high school, only one school made him an offer, and that was Nevada, where he ultimately ended up. He never took any other visits, entertained any other school offer of being a walk-on, but instead, Strong went to the one school that wanted him and found success.

Strong saw no action outside of a fill-in role in a blowout against Portland State in his freshman year. His sophomore year, though, is where he took the reins. In 2019, Strong would pass for 2,335 yards with 11 touchdowns and seven interceptions, not any stat line that lights the world on fire, but his passer rating and completion percentage showed he had a good head on his shoulders.

That mental processing would reach maturity in 2020 during the most challenging year for everyone in college football. He would form into his own player and help the Nevada offense become the explosive offense we now know. He would see his stats take a massive jump last year, and in this past year, he would keep his completion percentage above 70 for both years while also passing for over 7,000 yards and 63 touchdowns in the 2020 and 2021 seasons combined.

Strong and the Wolfpack wouldn’t find much team success in both seasons, but they had a few notable wins. In 2020 he would win the Idaho Potato Bowl against Tulane. He passed for 271 yards and an impressive five touchdowns, which gave the team momentum to ride into week one in 2021. The opener in 2021 would pit the Wolfpack and Carson Strong against California, and Nevada would pull the upset in Berkley, but sadly the rest of the season wouldn’t be as successful. They would reach a bowl game as a team, but Carson Strong would opt out to prep for the Senior Bowl and the NFL Draft.

Raw, unadulterated arm strength has Carson Strong in the QB1 discussion. Whether it is in a clean pocket, a collapsing one, on the run, or off his back foot, as we see below, Strong demonstrates all the ability to have an NFL arm.

At times does the wild arm strength sometimes get away from him? Sure. Every NFL passer does but Strong shows that his arm strength is his moneymaking trait. An added benefit of it is that no matter where he gets drafted, the weather and the seasons won’t make a difference. When Josh Allen was drafted to Buffalo, his arm strength made the weather a non-issue; the same can be said with Strong.

In Bruce Arians’ book, he explained what an NFL window was to Peyton Manning because he was holding the ball too long and getting sacked. That won’t be the case with Strong. Now I am not saying he is a better processor than Manning, but instead, he doesn’t need to develop that trust with himself and his receivers.

Nevada isn’t known for its star recruiting or stellar athletes, so Strong has been making tight-window throws for the last three years. He will already have the trust in himself and his receivers from day one to make those tight-window throws. Will his turnovers be high? Probably, but he is also going to have a lot more big plays than your average rookie.

One of Carson Strong’s limitations is his mobility, but that also has to do with a rumored leg issue. During the college football season, I heard that NFL teams are genuinely concerned with it and the limitations it presents for him. After the college season, Strong did visit an NFL team doctor, and since then, I haven’t heard anything good or bad from sources.

One last area to improve upon potentially for the Nevada signal-caller is his progressions. He can sometimes focus on his first read and not look after it, but as last season progressed, he did seem to get better at it. An NFL staff will address this early on in rookie camp, and getting NFL reps in the preseason will go a long way to set him up for any regular-season success here. Again, patience will be needed with Strong because I expect the turnovers to be high early.

Like any player or worker, landing spot and job location mean everything. It is no different for Strong. His style of play is NFL-friendly, especially fantasy-wise, and he has shown he can do it with less than ideal athletes and surrounding weapons. The right team like a Washington or even New York Giants could have him come in on day one and make an impact. Whereas a landing spot like Pittsburgh or Denver may see him be held back a little just based on those teams handling of rookies and the responsibilities they place on them.

He reminds me of Gardner Minshew coming out of Washington State, and I am a fan of him. I think a similar play and stat result can be expected. When he is on top of his game, you will be over the moon, but when he is forcing those tight-window throws and getting turnovers, you will wish he was still in the Mountain West.