Charlie Kolar was once again a receiving force in the Big-12. His lack of NFL athleticism could be concerning as we approach the draft. What does the film say? 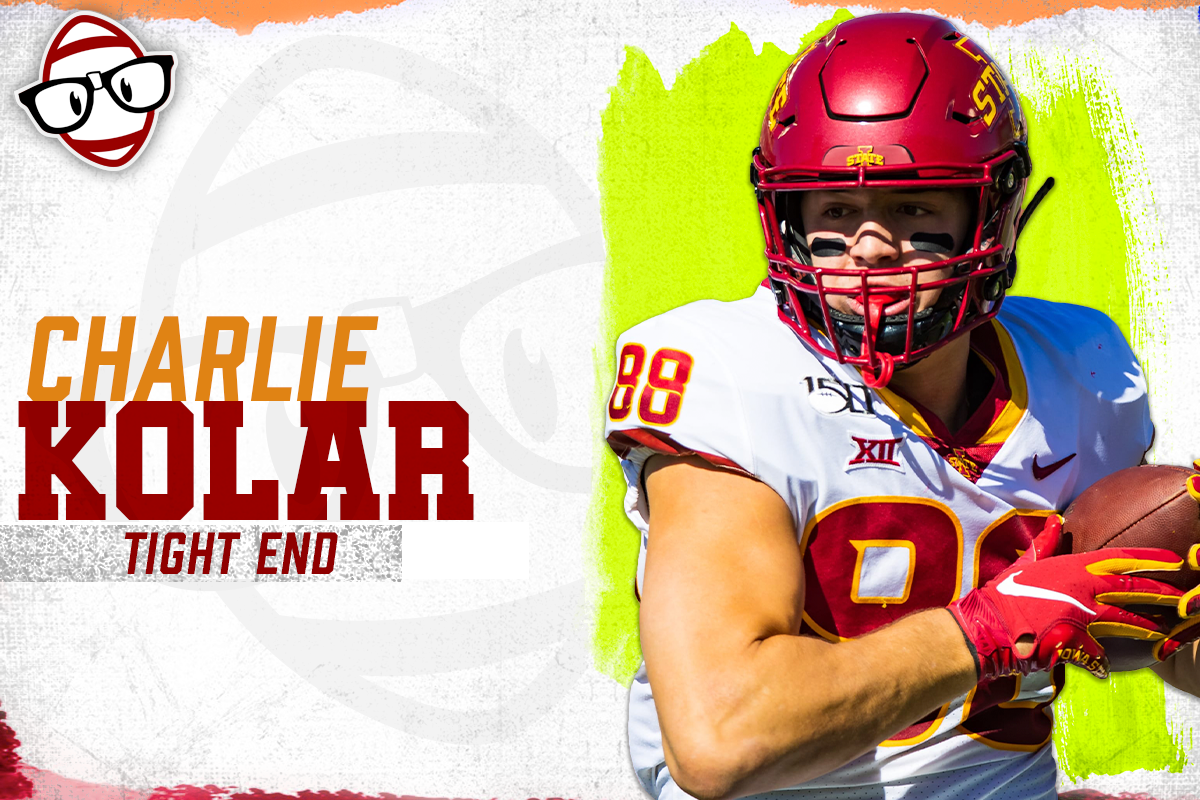 Charlie Kolar has a distinguished collegiate production profile. A Mackey Award finalist in consecutive seasons, Kolar’s 62 receptions in 2021 were the 10th most in Iowa State history for any position, and he led the Big-12 in all significant TE receiving categories. A consistent week-in week-out performer, Kolar had at least four receptions in all but one game in 2021 and will end his ISU career on a 36-game catch streak.

Kolar has accomplished a great deal on the field at Iowa State. However, he may be more accomplished academically, earning First Team Academic All-Big12 honors four consecutive seasons at Iowa State. Kolar carried a 3.99 GPA and was deservedly honored with the William V. Campbell Trophy (the “Academic Heisman”) en route to a mechanical engineering degree and a post-graduate degree in finance. It is never a certainty that book-IQ will translate into football-IQ, but his standout academics will merit some amount of consideration from NFL evaluators.

Kolar’s measurables would indicate that he will spend the majority of his time as an in-line TE. While he does offer some of the traits that would match that assumption, many of Kolar’s best routes and plays came when detached from the offensive line. He is a fluid route runner who understands the importance of leverage and stem adaptation within offensive concepts and defensive coverages. While Charlie never demonstrates elite athleticism on film, his big frame, and this spatial awareness made him a preferred target on all three levels of the defense.

Despite excelling as a detached receiver, the Cyclones did use Charlie in-line a significant percentage of snaps. Kolar has no trouble getting open from an in-line alignment. However, his blocking proficiency at the point of attack will need to improve significantly to become a starter at the next level. While blocking doesn’t score us fantasy points, it directly affects snaps, and I was disappointed that Charlie couldn’t show more in this area.

Kolar is a willing blocker and performed well in screen and downfield blocking opportunities. However, getting stronger and playing lower will be needed to stalemate NFL edge defenders. Amongst the taller TEs in this year’s class, Kolar is often out-leveraged by defenders at the line of scrimmage. Additionally, he routinely struggled to reach his assigned defender when asked to block backside on split-zone concepts.

Few Tight Ends come into the NFL ready to contribute as blockers, and Charlie’s willingness to improve in that area may ultimately determine his NFL value. However, Kolar offers a combination of size and route-running fluidity to make him an intriguing developmental prospect. Let’s dive into the film of this Cyclone Tight End.

As previously mentioned, Charlie Kolar is not a tremendously gifted athlete. However, he generates adequate separation against man and zone coverages by understanding leverage and route deception. Charlie consistently demonstrates the proper way to alter the stem of his route to attack the defender assigned to him. Once in position, Kolar can win at the top of patterns with either physicality or foot speed.

Let’s start with the physical variety route. This “Pivot-Out” route is becoming very popular in modern NFL offenses, and Charlie executes to perfection. Notice how he bends the route stem inside to attack directly at the DB. Failing to close down this space allows a defender to undercut a timing throw. A simple basketball drop step to maintain leverage at the top cuts off the defender’s ability to close while the ball is in the air, and Charlie churns out a few extra yards after the catch.

Another example here of understanding leverage. The defender plays with obvious outside leverage, and Charlie does a great job initially attacking that position. Kolar forces the defender to open his hips by faking to the corner before flashing back inside to the post. A slightly off-target throw forces a body catch here, which I rarely see on Charlie’s film.

Steadiness and consistency are harder to highlight with film clips, but these are the ball skills that Kolar possesses. He rarely drops on-target throws and attacks the ball while in the air. However, ball tracking and adjusting to off-target throws were problematic on film. Kolar may have a more limited downfield catch radius than his long frame may indicate due to a lack of agility and jumping.

Here is an example of what might constitute a spectacular catch for Kolar. Good toe tap on the sideline with two feet. There is nothing of note on the route, just a simple vertical in the soft spot of zone defense. Charlie does an excellent job of not over jumping on the sideline here, although there is still a question about how much vertical he is leaving in the tank.

Is Athleticism a Problem?

While watching Charlie Kolar, his perceived lack of athleticism doesn’t appear to be a limiting factor when translated into success. That lack of athleticism does appear on film, though. Unfortunately, Kolar elected not to test at the Combine, so our best chance to answer some of these athleticism questions will be March 23rd at the Iowa State Pro-Day. Kolar proving to be an “average” athlete would go a long way to solidifying Day-2 draft aspirations.

Here is a chance to see Charlie walk the tight rope and attempt to run away from a defender. His long strides chew up a lot of ground as he gains momentum, but the lack of initial burst may make that long speed irrelevant at the next level.

Rookie Draft Range: Late Round Selection – 4th through 7th Round

Late-round tight ends are a notoriously lousy bet. Tight End by nature is a slow-developing position, and frequently in dynasty leagues, especially in shallower roster formats, drafting and waiting on a developmental TE isn’t a realistic option. Charlie Kolar will need some development at the NFL level, and with Day-3 draft capital likely, there will be little expectation that he can produce in the 2022 season. For those in these shallow roster or win-now scenarios, you should be focusing your late-round strategy on another position.

However, for those in deeper roster leagues, leagues with taxi squad, or even shallow roster TE premium, I believe Charlie Kolar is a player that can find himself in a starting role within the first 2-3 years of his career. If you choose to draft and stash Kolar, your expectation should be that the production is at least a full year away. If Kolar does not match your immediate dynasty trajectory, file his name away as a potential free agent or trade candidate as he inevitably loses value during the 2022 season.