A year has passed, and little has changed for Chris Olave. He is still as smooth an operator as you’ll find and yet has never dominated the way we’d hoped. What do his NFL and Dynasty future hold? 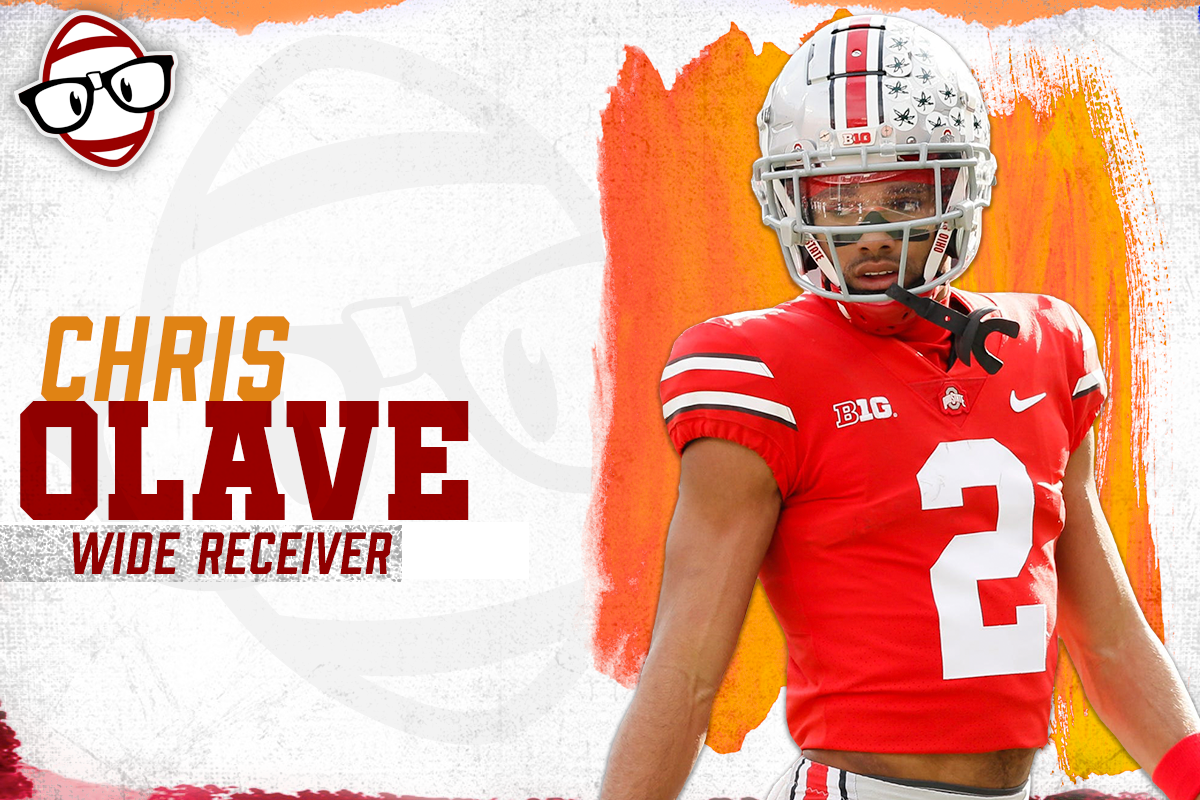 Chris Olave’s production in college and his status as a fourth-year draft declaration will be amongst the few flaws in an otherwise sterling overall evaluation. Olave was expected to declare a season ago and, despite returning for his Senior year in Columbus, he has done little to raise or hurt his NFL draft stock. Generally accepted as a late-first/early-second round talent a year ago, that seems to be the consensus again in 2022. The career statistics bear out much of what the tape will show momentarily; Chris Olave is a natural game breaker in the deep third of the field with a propensity for finding the endzone.

Olave averaged over 16 yards-per-reception over his first two years on campus and has scored a touchdown every fifth reception over his Buckeye career. He led the Buckeyes in team receiving yards twice and receptions once during his four years. Additionally, he was an integral part of Ohio State’s 2020 run to the CFB National Championship game, registering 132 yards and two touchdowns in a semi-final win over Clemson.

Both positive and suspect analytical scores are present. Olave posted solid numbers as an underclassman, giving him a 19.2-year-old breakout age (85th percentile) per PlayerProfiler. However, College Dominator (58th) and Target Share (77th) scores are slightly above average, and Olave was outproduced in his final collegiate season by two younger OSU WRs. These modest scores and the late-career dip in team market share lead us to the eventual discussion point. How should Chris Olave’s inability to truly separate himself as the “alpha” during four years at Ohio State affect his dynasty stock and eventual draft-day price?

Effortless, smooth, efficient, pick your adjective; you need not watch vast amounts of Chris Olave tape to observe what makes the Buckeye product so compelling. Olave’s ability to accelerate, decelerate and change direction while remaining under balance permeates throughout his film. Whether making toe-tap grabs or breaking angles after the catch, the natural lightness of his feet creates a terrifying playmaker along the sideline.

Generally looking to accept the football rather than attack it, Olave has soft hands and rarely drops passes. He favors catching the ball in a cradle fashion, with his hands underneath the football. While he rarely uses his body to catch the ball, I did find instances where attacking the ball from above was more appropriate. Because of this tendency and a limited physical skillset, Olave struggled when asked to play through contact or high point the ball on vertical routes. Even if it isn’t a primary component of his game, finding more success in contested-catch situations will be necessary to elevate Olave above WR2/3 status at the next level.

Chris Olave isn’t without faults, no prospect is, but his well-harnessed athleticism and vertical playmaking skills are coveted across the NFL. Let’s get into the tape review.

Let’s start with the most prominent and irresistible part of Chris Olave’s skill set, his ability to control his body at the limits and make it look effortless. Olave’s leisurely burst and fluid speed are rare in a sport where violent athleticism and twitch seem more commonplace.

Watch Olave calmly decelerate to allow TE Jeremy Ruckert to block the free defender and then accelerate and glide up the sideline without widening his base. This play essentially iced an early season scare vs. Minnesota and is one of many examples of his smooth maneuvering.

The feet look the lightest when Olave attempts to bend the edge. Amazingly, he’s able to break this angle, leaving the Rutgers defender grasping at air. The “12th defender” is rarely going to tackle this talented Buckeye. One slight stumble step, but even more impressive than beating the angle; he calmly rights his balance in plenty of time to split the two remaining tacklers.

Being balanced and fast out of breaks rarely wins separation at the next level. NFL cornerbacks have elite recovery skills, and many can quickly regain ground on receivers from a balanced position. Creating separation truly starts by creating unbalanced defenders at the top of routes. Coincidently, this is also why elite athleticism isn’t always the best indicator for WR ability. Route deception doesn’t require elite athleticism; it requires manipulating a defender’s eyes and feet within the stem of a route. Chris Olave has an understanding of this nuance, and it shows.

There isn’t a more obvious sign a defender is off-balance than flailing arms. Olave channels his inner-Deion on this outside release before slamming back to the inside and turning talented youngster Dontae Manning inside out. They call that “rolling down the windows” in the snowboarding world. Unfortunately, this route was the backside of QB CJ Stroud’s initial read, and despite the massive space, Olave does well on the scramble to run the defender out of the picture. Because of this decisive route running, Stroud picks up 15 yards rushing despite missing Olave on both the initial and secondary break.

Consecutive plays here give more examples of the ways Olave creates separation. The first route is a simple speed out at 12 yards. Notice how Olave attacks directly at the CB until he turns his hips to run downfield. Perfectly timed and capped off with a patented sideline toe-tap.

The second route is an outside-release-go pattern against press coverage. Easy initial burst wins the rep within the first 5-yards. As previously mentioned, Olave prefers to run underneath the ball late instead of beating the defender to the spot and out-competing them at the catch point. While he failed in this catch attempt, you can see him throttle down, so he doesn’t overrun the football while maintaining a stacked position. Adept ball tracking and not tipping off to defenders when the ball will arrive will be vital for a player who is uncomfortable high-pointing passes.

Certainly, fluid speed and acceleration are essential for getting beyond defenders downfield. However, Chris Olave’s ability to adjust to downfield throws and resist the urge to reach for passes early can allow his playstyle to work beyond Columbus. His ability to let the ball travel to and even just past him before reaching up to snare it is a rare trait, though not unseen. Emmanuel Sanders has made a living as a deep threat who rarely competes for the football at its highest point. Mastering these techniques has allowed for that, and Olave appears to be on a similar path.

This play is the whole package rolled into one. The hesitation step to gain immediate separation. The ball tracking and balance to get in position to catch a conservative, borderline inaccurate throw. The soft hands and spatial awareness to get the feet down in bounds. It doesn’t get much better than that.

The first example we have where separation wasn’t immediately evident. Veteran CB Mykael Wright does an excellent job staying in a good trail position. However, Olave does an even better job of not reaching out early, plucking the ball at the latest possible moment.

Let’s show off a little! This catch is the most obvious example I could find of Olave’s ability to let the ball travel. This pass is on a rope, and Olave still is comfortable letting the ball travel past his helmet. This talent is not teachable and is our final example of Olave’s naturally-given ability.

I have little doubt that Chris Olave’s dynasty value will be a point of debate in the months leading to rookie drafts. As we begin parsing the massive amounts of information available, several aspects of Olave’s profile are likely to be considered limiting factors by the fantasy community. First will be his status as a late-declare. In a class where eight of my top-10 WRs are coming out in their first year of eligibility, several of whom have better early-career production, it’s fair to nudge Olave marginally down the board on this factor alone. Second, and a factor we have yet to mention, is Olave’s narrow build and lean frame tend to alienate a segment of the community who pretend that well-built WRs are the path to a sustained target volume.

While wrong on premise, this factor leads us to the third and most challenging problem to reconcile, why was there never “alpha” production for Chris Olave, and can we expect it at the next level?

Without disparaging any Ohio State WRs currently or formerly on the Buckeye roster, it’s fair to question why Chris Olave could never harvest more targets and production early on in his career. Terry McLaurin and Parris Campbell left following Chris’ freshman season, and as a sophomore, Olave shared targets with Austin Mack, Binjimen Victor, and KJ Hill. In 2020, after Mack, Victor and Hill left school as NFL hopefuls, 2022 NFL Draftmate Garrett Wilson ascended to even with Olave on the depth chart and target pecking order. 2021 furthered the drop in status at Ohio State, as both Wilson and ultra-talented sophomore Jaxon Smith-Njigba were more critical to the Buckeyes weekly success.

I mentioned former Buckeye McLaurin, and a similar production-based narrative could’ve, and was, raised for him as a draft prospect. Particular players’ skill sets are more functional in the NFL than CFB, and occasionally you get a player maturing at just the right time that his draft price doesn’t catch up with the late development. McLaurin meets some of those outlier qualities. Many of those same nuanced skills are present when observing Olave on tape.

However, considering you are paying first-round prices in most scenarios to acquire Olave, he has a sizable amount of downside compared to McLaurin as a prospect. Without the benefit of draft capital or Combine information, I have Olave ranked as my WR5 in the upcoming class. I won’t be afraid of acquiring shares if I find myself stuck on the clock, but there are only a few players worth moving up boards for this year, and Olave isn’t one of them.

That’s all for now, Nerds! Thanks for reading. All game clips shown above can be found in their entirety on the best scouting archive in the dynasty marketplace. Join the #NerdHerd to gain access to an incredible film database. Dominate trades and quickly assess team value with the DynastyGM tool. Finally, gain access to rankings of every variety and scoring format from our nerds’ contributors. A special thanks to those within our Nerdy community who do the hard work of editing these film clips. Shoutouts this week go to Matt Cooper (@Devy2DynastyFR) and Erik Kortz (@EKBaller) for the Olave film! Please give them a follow-on Twitter.