@Glosser13 takes a look at the next big time LB from Alabama, Christian Harris. 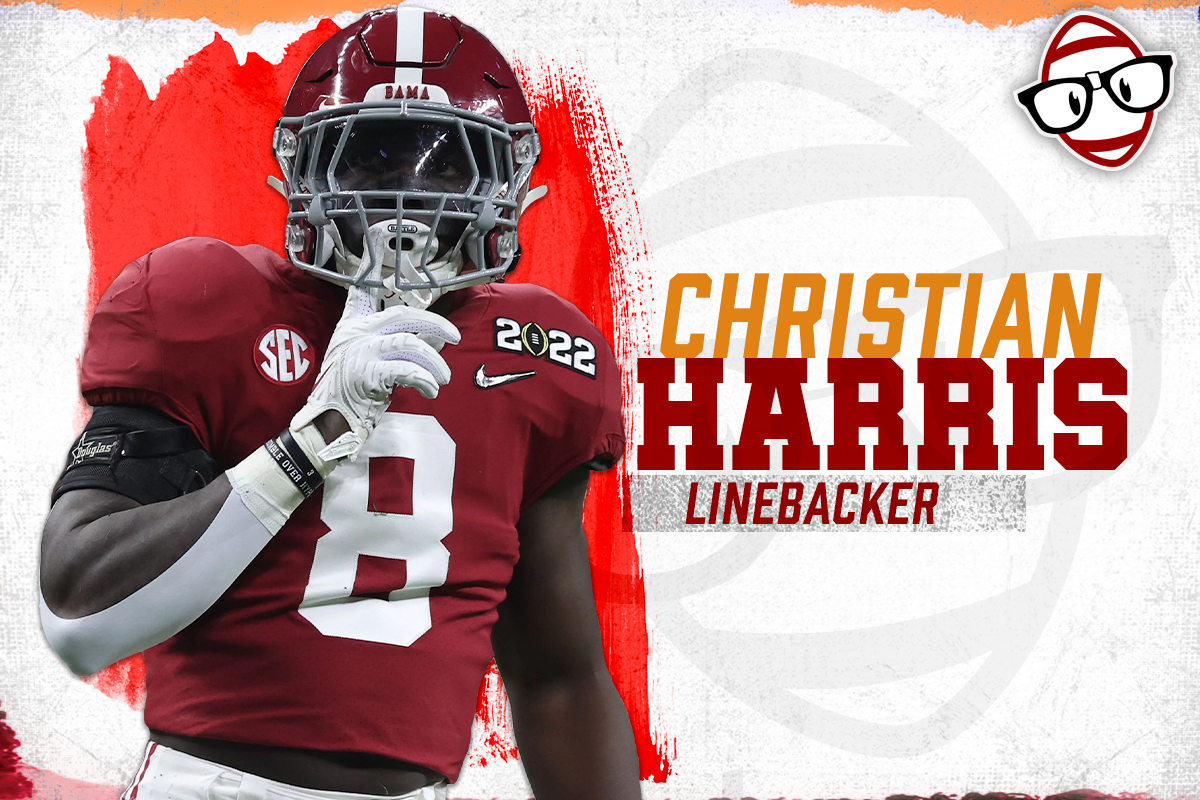 Harris is a native of Baton Rouge, Louisiana where he played for University Lab in High School. Harris played on both sides of the ball in High School; as a wide receiver and defensive back. He was a big part of the University Lab’s back-to-back Louisiana Division II State Championships in both 2017 and 2018. Over his last two seasons, he helped University Lab win 26 consecutive games. He was also selected to play in the All-American Bowl. Harris is a four-star recruit, ranked the #6 inside linebacker, and the #5 player from Louisiana in the 2019 recruiting class.

Harris found himself starting 12 of 13 games as a freshman. He was named to the USA Today Freshman All-American team as well as being named to the Freshman All-SEC team. Harris led all freshmen with 7.5 tackles for loss, and his 63 tackles ranked seventh in the SEC among first-year players. Harris turned in his best performance in his first year in the Citrus Bowl against Michigan. In that game, Harris recorded his season-high nine tackles including two for a loss and one pass break up.

The Baton Rouge, Louisiana native started at the Will LB position as a sophomore for the Alabama defense. Harris was named a semi-finalist for the Butkus Award after finishing second on the team in tackles (79). Harris was also named Defensive Player of the Week six times by his coaches. He was able to improve his tackle numbers from his freshman to sophomore seasons, his biggest improvement was in impact plays. Harris managed 4.5 sacks and an interception as a sophomore. The Alabama LB played his best football down the stretch, recording five tackles and an interception in the Rose Bowl. He followed that up with a team-high six tackles in the CFP National Championship in a beatdown of Ohio State.

It was a foregone conclusion that 2021 would be Harris’ last season in Tuscaloosa. Harris was named to preseason Butkus, Lombardi, and Nagurski Award lists while also being named a preseason AP All-American. Harris would improve his tackle numbers for the third straight season and record a career-high in sacks (5.5). Despite Alabama not being able to capture back-to-back CFP National Championships, Harris finished his collegiate career in style.

Harris is built in the mold of many LBs who thrive in the current NFL game. He has great speed for his size. One of the things I like most about Harris is how, although he’s fast and can get to the perimeter in a hurry to stop ball carriers, he rarely overcommits himself. Harris takes short steps before deciding what gap he will fill in run support or what zone he will cover. This is a very calculated strategy that helps a player diagnose first and react second when a play is developing. Even the most skilled and athletic LBs have a tendency to overrun plays or react before truly reading where the play is going. Harris’s unique ability to keep himself patient while reading his keys before deciding where the play is going will be something defensive coordinators love about him during the pre-draft process.

A huge plus to the Alabama LB’s game is his understanding of zone coverage and who the biggest threats are. There have been numerous occasions where Harris is pointing out the opposing quarterback first read to his teammates so they are aware to take that away. The Alabama LB has the speed and physicality to take away seam routes. He just understands coverages very well with his background of playing defensive back in High School. I believe Harris is going to make an NFL team very happy with his ability to understand coverages. His ability to be in the right spot on passing downs is a huge plus.

This part of Harris’ game is very underrated. Harris uses his past experience as an offensive player to set up blockers with his eyes before shooting a gap on a blitz. Harris has recorded all 10 of his career sacks in his last two seasons. I couldn’t help but see some of Darius Leonard in Christian Harris from a blitzing standpoint. The way that Leonard sets up an offensive lineman with his eyes before deciding how he’s going to get in the backfield is something I see in Christian Harris. They use their length and speed to make the linemen guess before they shoot the gap. This makes it extremely difficult for them to be predictable and they can create QB pressures routinely.

I’m not overly concerned about this, as it’s something we commonly see in college prospects. The ability to get away with flying around and arm tackling ball carriers at the collegiate level creates bad habits. At the NFL level, you rarely are able to bring players down like this. As a rookie, one thing that will be drilled into his head will be fundamentals as a tackler. I believe this is an easy fix for him, and nothing I would count against him in the pre-draft process. Harris has at least 61 tackles in each of his three seasons at Alabama. His ability to bring down ball carriers should not be a big question for dynasty managers.

I wasn’t prepared to call this a ‘weakness’ however, I do believe this is a part of Harris’ game that can be improved. The Alabama defensive front has rarely needed LBs to become high-volume tacklers. Especially in the run game because of how good their defensive fronts have been over the years. Harris is nowhere near a poor run defender but his ability in coverage and as a blitzer is far superior. As an IDP dynasty manager, we often would prefer the player who possesses the skills as a three-down LB over those who excel more on early downs. The fact that Harris isn’t as good of a run defender as he is in the other phases of his game should not affect how you view him as a prospect at all.

We saw how quickly an impact LB can turn around an NFL defense which was the case with the Dallas Cowboys last season. Now don’t get me wrong, Harris isn’t nearly the player that Micah Parsons is. However, he can be a difference-maker for any defense. I would gather to guess Harris would be a day two or day three pick making him an option for a current playoff team that has a need. The Los Angeles Rams are a team that could definitely benefit from an LB like Christian Harris. The Detroit Lions, Jacksonville Jaguars, and Denver Broncos are all other landing spots that could make sense for the Alabama LB.

The first year is the hardest to project for rookie IDPs in dynasty fantasy football. Knowing what we know about Harris the player, I wouldn’t rule out him making a year one impact. Last season, Kansas City Chiefs rookie LB Nick Bolton finished with 112 tackles while Washington Football Team’s LB Jamin Davis finished with 76 tackles. I wouldn’t be surprised if Harris can find an early-season starting role so that he can put up similar numbers to Bolton and Davis as a rookie.

The Dynasty Nerds team has you covered with rookie profiles, Nerds scores, and the Nerds’ film room to make sure you are informed on all the prospects before the NFL Draft and before your league’s rookie drafts. We encourage you to use all the resources available to you to get the edge on your league mates. Feel free to reach out to any of the members of the Dynasty Nerds team with questions all off-season as we prepare you for another winning season in 2022.