The 2022 draft class is taking shape and this year’s group of quarterbacks are as polarizing as ever. Justin Hulsey (@FF_Hulsey) looks at Cincinnati QB Desmond Ridder in this rookie profile. 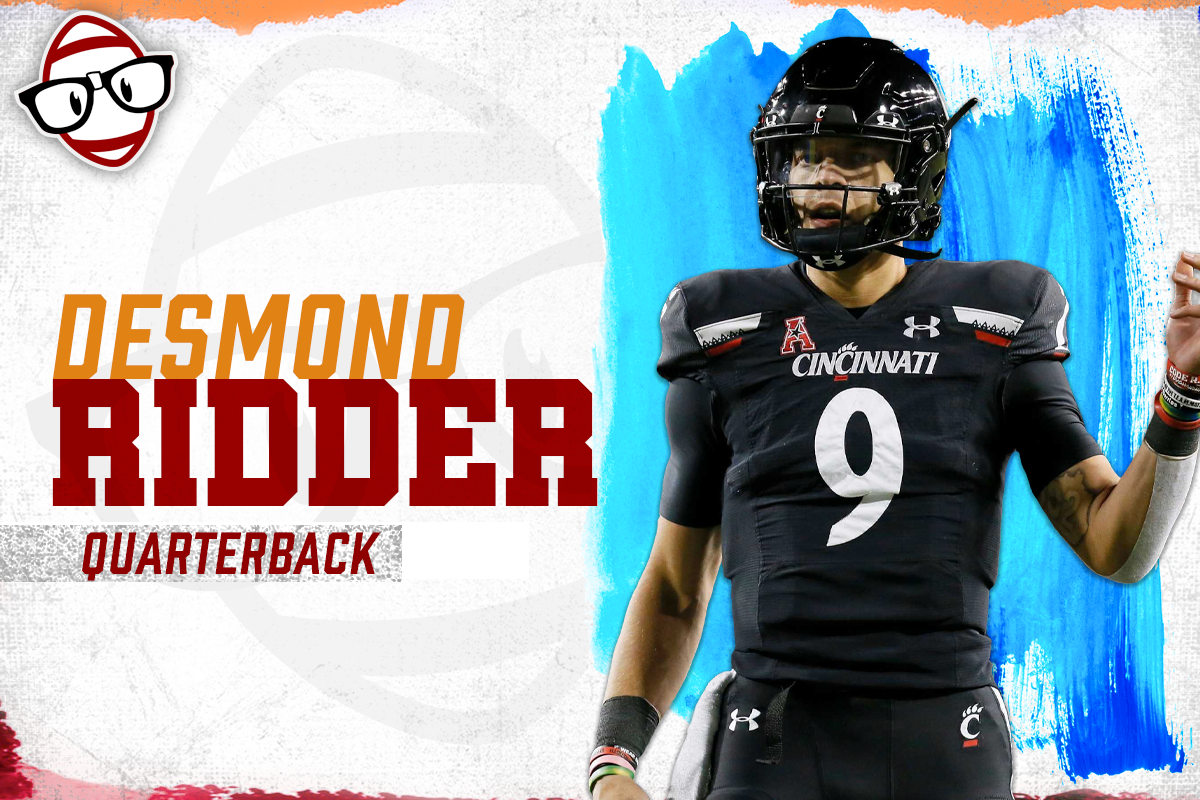 Ridder was a three-star recruit coming out of St. Xavier High School in Kentucky with very little interest from major college football programs. Most scouts viewed him as an intriguing dual-threat prospect with under-developed passing ability and a lanky frame. Heading into his senior season, Ridder held just two college offers; Eastern Kentucky and Cincinnati. He joined Luke Fickell at Cincinnati and found immediate success, flashing huge potential as a redshirt freshman while leading the Bearcats to an 11-2 record. Ridder was named AAC Rookie of the Year after totaling 25 touchdowns and only five interceptions in his first season.

Ridder dominated at Cincinnati with a record of 44-6 and threw 87 career touchdowns, the most in school history. While he fell short of the ultimate goal of getting to a National Championship, he finished his career as the nation’s winningest active quarterback and is one of just three all-time to win 44 games as a starter (Kellen Moore, Colt McCoy). Ridder’s top moments at Cincinnati include arguably the biggest win in school history in which he accounted for over 300 yards and three touchdowns on the road against Notre Dame. He also led the Bearcats as they reached the College Football Playoff, becoming the first non-Power Five program to do so.

Now Ridder enters a critical three months for his NFL Draft stock. The 2021 quarterback class was historic and impossible to emulate, whereas the 2022 class feels like an open competition at the moment. Each of the top prospects in this group has flaws, nobody has made a particularly strong case for QB1, and nearly all of them will be competing against each other at the Senior Bowl. Not to mention the NFL Combine and pro days that will follow in March.

Ridder returned for his senior season after receiving feedback that he was considered a fourth to sixth-round pick in the 2021 draft. Now, he has an opportunity to solidify himself as one of the top four or five quarterbacks in the 2022 class and possibly earn the Day 1 draft capital that dynasty managers covet. As my QB5 in the class, there is plenty to like about Ridder’s skillset to go along with some noteworthy concerns. Let’s dive in.

The obvious strength of Ridder’s is his unique athleticism for the position. In the NFL, he will join a growing contingent of dual-threat quarterbacks. That provides a safe floor for fantasy production if/when he secures a starting role. I think a sub-4.6 40 time is possible, and as you can see below, he is a natural open-field runner with speed. Jalen Hurts ran a 4.59 40 at the NFL Combine, and I expect something very similar for Ridder. Ridder rushed for 2,180 yards and 28 touchdowns in four seasons at Cincinnati. He is more than capable of a rushing threat, and I believe that ability will translate better for Ridder than prospects like Sam Howell and Matt Corral. Both of whom amassed huge rushing totals but mainly with functional mobility that does not always translate to the next level.

In addition to breakaway speed, Ridder has the escapability to get creative in the pocket and extend plays. This is the most impressive part of his game and one of the areas where he stands above most of the other quarterbacks in this class. He senses pressure reasonably well and knows when to take off with Kaepernick-like long strides. Against easily the most athletic defense he saw all season, Ridder was able to escape the pocket and avoid negative yards on this play.

Ridder has good velocity on his short-intermediate throws an impressive touch on deep passes down the sideline as a passer. He has above-average arm strength and delivers the ball with zip. Ridder is excellent at spreading the ball around and had seven receivers with at least 20 receptions this season. He makes one or two “wow” throws every game that reminds you of his arm talent and ability to make every NFL throw. This dime against Notre Dame between two defenders was one of his better throws of the season.

The intangibles are a major strength of Ridder’s as well. By all accounts, he is a high-IQ player and an exceptional leader. He has an advanced feel for the game, and when given time, he reads defenses well and makes great pre-snap adjustments.

Desmond Ridder has physical traits, but it’s his processing that has me so high on his potential. Both pre and post snap.

Watch this play from the EZ view. Ridder slides the OL’s protection into the CB blitz. Tells the RB where his eyes should be. Then calmly hits the hole shot. pic.twitter.com/7GtBJKkeJd

The most glaring weakness of Ridder’s skill set is his accuracy or lack thereof. His film is littered with pass attempts that are overthrown, underthrown, behind the receiver, and just off the mark. There are too many plays where Ridder fails to allow his receiver to gain yards after the catch. His 62% career completion rate is low considering the competition and padded with high-percentage screen plays. I was hopeful that Ridder would improve in this area during his senior season. Alas, the accuracy issues from earlier in his career troubled him in 2021.

Ridder will deliver a great throw that makes you forget just how frustrating these misses are. There has to be more consistency in his game and better touch on some short-intermediate throws. When facing pressure, he struggles with the game’s speed and processing information during the play. Multiple times on film, you will see him get panicked easily when faced with an effective pass rush. The Alabama semi-final game was his biggest opportunity to date to elevate his draft stock. He made two impressive throws in the game, but, by and large, the moment seemed too big for him.

Ridder has a Day 2 grade for me. I am confident that he will be a top 50 pick in the NFL Draft, especially if he has a solid Senior Bowl week. That does not mean you should draft him as such in your dynasty leagues. He is likely a developmental prospect at the next level, which you will have to be very patient with. The accuracy issues and appearing overwhelmed by the pass rush are significant concerns. He can make all of the throws and is athletic enough to become a fantasy producer in time, but I do not expect to have many shares of Ridder. I would feel comfortable taking him in the mid-late second round of a 12 team Superflex rookie draft. An NFL team will reach for him in the draft. I expect one of your league mates likely will too.

Visit the Dynasty Nerds Prospect Film Room today for access to a full library of game tape of Desmond Ridder and dozens of other college football prospects.

Become a member of the #NerdHerd and gain access to the prospect film room, members-only podcasts, Nerd Scores, and more for just $4.99 per month.