The former Ole Miss receiver will likely see day three Draft capital, where does he fit in the NFL? 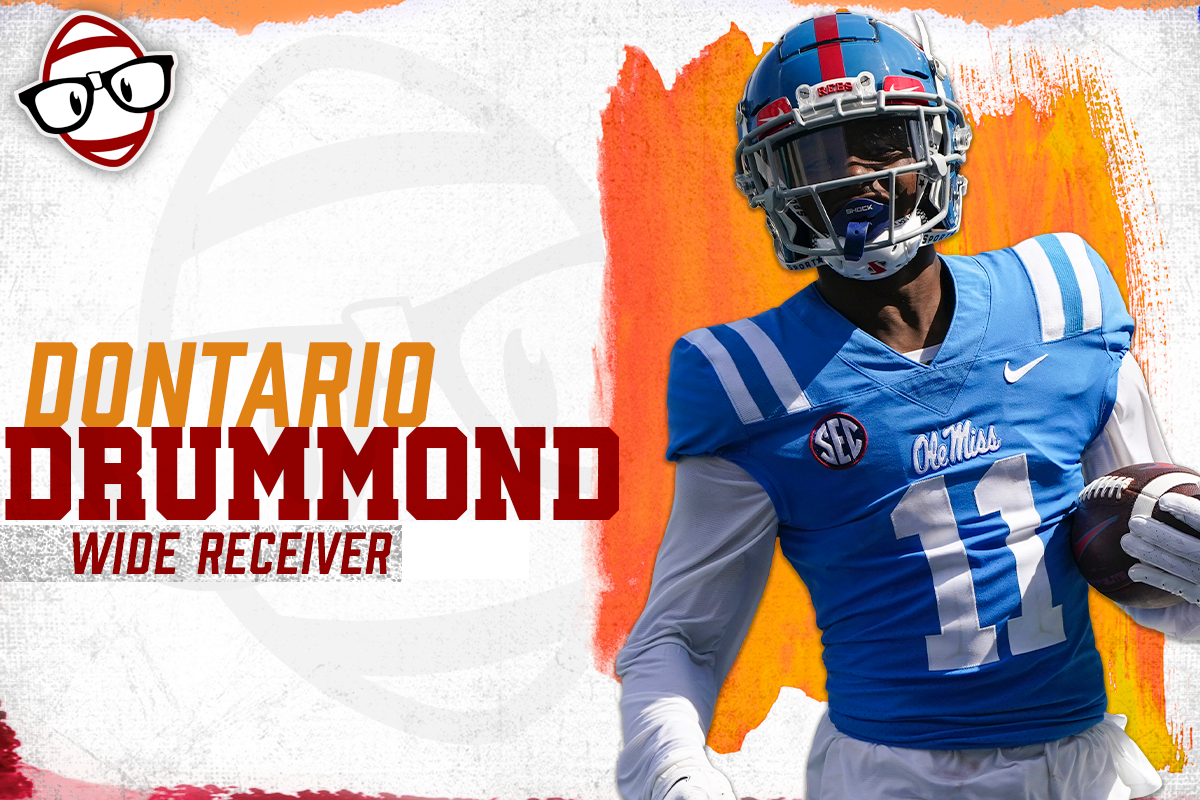 Upon his arrival to Oxford, Mississippi, Lane Kiffin gave the Rebels offense a complete facelift. He did so by utilizing the offense around Matt Corral and their weapons on the roster. Kiffin turned Corral from a wild gunslinger to a potential first-round pick and, in the process, boosted the stock of his receivers, including Dontario Drummond.

Drummond got some eyes on his game after the 2020 season debut, where he had just two catches, but both went for touchdowns while also gaining 60 total yards. From there, he had performed well enough to bring us to today, where he is now a viable option potentially in upcoming rookie drafts. Ultimately, the report will make that decision for you.

Drummond took the long path to Ole Miss that started in Scuba, Mississippi, at a school the world has become familiar with in East Mississippi Community College. Coach Buddy Stephens and his high-powered offense were able to produce early and often with Drummond as a centerpiece of it all. He was the seventh-ranked JUCO prospect in Mississippi and was a first-team NJAAC All-American, and with that honor, it brought a lot of big schools to his attention recruiting him. He chose Ole Miss, but he also had offers from Arkansas, Kansas, and Colorado State.

2019 didn’t see Drummond contribute much, but upon the arrival of Lane Kiffin, he saw his role increase four times over. As mentioned above, he had a very impressive start to the season against Florida. He did enough all year to gather an impressive enough stat line to earn him additional hype. Before his 2021 campaign, Drummond garnered enough hype that even Phil Steele took notice and had him as a third-team All-SEC selection. From there, though, his legend grew.

In 2021. he exploded for his biggest season since leaving Last Chance U and, in doing so, raised both his and his quarterback’s stocks. Corral is a great QB, but even in college, to stand out, you need a star receiver, and Drummond fits the bill. He saw career highs across the board for all his stats and performed well enough to declare early for the 2022 NFL Draft.

Drummond can be prone to a lot of slot and underneath work. But that doesn’t stop him from making a play now and then. His effort is always on display, with or without the ball in his hands, and it is what gives him an astounding 14.3 yards per reception despite the short game he works with.

He constantly demonstrates on film how he can take any touch and turn it into a first down or a score even. His effort paired with his physical gifts makes him an interesting prospect for any team once he is drafted.

As mentioned earlier, his work mostly consists of the short game and underneath work, but that doesn’t mean it’s for lack of route running prowess. He demonstrates an ability to run clean routes and even possesses a decent route tree.

He can still be knocked off routes from time to time due to his size and strength, but his route running ability is something to feel reassured about him if you are a fan.

I just hinted above that Drummond is prone to some issues regarding his strength. He can get knocked off routes, he can lose yards at times due to contact balance, and he cannot provide much help with run blocking.

The more concerning of all his issues are the number of concentration drops he is privy to. Some of them can come at critical times of games, as I have witnessed, and they even can happen early on or at the beginning of a game.

Drummond is a very fun and good receiver in the college ranks, and he has the chance to be the same thing in the NFL, but he has a lot of growing to do. I project him to be a day three pick in the NFL Draft, making him a later-round pick in your rookie drafts when the time rolls around. Drummond may produce right away in the right system, but he may take some time to marinate in the NFL before becoming something more than a team’s rotational play.