Drake London is one of the top WRs in the 2022 NFL Draft – Woo Lee has the lowdown on London’s game and how we should value him in rookie drafts. 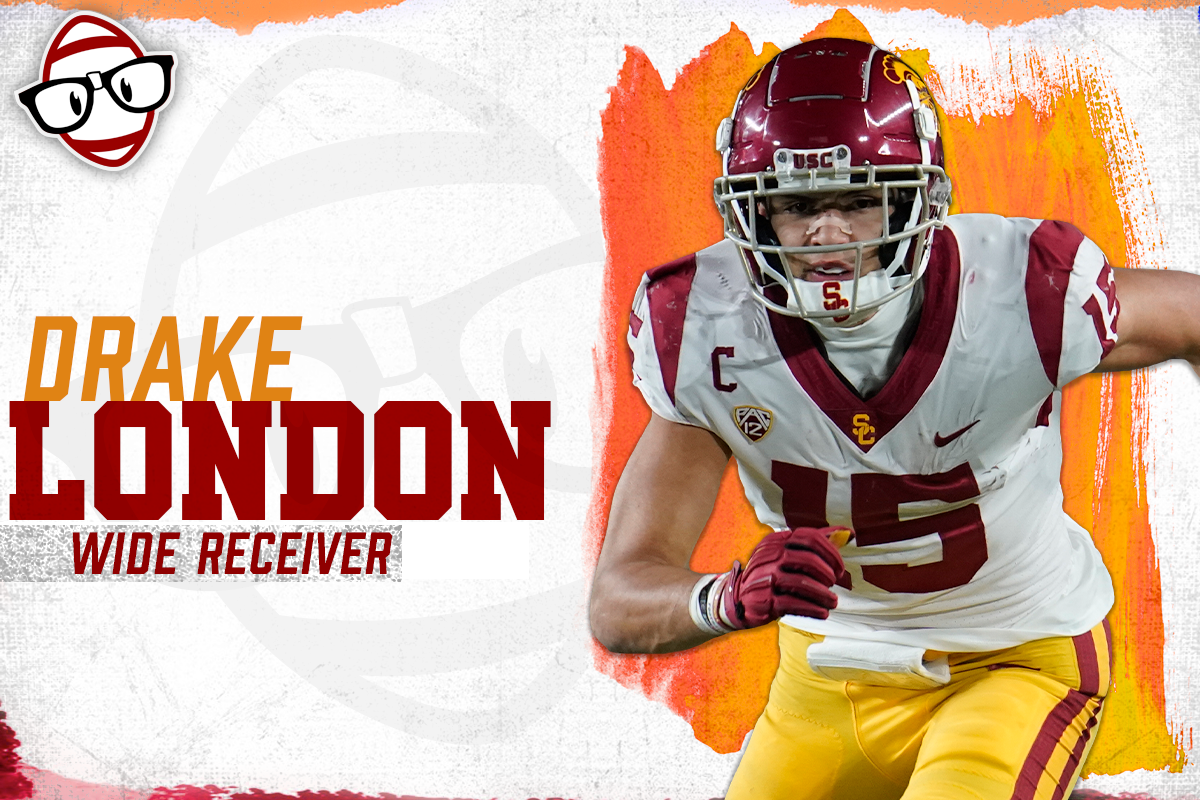 Before suffering from a fractured ankle injury, the former USC WR dominated in college. Before the injury, London was regarded as one of the top WRs in this class and was firmly in the conversation of the best WRs in the 2022 draft. London will be a strong target for NFL teams this draft, but is it a strong target for your dynasty team? Let’s take a deeper look.

USC had a horrific season in 2021. The team finished 4-8 and played average, to say the least. There was a lone bright spot for the Trojan offense, Drake London. London caught 88 receptions for 1084 receiving yards, along with seven touchdowns. He became the focal point of the offense. The next closest receiver in receptions was Tahj Washington with 54 receptions.

Even with average QB play, London still shined and terrorized opposing defensive backs. He was on pace for a historic season with the Trojans until he suffered a season-ending injury to his ankle.

London has the optimal size to become a terror in the NFL. With his height of 6′ 5″ and weighing in about 210 lbs, he has the size to battle with the top defensive backs in the NFL. He has the size to be a dominant number one receiver and could be a match-up nightmare for any defense. Coming into the NFL, he will be a difference-maker from day one. His large target share and involvement on a USC offense ranked 65th out of 130 eligible schools proves that he can be the number one option for a team.

London, from afar, is an amazing, contested-catch specialist. When the ball is up in the air, he will be able to go up and get the ball. Because of his size and strength, London was a mismatch for any defensive back on one on one coverage. Here, London is covered, but he goes up and gets the ball over the defender.

Looking deeper into his contested catch ability, London has excellent body control while in the air. He adjusts so well in the air that he gains that slight advantage over defenders. This is another example of how good London is in contested catch situations. Here he adjusts his body to the most advantageous position to catch the football. He knows where the football is in the air before the defender, and he kind of moves the defender out of position.

In addition, to his body control and positioning, he has excellent hands. If it’s near him, he will make a play. London had numerous moments during the season where he made something out of nothing. He has spectacular catching ability, which translated to big playability. Here the defender played great coverage, but London made a better play. He went up and caught a tough contested ball.

London was dominant all season. If there was one-on-one coverage, everybody on the football field knew the ball was going to London. Here is another example of him making a spectacular catch over a well-defended play.

In addition, to his vertical and contested-catch abilities, he is a great route runner. USC used him on all three levels of the field. London can create space with his route running. Here is a simple five-yard slant. Because of his big-play ability, he made the defender turn his hips to the outside to cover the go-route. London makes a sharp slant at the five-yard line in which the defender now must readjust his hips to catch up with London.

Here, London runs an out-route for 15 yards. He split the safety and the corner and kept his feet in bounds to extend the drive.

His most ran routes were deep, and this is just an example of how deadly a weapon London was downfield. This is a great double move to make the defender decide on covering the out route or the go route.

Lastly, London is great running after the catch. He might not have elite explosiveness, but he is fast when he gets into stride. Along with his speed, he is a strong runner. He isn’t afraid to take the contact to gain the extra yards. He is a tough runner looking to put his shoulders down and earn the extra yard for his team. He doesn’t have an explosive release here, but he beats the defender with straight speed.

London is a complete receiver, but there is a glaring weakness. He doesn’t have explosiveness and acceleration. He has the speed when he is in stride but looks slow off the line of scrimmage. London can be shifty and juke defenders, but he doesn’t have the acceleration to get away from the defender when he makes those quick moves.

London is a top-three WR in the upcoming NFL draft. With the combination of size, contested catchability, and route running, he should be an instant difference-maker for a team looking for that alpha-type receiver. Drake London should be a great value in the middle and later first rounds in the dynasty. Depending on the landing spot, he has the potential to be an instant WR1 for fantasy.

London is a tremendous talent and value for dynasty managers looking to move down in this year’s draft. London will be an excellent asset for dynasty teams and should be considered a top priority pick in the first round in this year’s rookie drafts.