Coastal Carolina TE Isaiah Likely has the potential to be a fantasy producer at the next level. @Glosser13 gives you his breakdown. 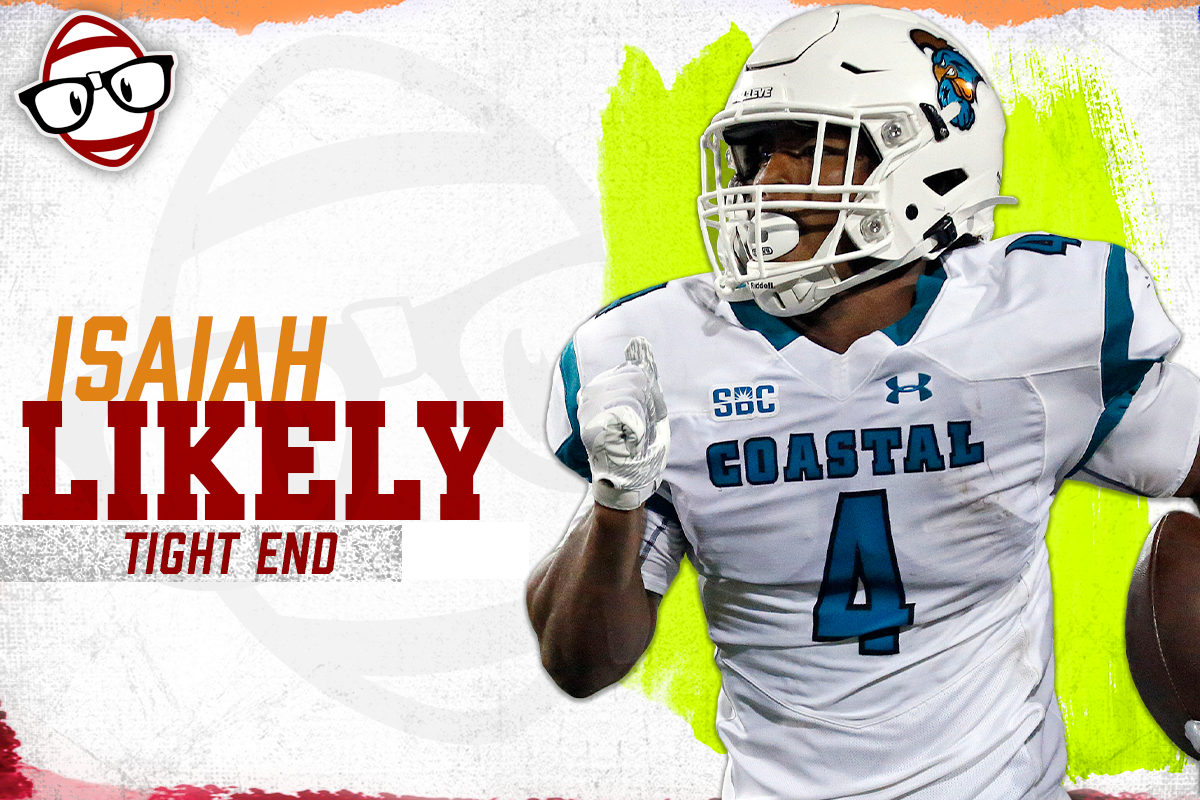 Isaiah Likely is a native of Malden, Massachusetts, who was ranked as a 2-star recruit according to 247sports. Likely was recruited as an athlete in the 2018 class. Likely deserved more respect coming out of Everett High School. He racked up double-digit touchdowns in both his junior and senior seasons. The Coastal Carolina TE is looking to become just the second player from the school to be selected in the NFL Draft in the past six years. He was also invited to the Reese’s Senior Bowl in February.

Likely only appeared in seven games as a freshman, but he did manage to make an early impact for the Chanticleers. The former WR turned TE scored five touchdowns on his twelve receptions in his freshman season. The Coastal Carolina TE played his best football in his first season. He hauled in eight receptions for four touchdowns in his final three games.

Likely made a name for himself during his last two seasons with Coastal Carolina. He recorded 89 of his 133 career receptions and 1,513 of his 2,050 career receiving yards. Likely was also able to lead the Sun Belt Conference in receiving touchdowns (12) in 2021. He was named to the first-team All-Sun Belt Conference team, and also was named a semifinalist for the John Mackey Award. Isaiah Likely became just the fifth player in the school’s history to eclipse the 2,000-yard mark as a receiver.

The biggest compliment you can give an incoming rookie TE is being a reliable option for your quarterback. Likely is very good at finding openings in the first ten yards of a route. His route running in short areas is excellent. He routinely proved how valuable of a target he was in his final two seasons while being the number one option in the offense. Likely was able to get many free releases off the line playing against weaker competition. That lead to him winning on most of his shorter routes.

Likely has been called a ‘matchup nightmare’ for a good reason. His willingness to block deserves some credit as well. Likely committed himself to block in the run game, and it showed last season. He is more of a complete TE than we give him credit for. He has a very high ceiling at the next level if he continues to improve like he has since he stepped on the Coastal Carolina campus.

If you want to stand out as a small school prospect you need the skills that scouts are looking for. The Coastal Carolina TE has a remarkable ability to haul in tough catches. Likely routinely makes catches in traffic or with defenders in the area. His ability to high point the ball and create separation with his body is very reminiscent of what NFL TEs and WRs do. He has shown the ability to make these adjustments on bad throws and in zone coverages where he needs to create space that doesn’t appear to be there at first glance. This is a skill that some WRs entering the NFL don’t possess. A young TE to have this ability early in his career is a huge plus.

Likely had his chance to make his first impression on an NFL coaching staff at the Senior Bowl. The area I would like to see improve the most is attacking the seams and second level of the secondary. Likely has shown he can stretch a defense. If he can prove to do it more consistently, it would go a long way to improving his draft stock. The NFL TEs who have the most success are matchup problems on linebackers and safeties. At this point, Likely will need to prove he can win consistently against better athletes to become a producer at the pro level before his rookie contract is nearing its end. If there’s any small school prospect to bet on, Likely is a good bet seeing as how he has improved in areas of weakness every year.

Playing To His Size

This point may be considering nitpicking slightly but when you watch the film it doesn’t appear Likely is a 240 lbs. TE. It could be attributed to playing a lower level of competition than we are used to in the Power 5 conferences. It does appear Likely is more built in the mold of a bigger WR. His ability to make plays as a move TE will be the reason an NFL team drafts him early on day two or day three. Once Likely enters an NFL training facility, he will be given every opportunity to add muscle and weight. This is a minor critique of a prospect that is noticeable on film but overall he will know how NFL-ready his body is for the grind of a long football season.

The impact of rookie TEs is usually minimal. Florida’s Kyle Pitts spoiled dynasty managers with only the second 1,000 yard season for a rookie TE. Dynasty managers have to be patient with this position. Make no mistake about it, Likely is a weapon, and with the involvement of the TE in NFL offenses these days there’s a spot for him. The NFL teams who like to utilize 22 personnel are likely to spend an early pick on him. The Jacksonville Jaguars, Arizona Cardinals, Indianapolis Colts, and Green Bay Packers are teams that could benefit from the services of Likely. As a dynasty manager who has invested in Likely in a Devy league, it would be advantageous to see him paired with an established QB. I believe this would ensure his best chance at success.

The dynasty impact from rookie TEs is minimal at best. In an article I wrote during last season about the TE position, data was provided showing just how rare it is for instant production. This is where less than 20% of the players have a top-12 season at their position of those drafted since the 2016 NFL draft. However, it has shown that averaging over nine points per game would make a player a top 12 TE, this goes back ten seasons. In the NFL it’s no secret the more snaps you play the higher chances you have of being a valuable dynasty asset.

The landing spot and draft capital of rookie TEs can be tempting. When using historical data, you can save yourself some heartache by steering clear of drafting them early in rookie drafts. It’s hard at times not to fall in love with a player’s skillset. Especially when they are drafted by a team with a weak depth chart at the TE position. Likely can be a reliable fantasy producer almost as easily as he can become a backup TE who clogs up a dynasty roster spot. Dynasty managers should use their best judgment on what they are willing to pay given their roster build vs the production they are expecting to receive from the player.

The Dynasty Nerds team has you covered with rookie profiles, Nerds scores, and the Nerds’ film room. We want to inform you about all the prospects before the NFL Draft and before your league’s rookie drafts. We encourage you to use all the resources available to get the edge on your league mates. Feel free to reach out to any of the members of the Dynasty Nerds team with questions all off-season as we prepare you for another winning season in 2022.