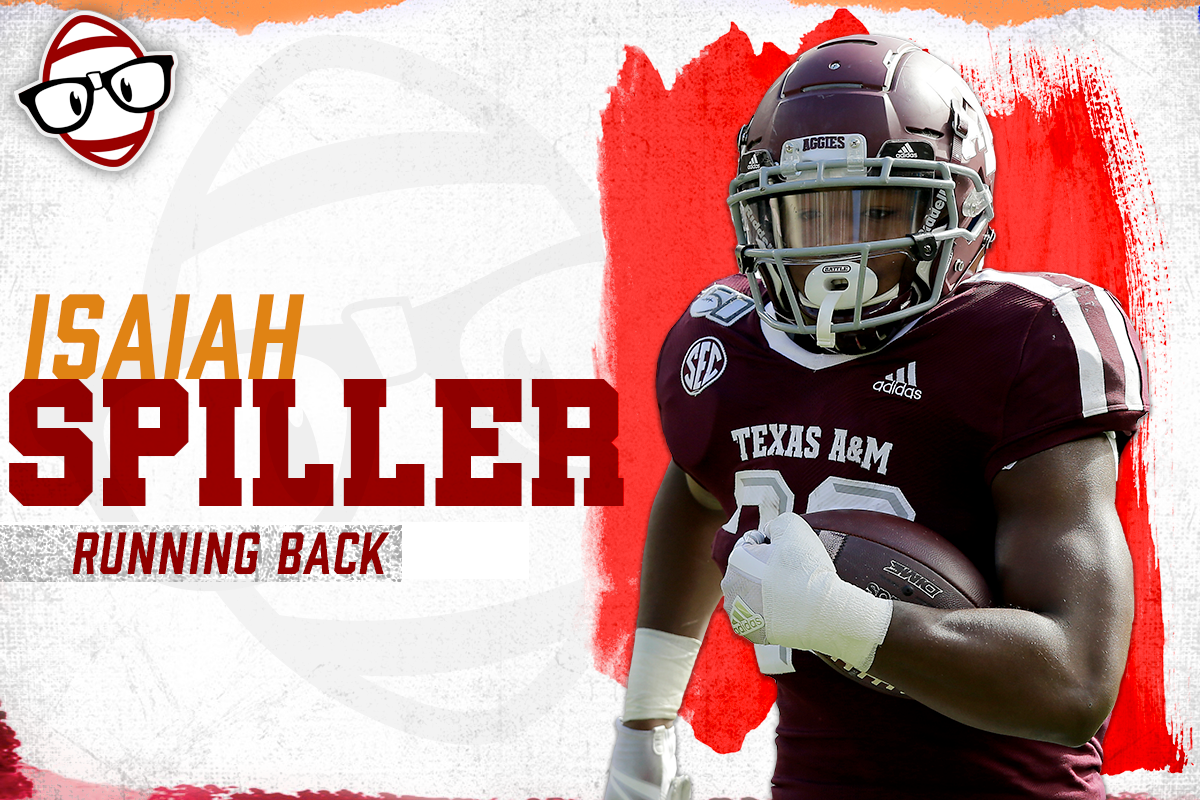 In the 2022 NFL draft, there are three top RBs in this year’s class. The three RBs are Breece Hall, Kenneth Walker III, and Isaiah Spiller. Spiller has a combination of speed and quickness with a blend of power. Though Spiller doesn’t have the same level statistics as Hall or Walker, Spiller shouldn’t be overlooked as one of the top RBs in this year’s draft.

Spiller was recruited by Texas A&M in 2019 and made an immediate impact. He was given 174 rushing attempts and produced 946 yards while scoring 20 TDs. He also added 29 receptions for 203 yards. Spiller’s success in his freshman year locked him into the workhorse role for the Aggies. In 2020, he retained his workhorse role for the Aggies. Spiller rushed 188 times for 1036 yards while also adding 9 TDs. Spiller also added 20 receptions for 193 yards. He helped the Aggies win the Orange Bowl against the Tar Heels.

In 2021, Spiller once again assumed the lead RB role for the Aggies but had a bit of competition in the backfield. Though Spiller’s workload was split, he was still given 179 carries. He produced 1011 rushing yards and scored six touchdowns. He also added 25 receptions for 189 yards and scored a touchdown. Overall, Spiller had a solid junior year, and he still maintained the efficient running by producing 5.6 yards per carry.

Spiller has been given the workhorse workload in his entire career. Though Spiller was the lone workhorse RB for the Aggies, he has never exceeded the 200 rushing attempt mark. This lack of wear and tear will allow Spiller to have longevity in the NFL. Coming in at 6’1’’ and 215lbs., his size is optimal to handle the workload as a workhorse RB in the NFL. Looking back at his 2021 season, Spiller has proven to be an effective runner. His 1,011 rushing yards on 179 carries averages 5.6 yards per carry. Spiller was effective and efficient with his opportunities on the ground. The most encouraging part about his stat line is his involvement in the receiving game. His 25 receptions showed that he isn’t just a one-dimensional player, and he has the potential and ability to be an all-around RB.

Looking over at Spiller’s tape, he is quick on his feet. His feet never stop moving, and he uses his quickness to make defenders miss. He also uses this quickness to create and explode into holes. Here he makes a sharp cut and explodes through the hole.

Here, he hit the hole with speed and used his quickness to shake off the safety for a touchdown. Spiller’s speed and quickness are a tremendous asset for Spiller’s size.

One of Spiller’s greatest abilities is his vision. Spiller made calculated movements to open running lanes with his combination of speed and quickness. His ability to read and choose the correct holes in sync with his speed and quickness made him a dangerous runner for the Aggies. Here he reads the left LB (#8 for Alabama) and sees the DT (#84 for Alabama) waiting for him to come their way. He cuts the other direction to go away from the trap.

Here he runs to the left and then sees an opening in the middle of the defense. He makes a quick cut and explodes through the hole.

Along with his vision, he’s also a patient runner. He allows plays to develop then explodes. Here, he allows his two guards to get in front and then explodes into the hole. He did a great job waiting for the play to develop and understand that he has a bit of time instead of rushing straight in.

His last strength is his receiving ability. He was able to run routes while also taking on the role of the check down. He was a great receiving option out of the backfield for the Aggies.

Spiller was great with his speed, quickness, and explosiveness. Because of this, Spiller did not run with a power style. He is not the typical between the tackle or a pile mover. He tries to outrun or out juke the defender to gain yardage. Because of this tendency, it is a concern on short-yardage and goal-line situations. This habit can be developed and changed, so this weakness should change at the next level.

Another weakness is his tendency to wait too long or make too many moves. His greatest strength was his patience and ability to move his feet constantly. But this is sometimes his greatest weakness. There were times when he danced too much behind the line of scrimmage in which resulted in loss yardages. He is constantly looking for ways to outrun or out juke defenders when sometimes you just got to put a shoulder down and run right through them.

Isaiah Spiller is a top-three RB in the 2022 NFL draft. He is an all-around RB that can handle a workhorse-type workload. Spiller has the size, speed, and skills to be a dominant RB in the NFL. Spiller will have a long list of teams lined up to draft him. He should be a safe Day 2 draft pick in this draft. Outside of Breece Hall and Kenneth Walker III, there isn’t another RB with the size, speed, and ability like Isaiah Spiller.

In dynasty, he should be for sure locked in as an RB1. Spiller is an outstanding talent at the RB position and is a great landing spot away from being an elite option at the RB position in fantasy. He’s also very young (20 years old) with a lot less wear and tears on his body. Spiller should be an early first-round pick in the rookie drafts; if not, late first. If he falls outside of the 1.05, he is an absolute steal for any dynasty team.