Jahan Dotson is my favorite senior WR in the entire 2022 class. @ReflipeWThenuz breaks down why you should like Dotson too and why you should watch the Senior Bowl. 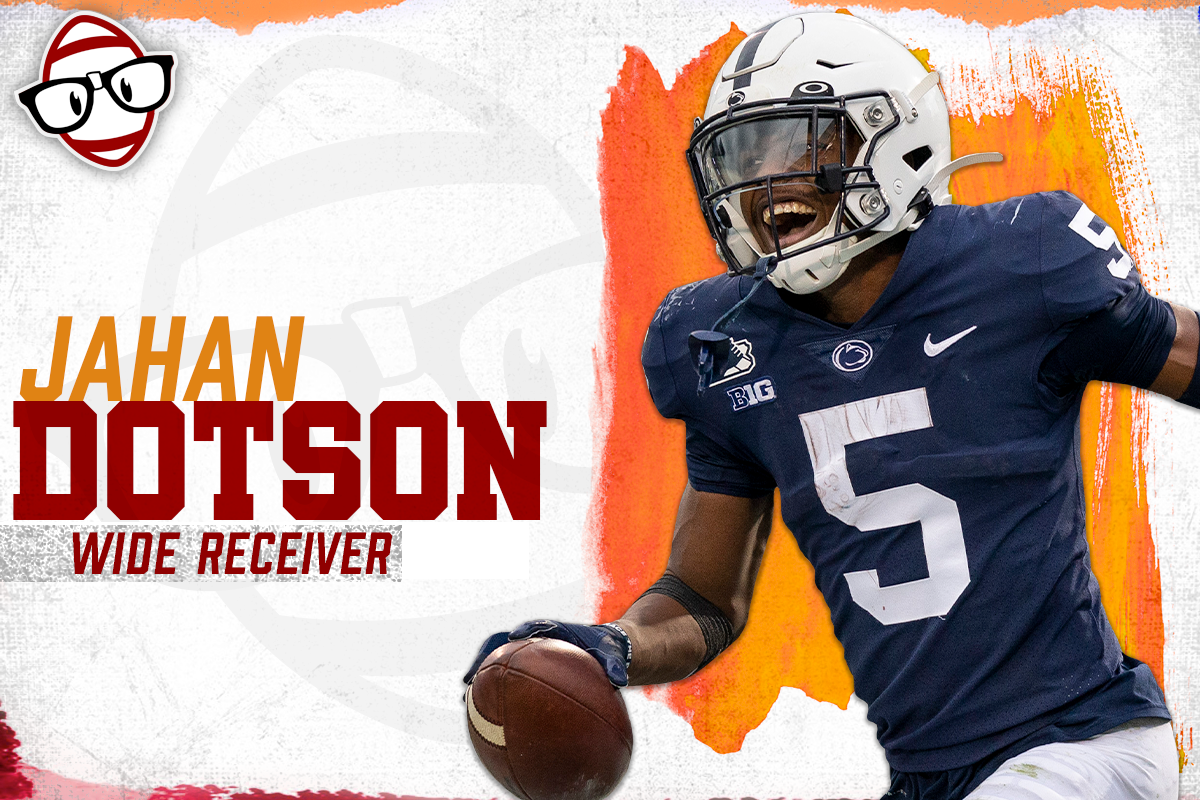 Despite the perception that the 2022 class is not deep in dynasty assets, there are certainly still many quality players preparing to enter the NFL. WR is quite possibly the deepest unit among the position groups in the 2022 crop. Amidst this group, Jahan Dotson stands out as one of the best of the bunch. This article will cover some of the strengths and weaknesses brought to the table by this outstanding prospect. Without further ado, let us dive into this 2022 WR prospect.

Jahan Dotson was a decorated football player and track athlete throughout his high school career. He spent three years at Nazareth High School in Pennsylvania, with his junior year being spent at the Peddie School in New Jersey. The speedy WR was an excellent 4-star prospect coming out of High School. 247Sports ranked him as the 36th WR in the nation. Some heavy-hitter programs recruited him, eventually choosing Penn State over Alabama, Clemson, UCLA, and Auburn, to name a few. You can see some of his High School films below.

What immediately jumps out when looking at Dotson’s Dotson’stats is the steady improvement from year to year. As a freshman, he made an immediate impact getting on the field and even starting a handful of games. From that point forward, Dotson took over more and more of the passing game despite sharing the field with Pat Freiermuth and KJ Hamler, both second-round NFL draft picks.

Dotson enjoyed a breakout junior season, leading the Big10 in receiving yardage during the Covid-19 shortened year. During that campaign, he had a massive coming-out party against an elite Ohio State Defense when he exploded for 8/144/3. Dotson carried over his junior season success into his senior campaign, where he put up his first 1,000-yard season. Overall, Dotson enjoyed a successful career at Penn State, finishing in the top five all-time in nearly every category. At this point, it is necessary to dive into the film and break down Dotson’s game.

The first thing that stands out when scouting Dotson is his speed. The Penn State WR played most of his snaps in college on the outside. However, as you can see below, the PSU coaching staff were willing to drop him into the slot to turn his speed into big plays.

By placing Dotson in the slot on the play above, he could use his speed to break the zone coverage. He drove behind the in-the-box safety while also overrunning the remaining safety to the endzone.

The play above was a beautiful example of concentration along the boundaries. Dotson could get both feet in bounds and still had the presence of mind to extend the ball above the pylon for six points. All while using his top-end speed to fly past the defender in the snow.

As with any good WR, speed is not enough. Having a quality set of hands and the ability to make contested catches in traffic and along the boundaries is an asset. Dotson has displayed that he can make catches in any situation on multiple occasions.

You will notice that the defender flashing in front of him did not break his concentration on the ball on the play above. Perhaps he should have attacked the ball a bit more, but it was a beautiful example of concentration through the process of the catch.

Dotson manages to keep his focus in a crowded situation and bring the ball in for a TD on the play above. It is debatable if the ball was intended for Dotson or Hamler, but Jahan didn’t allow the ball to hit the ground.

When examining Dotson’s Dotson’suickly becomes evident that he is not a one-trick pony. The talented senior ran just about every route in the book. While he may round off some routes at times, he nonetheless displayed the ability to run every route on the tree. Manning both the perimeter and the slot, you will see it all. From outs, crossing routes, fly patterns, screens, and everything in-between, there is a number of different examples below.

The play above is a beautifully executed out route. Dotson motions towards the hash to give more space along the boundary in the route. He manages to give his QB a good bit of separation and has the ball well in his possession long before the corner can close.

While certainly not the best-executed WR screen from an outcome perspective, Dotson nevertheless manages to bring in the ball and force the first defender to miss effectively, making something out of nothing. Routes like this have become popular in the NFL and will undoubtedly be a part of his game at the next level.

On this route, Dotson manages to gain inside leverage on the corner and press the ball towards the middle of the field, splitting the two defenders for a big gainer.

While it is true that you can get a skewed view of a player’s simply looking at a highlight film, you can still get an idea of their absolute ceiling by doing so. To that end, I would like you to look at highlights from a single game. That contest is Jahan Dotson’s pDotson’sce against Ohio State during his junior season. You will see some next-level skills in these highlights, including two of the best catches you will ever see in a football game.

While Dotson is certainly a high-level prospect whom I anticipate being drafted in the early portion of the 2022 NFL draft, he nonetheless has his flaws. One skill Dotson will have to work on at the next level is his strength. Due to his smaller stature, he can sometimes be jammed at the line of scrimmage and have difficulty gaining his release. He doesn’t do the best to fight through contact after the catch.

Dotson has a size and skill set reminiscent of several former and current NFL players. Names like Diontae Johnson and Darnell Mooney come to mind, but the player I see the most similarity to is Emmanuel Sanders. Both players can play every WR position on the field. They both use their speed and route running to win from the X, Y, or Z position. Despite their stature, they have excellent hands, loose hips, and the willingness to mix it up in the run game.

In a surprisingly deep draft at the WR position, Dotson finds himself in the top half of the bunch. While not the dominating physical specimen of a Treylon Burks, Drake London, or Jameson Williams, he has all the hallmarks of a quality WR in today’s NFL. He is likely to be drafted within the first number rounds of the NFL draft, and somewhere around the first and second round turn in your ppr dynasty drafts. Players with his skill set that incorporates speed, hands, and quick-twitch movements dominate with today’s limit the number of physicality defenders can bring to bear. Keep an eye on how Dotson does in the pre-draft process. His competitive nature has led him to accept an invite to the upcoming Senior Bowl, where NFL scouts and coaches will be paying close attention to him. I highly recommend you do the same.

Thank you for reading this article! Please be sure to join the #Nerdherd, so you don’t miss any of the amazing things we have to offer @Dynastynerds.com. Use my promo code DynastyHolliday for a 15% off discount. You will get rankings, extra podcasts, and access to our rookie film room. You can get access to our revolutionary DynastyGM tool for just a couple of bucks more. So much for so little, why miss out on all the fun. Also, you absolutely must check out our new mock draft tool. Please find it in your Apple & Android app stores. Follow me @ReflipeWThenuz for more dynasty content and other musings.