With the #NFLDraft rapidly approaching, @Spydes78 gives you the low down on a deep stash with big potential. Find out why Wisconsin TE Jake Ferguson is a name that you need to know with the latest in our 2022 Rookie Profile series. 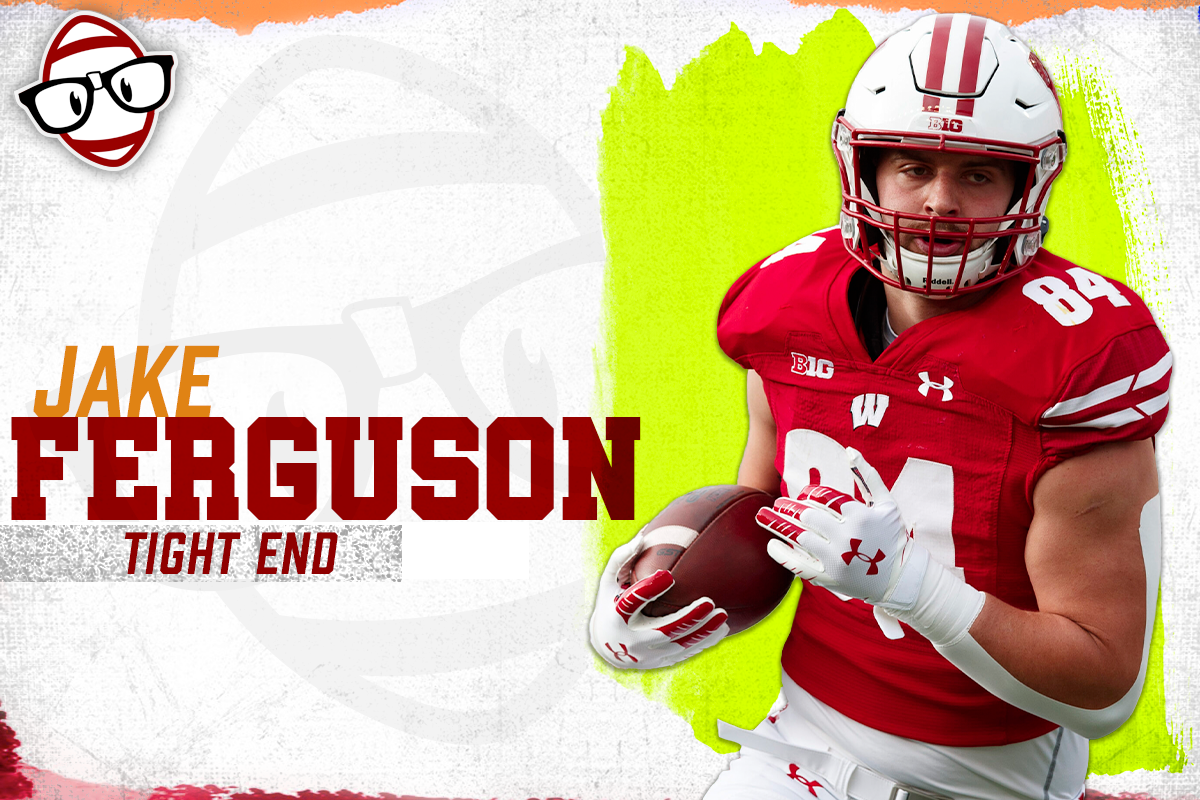 “Simplicity is prerequisite for reliability.”

Welcome, fellow Nerd!  Thanks for tuning in for another profile in our ongoing draft prep series.  These articles are jam-packed with the scouting goodness that you’ll need to adequately prepare for your upcoming rookie draft(s).

Today, we look at Jake Ferguson, a dependably stout tight end hailing from the University of Wisconsin.  As a four-star recruit, the Madison native did not stray far to join the hometown Badgers.  The grandson of Wisconsin coaching legend Barry Alvarez, Ferguson seemed destined to wear the red and white.  Ferguson enjoyed great success over a four-year collegiate career, amassing 1,618 yards receiving and 13 touchdowns.

But, can the towering pride of America’s Dairyland make a triumphant transition to the NFL?  And, what sort of value does he pose to the dynasty-minded?  Let’s dive in; the answers to these questions and more lie ahead!

Ferguson is the definition of a quarterback’s security blanket.  Firstly, his impressive size makes him a prominent target.  And, for a player of such physical significance, he is deceptively crafty at finding zone gaps in short to intermediate coverage.  With reliable hands safely lurking nearby, Ferguson puts any quarterback at ease.

The red zone only accentuates Ferguson’s attributes in this regard.  He consistently uses his size advantage to win on contested catches in the end zone.  Excellent at high-pointing the ball, Ferguson is particularly difficult to defend on a short field.

As an example of this trait, consider the clip below in which Ferguson hauls in an intentionally high pass in the shadow of the goalposts.  Though there are multiple defenders in the area, they would be hard-pressed to stop Ferguson, who deftly elevates for the high altitude grab.

Listen, I get it.  This is a fantasy profile and not a clinic on fundamentals.  But the fact of the matter is that coaches value TEs who can hold their own in the blocking scheme.  And Ferguson doesn’t just maintain his own.  He relishes every opportunity to get physical with a defender.

Blessed with a nasty streak, Ferguson offers great utility as both a run blocker and a pass protector.  He may not win every assignment, but it’s never for lack of trying.  He engages his target and makes them think twice about stepping back into his office.

Take a look at the clip below.  Ferguson is matched up with a linebacker playing tight at the line of scrimmage, anticipating a run.  The bullish TE bursts off the line at the snap and immediately locks horns with his foe.  Ferguson muscles his counterpart a good five yards downfield with fierce grit and eliminates him as a potential tackler.  As the play wraps up, you may even notice a certain pep to his step.

Ferguson takes pride in the craft of blocking.  This will appeal to a pro staff and will undoubtedly earn him valuable playing time.  And when it comes to fantasy, the opportunity is essential to output.

What Should Concern You?

We’ve established that Ferguson’s stature and work ethic more than fit the part.  Sadly, he is limited by middling measurables.  With a Relative Athletic Score of 6.74, he ranks just 326 among 998 TEs evaluated since 1987.  Only two tight ends at the 2022 NFL Combine registered a 40 time slower than Ferguson’s plodding 4.81 seconds.

Ferguson is primarily utilized in short to intermediate routes on film, presumably because he lacks the speed to be a viable deep threat.  Cognizant of his athletic constraints, Ferguson has embraced (and perfected) his role as a blocking and short-yardage weapon with red-zone upside.  He will need to be paired with a coaching staff who can appreciate his best attributes and put him in a position to execute them.

With the offseason announcement of his retirement, the sun has now set on a remarkable career for Indianapolis TE Jack Doyle.  Lacking in athletic accolades, Doyle was a Combine snub in 2013 and went undrafted before ultimately signing on with the Colts as a free agent.  Armed with sure hands, toughness, and ample determination, Doyle would defy the odds in making that roster and becoming a fixture.  As a two-time Pro Bowler, the once unheralded Doyle has charted the course for the eerily similar Jake Ferguson.

Much like Ferguson, Doyle took pride in his blocking technique.  In 2021, at the age of 31, PFF assigned a grade of 75.0 to Doyle’s run blocking, the fourth-best in the NFL.  He played a significant part in teammate Jonathan Taylor claiming the rushing title, and this type of utility resonates with coaches.

Additionally, Doyle, in his prime, was a dominant red-zone threat.  Taking advantage of size and an ability to work a zone, Doyle brought comfort to his QBs and racked up touchdowns in the process.  The clip below is a classic example of this trait.

Now compare this footage to the clip below of a Ferguson touchdown against Big 10 foe, Nebraska.  The full-extension in traffic bears an uncanny resemblance to the Doyle play above and provides a tantalizing peek at Ferguson’s potential at the next level.

There is undeniably a role for Ferguson at the next level with sure hands and a knack for finding space.  His unique blend of traits will put a QB at ease and endear the young TE to a coaching staff.  Unfortunately, Ferguson’s ceiling is capped by limited athleticism.  The NFL will need to accept him for what he is and put him in a position to accentuate what he does best.

Given his limitations, I expect Ferguson to be a late-round selection in the NFL Draft.  To be specific, being picked any time after Round 4 seems appropriate.  However, keep in mind that his closest comparison, Jack Doyle, went undrafted entirely.

With Day 3 draft capital (or later), Ferguson is not likely to be in high demand in your rookie draft.  He will likely be available in the fifth round and beyond.  Please pay close attention to his landing spot and react accordingly.  Ferguson could be a sneaky pick-up if he finds himself on a team with a talented staff and a pathway to relevant snaps.  Even if his connection in the NFL is less than ideal, consider stashing Ferguson as an end-of-roster, free-agent pickup after your rookie draft has concluded.  You could do much worse with that fringe roster spot, given his potential as a red-zone asset.

Evaluating a prospect like Ferguson requires long-term vision and an eye for potential.  He is not likely to burst on the scene with gaudy numbers as a rookie.  However, it is possible to envision the player he can become with great size, storied pedigree, and a tremendous work ethic.  Invest now, while the cost is nominal, and cash in on his enormous potential in the long run.

I thoroughly enjoyed bringing you this piece, and would love to continue the conversation on Jake Ferguson.  Please feel free to comment below or contact me @Spydes78 on Twitter.  And also, stay tuned to @DynastyNerds for a steady pipeline of content from our eminently qualified staff to carry you through your offseason.  If you like what you read, please consider becoming a subscriber to any of the elite tools that Dynasty Nerds has to offer.  Make sure to use the promo code “SPYDES” to receive a 15% discount.  Thanks for reading, and enjoy the grind!