With the #NFLDraft just days away, WR Jalen Tolbert is rapidly climbing draft boards. In our latest 2022 Rookie Profile, @Spydes78 gives you a comprehensive breakdown of this wideout with serious sleeper potential. Jump in now and get a leg up on the competition! 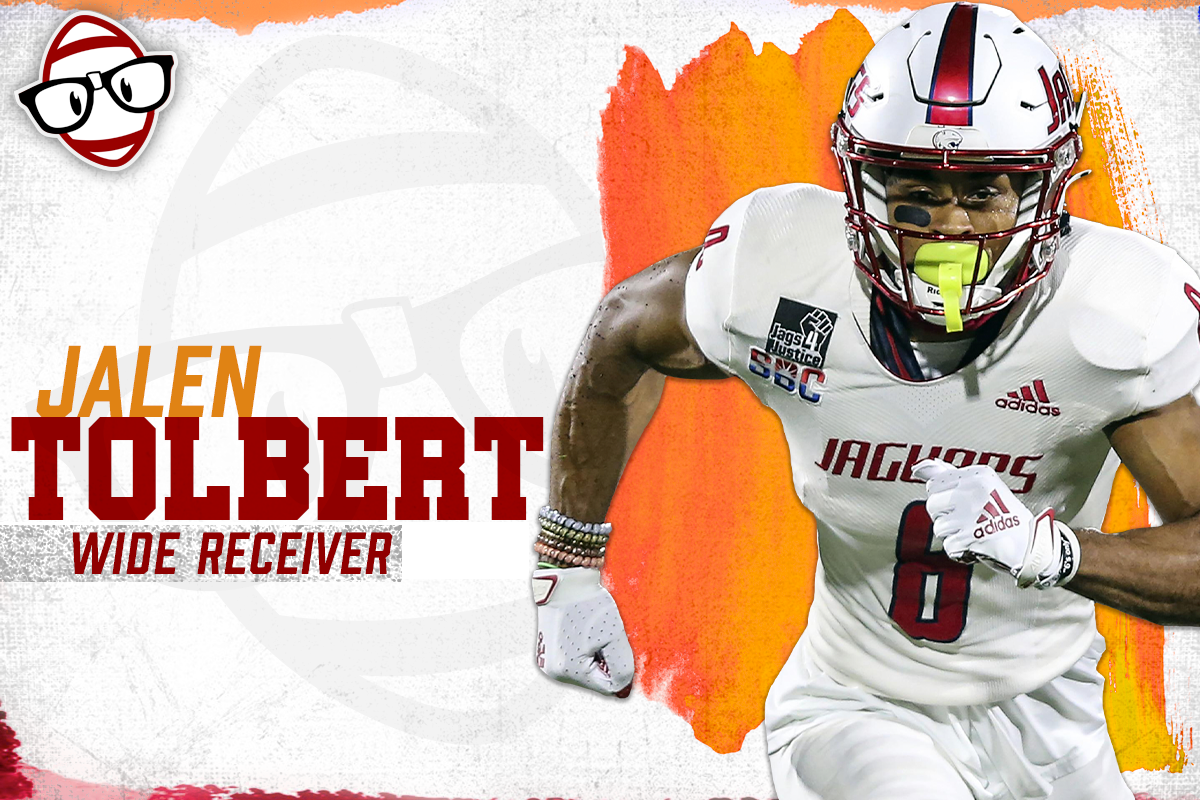 Welcome, fellow Nerd!  Thanks for tuning in for another profile in our ongoing draft prep series.  These articles are jam-packed with the scouting goodness you’ll need to prepare for your upcoming rookie draft(s) adequately.

Today, we’ll explore an underappreciated receiver with the potential to transform from a small school secret to a big-time baller.  The pride of the University of South Alabama, Jalen Tolbert, leaves Mobile as the school’s seasonal record holder for receptions (82), receiving yards (1,474), and touchdowns (8).

And, despite being named the 2021 Sun Belt Conference Offensive Player of the Year, Tolbert’s lack of Power Five credentials was initially the source of some skepticism among draft evaluators.  He quickly shed doubts about his level of competition at the Senior Bowl.  Tolbert boosted his draft stock by shining amongst all-star level talent with considerable swagger and the skills to back it up.

So what is it about Tolbert that’s been turning heads throughout the draft process?  And, what sort of value can he bring to your dynasty squad?  Well, the answers to these questions and much more lie ahead!

Some small school prospects can be a bit of a work in progress regarding strength and conditioning.  Tolbert does not require any such seasoning.  On the contrary, he brings an impressive physique that will bolster his chances for immediate professional contributions.  With a Relative Athletic Score of 8.55, Tolbert ranks a lofty 380 out of 2,613 Combine-ready wide receivers evaluated since 1987, a top 15% mark.

Tolbert’s trademark combination of power, speed, and flexibility makes him naturally prone to success as a YAC monster.  He can shed tacklers or outrun them with equal dexterity, making him particularly dangerous in the open field.  Tolbert’s catch radius is also particularly accommodating to less than accurate ball placement, a trait endearing to most any quarterback.

Consider the clip below in which Tolbert fends off the defender on a short crossing route.  He looks the ball in and then flashes his agility in breaking back to the sideline.  With space created, he ultimately wins the track meet by outrunning the entire Tennessee defense en route to a touchdown.

It is precisely this type of athleticism that sets Tolbert apart from the competition.

The conventional stereotype for a deep ball receiver is that they are undersized, speedy, and one-dimensional. Tolbert is once again an exception to the rule.

At 6’1” and 194 pounds, he is certainly not diminutive.  And though his film shows excellent acceleration and burst, his 4.49s 40-yard dash time does not portend afterburner type speed.  Yet, Tolbert consistently finds himself as the victor on deep patterns.  So how does he do it?

First and foremost, Tolbert is excellent at tracking the long ball.  He is capable of adjusting his speed and contorting his body. He invariably times his route with precision body placement.  Couple that ability with Tolbert’s keen footwork and sideline awareness, and you have a deep threat with outrageous functionality.

The clip provided below is an excellent depiction of this trait.  Tolbert explodes off the line, initiating a foot race with the defender.  The lofted ball is underthrown, but Tolbert keeps the defender unaware, distracting him by building speed with his long, powerful gait.  At the last second, he pulls up and collects the reception, mindful of his positioning along the sideline.

Tolbert’s deep ball skills leave this poor corner a negligible chance at success on this route.  And this is merely one example of a much larger trend.

What Should Concern You?

With all that Tolbert has got going for him, his film can also be maddening to watch.  He will make an acrobatic, over-the-shoulder grab and immediately follow it up by dropping a simple well-timed slant pass.  Even more perplexing, the struggles commonly occur in high traffic situations.  You’d expect him to be a contested-catch dynamo as a receiver with above-average athletic traits.  These difficulties can only be attributed to periodic lapses in focus.  Though not insurmountable, these concentration issues will need to be cleaned up to become a reliable contributor at the next level.

Tolbert elevates his resolve when he has the potential to be directly involved in a play.  The problem with this mentality is that his effort can and does telegraph intent to a savvy defensive back.  Though Tolbert is blessed with a tremendous burst, this attribute is also a curse when not deployed evenly.

As a blocker, Tolbert has the physicality to move bodies.  However, he lacks tenacity with his assignments and is often willing to shepherd the defender with body positioning rather than put hands on him and engage.  The NFL will surely call on Tolbert to play with more aggression and consistency.

Mike Wallace may represent a bit of an unknown for those of you relatively new to the fantasy game.  A standout receiver, he played for five different organizations across an impressive ten-year professional career.  Drafted by the Steelers in the third round of the 2009 NFL Draft, Wallace made his mark with scouts through a combination of athleticism and a penchant for the big play.  Sound familiar?

At 6’0” and 199 pounds, Wallace’s official measurables were within an inch and five pounds, respectively, of Jalen Tolbert’s marks. However, Wallace enjoyed a slight advantage in speed and vertical, Tolbert’s ten-inch mitts and expansive wingspan even the comparison.

The correlation between players comes alive when you examine their deep ball attributes. Wallace had exquisite talent as a ball tracker.  And I recognized those same talents when I watched the film of Tolbert.

Consider the clips below.  The first vintage footage illustrates a 50-yard bomb lofted downfield to a sprinting Wallace.  Though Roethlisberger’s pass is a bit off target, Wallace adroitly meters his route to intersect the ball’s path with precision accuracy.

Now compare the corresponding 2021 clip of Tolbert.  Note how he makes an exceptional in-air adjustment on the ball, taking advantage of a back-turned hapless defender.  These plays are eerily similar examples of remarkable timing, a coveted trait that is rarer than you may suspect.  The ability to mimic such a prolific deep ball tracker bodes well for the future of Tolbert.

With top-notch athletic traits and an ability to stretch defensive schemes, Tolbert is a small school prospect with big-time ability.  And though haunted by occasional lapses in focus or effort, I have confidence that good coaching can correct these flaws.

In a class deep with headlining talent at the receiver position, Tolbert’s draft position may be slightly depressed.  I have consistently seen him tabbed with a third-round grade, which is a fair assessment.  However, do not let those who may come before him influence your resolve on Tolbert.

If Tolbert is indeed selected with Day 2 draft capital, it will indicate that the NFL has recognized the abilities mentioned above laid out in this profile.  And, here’s the fun part.  While Burks, Wilson, and friends are getting snatched up in the first round of your rookie draft, Tolbert will wait patiently for you to collect.  It is not unreasonable to see him available as late as the fifth round, depending on the format!  (Though if you want to be safe, it may be best to snag him in the fourth.)

Netting a player with big-play aptitude in the late rounds is the name of the game in dynasty.  Take a chance on the outrageous potential of Tolbert, and show your league mates that you too can ‘go deep’ with the best of them.

I thoroughly enjoyed bringing you this piece, and would love to continue the conversation on Jalen Tolbert.  Please feel free to comment below or contact me @Spydes78 on Twitter.  And also, stay tuned to @DynastyNerds for a steady pipeline of content from our eminently qualified staff to carry you through your offseason.  If you like what you read, please consider becoming a subscriber to any of the elite tools that Dynasty Nerds has to offer.  Use the promo code “SPYDES” to receive a 15% discount.  Thanks for reading, and enjoy the grind!