Jalen Wydermyer isn’t a house hold name yet. But he’s a big tight end, and he can make some plays in the passing game. 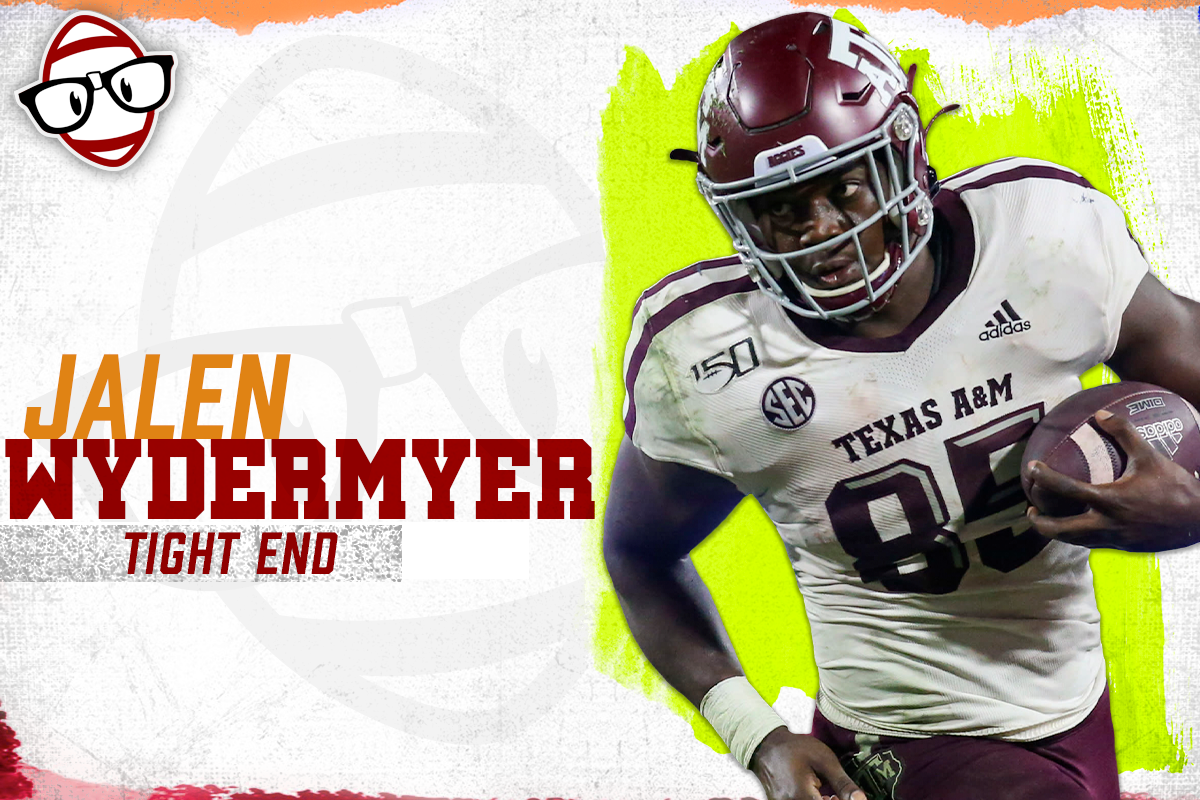 Jalen Wydermyer likely won’t rise to the level of becoming one of the premier tight ends in the NFL. However, he can be a consistent, reliable target for a quarterback in the middle of the field and especially the red zone. He is a big, physical presence at TE. Wydermyer may even be able to contribute right away as a rookie.

Wydermyer graduated from Dickinson High School in Dickinson, Texas. He was a highly sought-after recruit coming out of high school, with Texas A&M, Alabama, Florida, and more interested. Playing in an offense with the dynamic Isaiah Spiller the last three seasons opened some opportunities in the passing game. Wydermyer is also a more than capable blocker when called upon to inline-block. His rookie season was his best strictly as far as his yards per catch average.

However, he hauled in more receptions during his sophomore and junior season. Wydermyer’s yards per catch slipped just a little during his sophomore season, but his receiving yards went up even though he played two fewer games. Texas A&M will undoubtedly miss his big presence in the red zone.

Blocking – Wydermyer gets after it blocking in the running game. It may be strange to highlight that aspect of a TE’s game. But, as Wydermyer isn’t going to be making a lot of plays down the field, the more he can do for his team, the more he’ll be on the field.

Wydermyer’s technique will need to improve a bit, as he tends to get his hands outside the defender’s frame, which will get flagged by NFL officials as holding. He showed good recognition stepping over to assist the center with the rusher on the play. The attitude he shows will endear him to his offensive coordinator.

Pass Receiver – Wydermyer is a better blocker than a receiver at this stage of his career. His route running is going to need some refinement. He showed his potential on this play, extending for the football as it wasn’t the best pass from the quarterback. That’s going to happen, though, and you have to make the play.

Wydermyer will be valuable in red zone packages and not just his height but also his ability to get open, sit down, and turn upfield.

Speed – Wydermyer doesn’t have that extra gear to rip off big gains down the field consistently. His lack of speed will likely limit him to being a TE2 at the next level.

Strength – He has to get stronger; when he’s blocking, he’s spending far too much time on the ground. Wydermyer has to do a better job of staying on his feet and driving through the defender.

Focus – Wydermyer seems to lose focus on the field, and at times when the play breaks down, he doesn’t seem to be working his way back to the quarterback to get open.

Wydermyer has a Day 2 grade for me, and I feel very comfortable with thinking an NFL team looking to run two tight end sets will draft him between rounds 3 – 5. The NFL combine is going to be huge for him. He could cement himself as a third-round pick or could see his draft stock take a tumble. Wydermyer also will have to show out at his pro day as well. He may not even be drafted in your dynasty league rookie draft, but make sure to file his name away. The TE landscape in fantasy football is butt ugly. You have to file away as many names as possible, as you never know when an injury may strike, and you need to make a waiver claim.

However, by his second year in the NFL, there could be something there with Wydermyer. He could be a fantasy asset eventually, and you might be glad that you got in on the ground floor. Besides, TEs typically take several seasons to blossom. And Wydermyer is a raw prospect, but one with some potential if the right coach and QB can draw it out of him.