A lot of talk with this running back class but a name not getting mentioned enough is James Cook of Georgia, that may be changing soon. 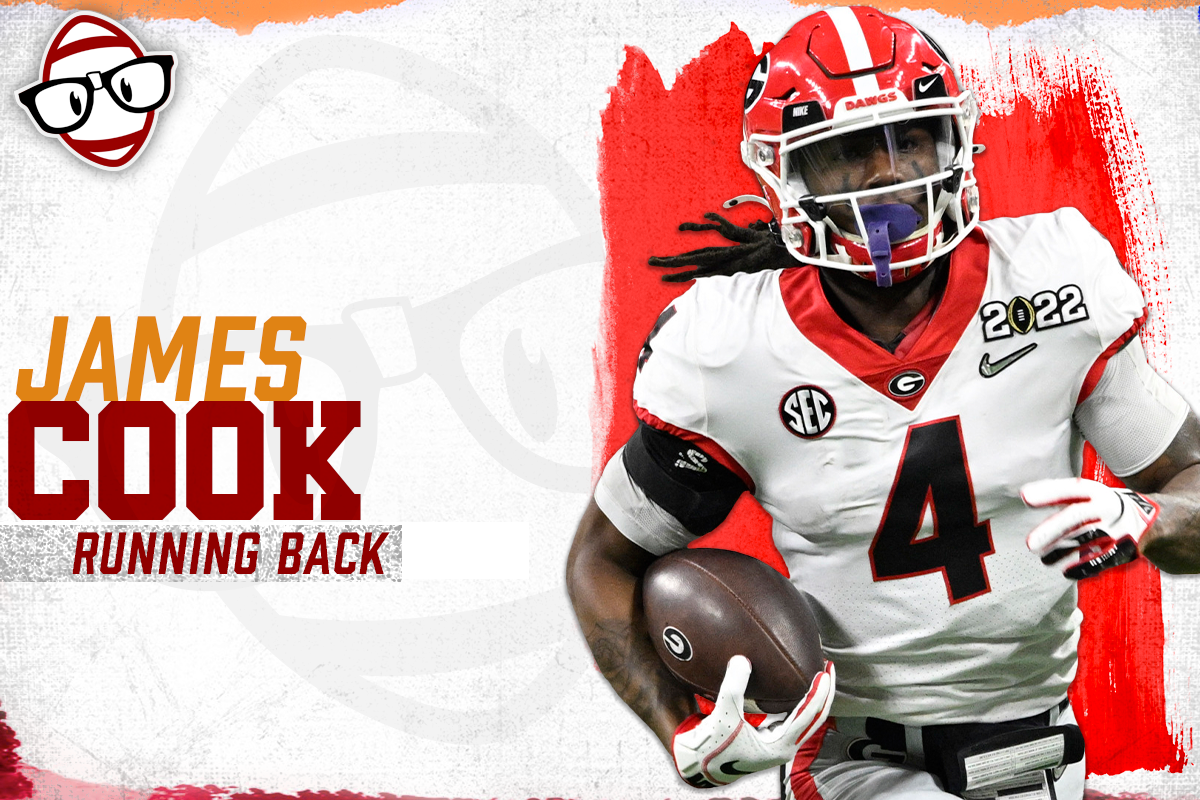 The Georgia Bulldogs have produced many talents at the running back position over the last couple of years. Names like Sony Michel, Nick Chubb, Todd Gurley, and D’Andre Swift will have a new name joining them in James Cook.

Cook has been on the Georgia team for what seems like forever, just waiting patiently, and this year when he got his chance, he did not disappoint. He proved to be one of the best dual-threat running backs in the country, has already caught the eyes of the NFL, and has earned a Senior Bowl invite.

We have seven games available in our Film Room for you to check out the Georgia back. Time to get to know Mr. James Cook.

Cook comes from the talented region of South Florida, specifically Miami. He attended Miami Northwestern, which was the rival high school of his brother Dalvin Cook, and there he was able to earn a four-star recruiting rating from 247 sports and was named an Army All-American. He was recruited by all the big schools in the country, especially in the southeast part of the country, but ultimately he chose to head to the running back factory that is Georgia.

Cook played in an impressive 46 games for the Bulldogs and was used in some capacity in all four years he played at Georgia. His three-year average was 39 carries for 258 yards rushing while also chipping in some receiving stats as well. He had a knack for the end zone, even in his limited role to score nine times.

All of this would lead up to his big senior year for both him and the team as a whole. During the Dawgs national title run, Cook would have his best year statistically with 140 touches, 1,012 total yards, and 11 touchdowns. He was a significant part of the team’s success in the national title game giving Stetson Bennet someone to lean on in crucial moments to make plays and extend drives.

All these things we have seen thus far will be why he will be successful back in the NFL and one of the top-end rookies in drafts this summer.

One of the things we all look for in the fantasy community is a PPR monster at the running back position, James Cook in the right system could be that for you. He was used in the Sony Michel role to Zamir White’s Nick Chubb role in this Georgia offense, but Cook can be what everyone wanted Michel to be.

Cook had demonstrated such elite receiving ability as a running back that when Georgia was down so many receivers, they used him out at WR. He can take the top off a defense and score anytime he touches the ball, and his hands and receiving technique are so clean that any coaching staff will be in love from day one. Please give me all the James Cook shares in your rookie drafts for this trait alone, and no rookie compares here.

Another of Cook’s abilities that will have NFL teams falling for him is his vision. The patience he shows is almost vintage Le’Veon Bell-like in a sense he can wait for a lane to appear before overcommitting and getting no gain. The last prospect I saw with something like this was J.K. Dobbins, and before his injury this year, he was still showing this trait, and it has helped him find success early on in his NFL career. I see no reason why this can’t do the same for James Cook in any system he lands in.

The only thing that stuck out to me when I watched his tape was that defenders could overpower him at times. When he ran between the tackles, he could sometimes get knocked around by the arm tackles or linebackers coming in, which resulted in not much gain. When he is out receiving, he can also have a hard time out in space when taking on a defender physically rather than trying to use his elusiveness. To be honest, though, this was something we could see get better as his college career went on. I imagine that it becomes even less of a problem with an NFL workout system and coaching.

To be honest, expectations should be high for James Cook, but for whatever reason, they aren’t. Several people in the draft community have already said he is undervalued, and some even have him as the top running back in this class. I don’t think that is off base. By the time the combine rolls around and pro days, he should have worked his way into that conversation. Please take advantage of his stock until then, but he may be RB1 in rookie drafts with the right landing spot like Miami, Houston, and Atlanta.

Get ready for your rookie draft with the DynastyGM!! Rankins, trade calculator, league analyzer, and much more. Just $4.99/month or better yet, bundle with the Nerd Herd for just $6.99/month, and get extra podcasts, the Dynasty Prospect Film Room, and more.