@DanT_NFL takes a deep dive into Jerome Ford. We analyze some tape and look at the stats to figure out why this may be the best second round pick in your dynasty rookie draft. 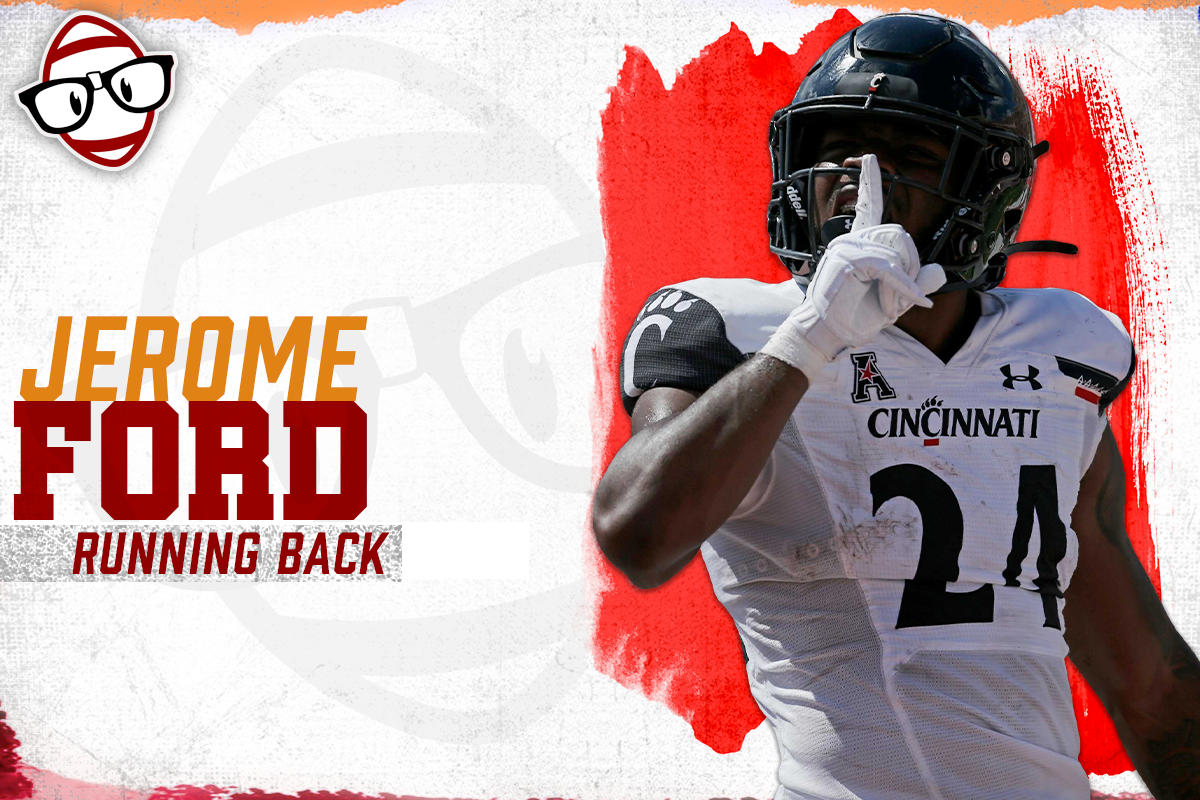 With the advent of the transfer portal, we are starting to see many talented players breaking out late after spending their freshman and/or sophomore season buried behind other young talents. Examples of this include Joe Burrow, Alvin Kamara, and Justin Fields.

Could Jerome Ford be the next? He spent the early part of his college career in an Alabama running back room that included: Josh Jacobs, Damien Harris, Najee Harris, and Brian Robinson Jr. Was he not able to win the job due to lack of talent or was he just not the next man up? Let’s take a deep dive and figure out if Jerome Ford may be one of the sleeper running backs in this 2022 class.

Ford was a 4-star recruit coming out of Armwood High School in Tampa, Florida. He had 22 Division One offers during the recruiting process, but only visited Alabama. It was clear he had a vision of where he wanted to play college ball. Unfortunately, he found himself stuck in the middle of a very talented Alabama running back room. This is a situation that has affected many college running backs in the past. Alvin Kamara, for example, was stuck in a room with Derrick Henry, Kenyan Drake, and T.J. Yeldon. Kamara is a very talented player who has gone on to have a very successful NFL career. Could we see a similar path for Jerome Ford?

Ford transferred to Cincinnati prior to the 2020 COVID season. There he shared the backfield with Gerrid Doaks, who would eventually be drafted in the 7th round of the 2021 draft by the Miami Dolphins. Doaks was the lead back and had twice as many carries as Ford did that year.

2021 would see Ford take over the starting position and have the backfield all to himself, outside of Desmond Rider.. As the primary back, Jerome Ford was able to put up over 1500 all-purpose yards as Cincinnati fought its way to a college football playoff appearance. They ultimately lost to Alabama, but Ford was a vital part of this offense all season long.

Let us take a look at what skills Ford has to make him such a focal point of an offense.

Something that immediately pops off on tape is Jerome Ford’s contact balance ability. There are many cases where we see multiple defenders needed to take this man down. A simple arm tackle is not enough to stop Ford. He is easily able to shed arm tackles and continue on for 5 plus yards downfield

As we can see in this first clip, Ford is actually touched by three separate defenders. None of them are able to get a strong tackle on him. He even uses a stiff arm to shed the second defender. This ability at the goal line is invaluable at the NFL level and something teams will love to see. Jerome Ford would find the endzone twice in this game despite only compiling 66 rushing yards.

This is another great clip against Tulsa during the 2021 season. Here we can see Ford is touched by at least three defenders but continues to keep his legs moving as he sheds tackles. You love to see that he continues to keep his eyes upfield as he plans his next move in the middle of taking a hit.

I had to include this clip from his game against the University of Central Florida here. It is an impressive display of the balance and conservation of momentum that Ford has. If you are looking for some tape to watch I highly recommend this game. Jerome Ford was able to rush 20 times for 189 yards and 4 touchdowns. As well as 2 receptions for 67 yards. You can see every part of his game on display.

A common trait that the draft community brings up when talking about running back prospects is vision. That is the ability of a running back to see how the play is set up and the best path available to take them to the next level. Ford has excellent vision for a running back and there are many clips to prove this.

Another trait that goes hand in hand with vision is patience. That is allowing your line the time to set up blocks and taking holes that might not immediately be available. There is a lot going on in this clip so let’s try to break it down. This is a classic outside zone run with some pulling guard action. Here you can see Ford has the patience to let his pulling guard get out front to set the edge. He also has the vision to see that the defenders are overcommitting to the edge and the cut-back lane is wide open.

We see another example of this on the very same drive just a few plays later. In this play, he actually uses his quick hips to set up a defender on the second level to get blocked. The play has him attacking the “B” gap to the left side of his left guard. His center quickly sheds his initial block and extends to the second level. This is where the magic happens. Ford acts like he is going to continue along the same path luring the linebacker to attack that side of the field. At the last second, Ford flips his hips and allows his center to seal off the linebacker. The play wasn’t a big one, but it easily could have been.

These topics aren’t things that need to be covered in film, but are worth mentioning. Jerome Ford was able to play out his entire college career without a major injury. This is a big plus heading into the draft process. A running back with a clean injury history is a major plus to both the NFL and our very own dynasty teams. On top of that Ford was able to finish college without giving up a single fumble. That is not to say that ball security cannot be improved, but it is a great start.

Pass catching is not something that we can call a weakness in Ford’s game, but is something that may be concerning. When studying his 2021 Bearcat tape, it was immediately obvious that his route tree was extremely limited- limited to one route to be more specific. Now is this a product of the offense they ran in Cincinnati or is this more to do with Ford’s skillset? In Ford’s defense, he does look good when catching passes. In this clip from the College Football Playoff against Alabama we can see the one route he was asked to run. He does catch the ball with his hands and secures it before turning his head upfield. Which are the fundamentals we want to see out of our pass-catching running backs.

An often overlooked aspect of a running back prospect is pass protection. It is one of the harder things to pick up on when transitioning from college to the NFL. It is also extremely important as teams do not want to risk their quarterbacks with rookie running backs who can pass protect. Jerome Ford definitely shows the effort in pass protection. When watching his tape there are many cases where he puts his full body into the effort of stopping a pass rusher.

However, there are also many cases when he reads the defense poorly and chooses the wrong gap to block. This is something that his NFL team will work with him on over his rookie training camp. More importantly, he shows effort and I am sure he will be a quick learner once football is the only job he has to worry about.

I currently have Jerome Ford inside my top ten running backs for this 2022 rookie draft class. I like to organize my players in tiers prior to the NFL draft and Ford falls in my tier three with other players like Kevin Harris, James Cook, and Tyler Goodson. Draft capital will determine where within this tier he will be and I can have Ford anywhere as high as RB6 given the correct draft capital and landing spot.

The draft will be huge for Ford, just like any other running back. We can hope that we will see him get day two draft capital, but the NFL seems to be shifting its value on the running back position. Day two draft capital and a good landing spot would see his value rise. Anything after the fifth round and we have some reason for concern.

In my opinion, the best landing spot for Ford will be somewhere where he can sit and learn for a year. Think of situations similar to Tony Pollard, Alexander Mattison, and AJ Dillon. Initially, these guys were brought in as the backup, but now the talent is really shining through. A place I would love to see him is with the New York Giants. A Giants team that is currently trying to rebuild is not likely to re-sign Saquon Barkley to the contract he will be looking for. That would give Ford a year to learn under Barkley and take over the job in 2023.

Given some polish, he has the ability to be a three-down back at the NFL level. The areas of concern are teachable and most importantly the athletic profile is unquestionable. If Jerome Ford is there at the late second of your dynasty rookie draft, he should be a no-brainer pick.