Next up in our rookie profile series @ReflipeWThenuz dives into the film on Ole Miss RB Jerrion Ealy to determine his skill set and his NFL fit. 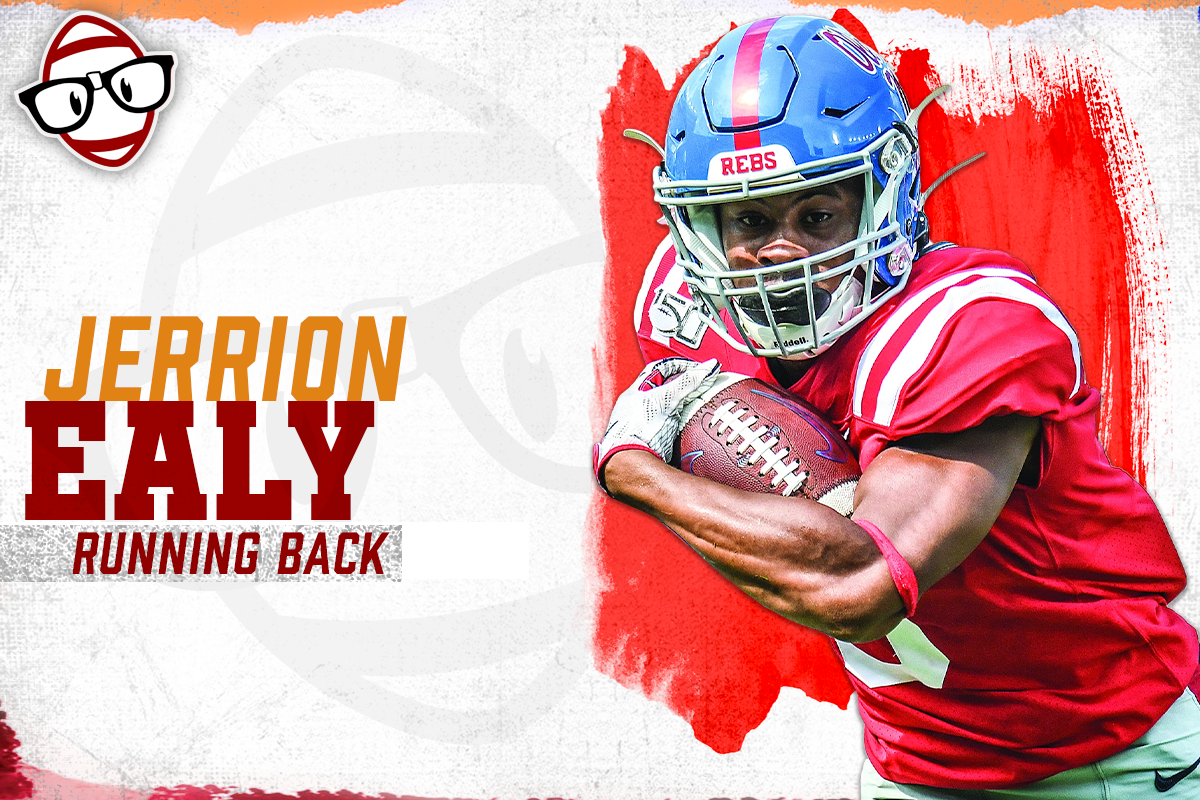 There are three different types of running backs. Type A RBs are two down thumpers equipped to batter defenses yet have very little to do with the passing game. Type B operates on third downs and obvious passing situations and are essentially specialists. Type C are the unicorns that can play all three downs and never have to come off the football field.

Ole Miss Junior RB Jerrion Ealy firmly falls within the Type B class of players. The diminutive dynamo has been an offensive weapon during his time at Oxford. This two-sport star shined as a football and baseball player in the SEC. He was an Under Armour All-American in both sports during his time in college, a trait shared by only a handful of athletes, Kyler Murray and AJ Brown, to name a few.  Coming into the NFL, the former Rebels star presents an interesting prospect that could provide some value to your PPR lineups. Without further ado, let us take a look at Jerrion Ealy.

Jerrion Ealy came to Ole Miss as a 5-star recruit, according to 247sports. In fact, he was the no. 3 RB recruit in the entire nation coming out of high school. Ealy was a fairly big commit for his home state University to secure following his career at Jackson Prep in Fleetwood, Mississippi. Ealy chose Ole Miss over some heavy hitters, including Clemson, Alabama, Auburn, and Mississippi State.

Despite missing most of his senior season, Ealy left behind some impressive numbers at his High School, including a Junior season for the ages where he rushed for 1,743 yards and 32 TDs to go along with 25/578/8 receiving.  You can see his Junior Highlight Film below.

Ealy made an immediate impact upon arriving at Ole Miss. The true freshman played in every game and racked up nearly 900 total yards while averaging 6.9 ypc in the most talented conference in the nation. Ealy was a valuable part of the Rebel offense from that point on. Although he never broke the 1,000-yard rushing mark, he was remarkably consistent in making plays year after year in the SEC. You can see his slow and steady progression statistically below.

The first thing that stands out when watching the film on Ealy is that he is a fast player. While he sometimes runs a little too upright for my taste, he runs with speed both inside and outside in the read-option. You can see evidence of his 4.52 speed all over his tape.

Below is another example of Ealy being used in the passing game. You can see him with the pretty one-handed snag out of the backfield. He even manages to finish this play with a little bit of power.

While he will never be confused as a three-down RB at the next level, he does run with excellent balance. On the play below, you can even see him employ a stiff arm to help get to the outside before cutting it back upfield to maximize his yards.

From time to time, he also displays decent contact balance. Watch in the play below how he bounces off defenders and keeps his balance while churning his feet, fighting for more yards after planting that left foot and getting upfield.

One of my more significant concerns for Ealy is his struggles in pass blocking. For a play of his stature, third downs will be crucial to his offensive viability. However, I found his efforts in this department lacking sometimes. In the clip below, you can see him step up into the pocket and misread the blitzing defender, never coming close to helping his QB.

At times, his slight frame can also cause him to be swallowed up by defenders, making it difficult to trust him on early downs at the next level.

When I watch Ealy, the player that comes to mind is Dexter McCluster. A player whose athleticism was perfect for the college game yet struggles when forced to step up in competition. Both players were a bit undersized and tested worse than their lofty recruiting and college production profile indicated.

When I watch film on college prospects, I try to be as optimistic as possible about their prospects at the next level. When digging into Ealy’s tape, there are certainly some nice traits he will bring to an NFL team.

However, I am not certain he will ever be a relevant fantasy/dynasty asset outside of kick return yardage leagues. His deficiencies in the pass blocking game will severely limit his chances of getting onto an NFL field for any meaningful snaps. Ealy has some excellent skills with the ball in his hands, so I am sure he will make his way onto an NFL roster but most likely as a return specialist. We will see how the NFL views the former high-end prospect on draft day, but I will likely be avoiding the former Ole Miss Rebel for my part.

Thank you for reading this article! Please be sure to join the #Nerdherd, so you don’t miss out on any of the amazing things we have to offer @Dynastynerds.com. Use my promo code DynastyHolliday for a 15% off discount. You will get rankings, extra podcasts, and access to our rookie film room. You can get access to our revolutionary DynastyGM tool for just a couple of bucks more. So much for so little. Why miss out on all the fun? Also, you absolutely must check out our new mock draft tool. Please find it in your Apple & Android app stores. Follow me @ReflipeWThenuz for more dynasty content and other musings.