John Metchie III was in the shadow of Devonta Smith, Jaylen Waddle, and Jameson Williams while at Alabama. But don’t sleep on him in your rookie drafts, Woo Lee tells you why you shouldn’t! 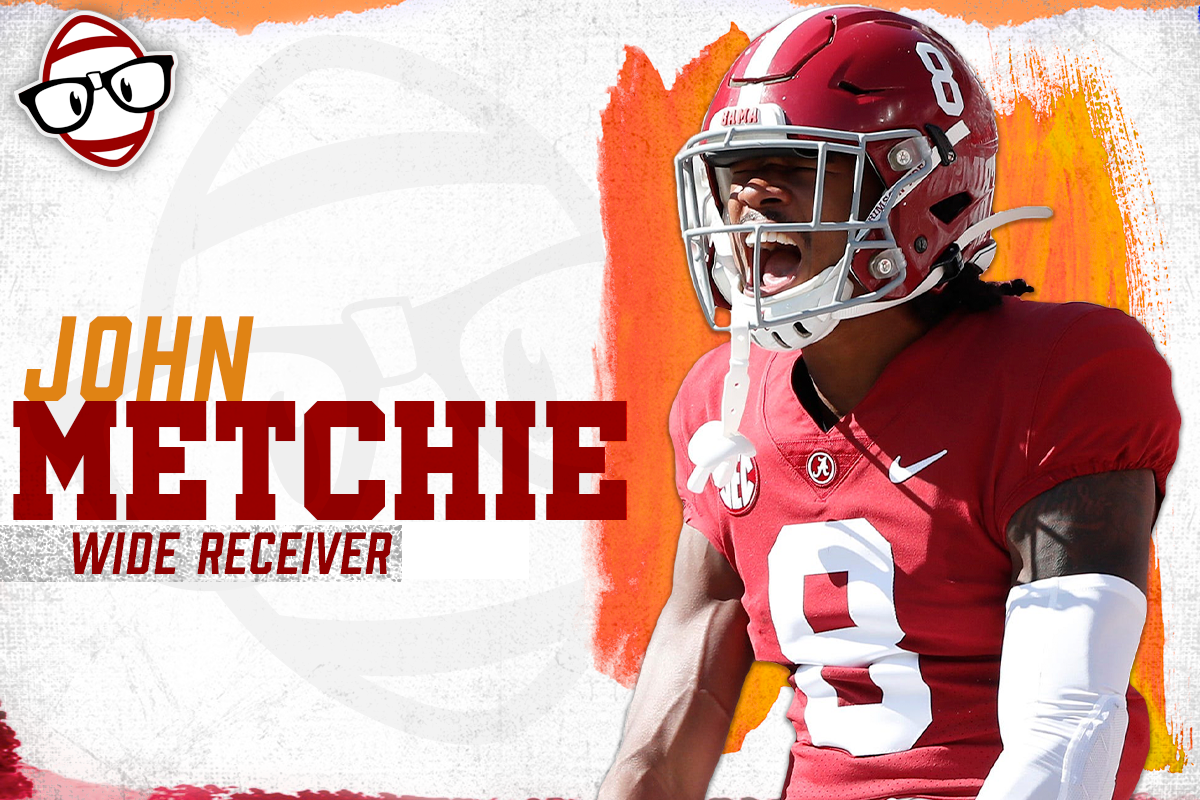 The 2022 draft class is full of talented wide receivers, and one of the forgotten receivers in this draft is Alabama’s John Metchie III. Although he suffered an injury, he should still be regarded as one of the top receivers in this class. @WooLee_FFB will break down why dynasty managers should watch for Metchie in their rookie drafts.

John Metchie III was a 4-start recruit from Hightstown, NJ. He was ranked the 40th receiver in the nation and the sixth-best receiver from NJ. He was recruited heavily, but he decided to commit to the University of Alabama.

He was already given a role in the Alabama offense in his first year. Metchie was not red-shirted as a freshman. He did not have a massive role in the offense, but he made enough of an impression as a freshman to earn a spot in a deep WR core at Alabama. Metchie got a more significant role in the Crimson Tide offense in his sophomore year as star WR Jaylen Waddle was injured. He took advantage of this opportunity as he caught 55 receptions for 916 yards and six touchdowns. Even though Devonta Smith was on his Heisman trophy-winning season, Metchie could still produce. He carved out the role as the #2 receiver for the Crimson Tide.

In Metchie’s junior season, Alabama gained another star receiver in Jameson Williams. Williams made an immediate impact in their first game against the University of Miami in their first game of his junior season. Looking at the receiving yard totals, Williams outproduced Metchie. Williams continued his electric performance and overshadowed Metchie. Looking a little deeper at the statistics, this tells a different story. In the 13th game of the season, Metchie suffered a torn ACL. This effectively ended his season, but he still finished the season with the most receptions on the team.

Taking a closer look at the statistics, Metchie was quietly the lead receiver. In his junior season, he caught 96 receptions on 133 targets. He led all Alabama receivers in receptions and targets. Although Metchie didn’t come close to Williams’ receiving yard totals, Metchie was consistent and reliable. He ran away with the reception totals. Looking deeper at his statistics, his 72% catch rate proves his catchability. He won’t always make the big plays, but he can be counted on making the needed plays.

Looking at Metchie, the first thing noticed is that he’s a great route tactician. He won’t necessarily beat defenders with physicality or overwhelming athleticism, but he can dominate defenders with his route running. He ran a ton of different routes this season. Metchie did a lot of his damage in short to intermediate routes.

Here, Metchie does a great job selling a simple curl. Instead, he runs a pivot route for a considerable gain. This slight movement where Metchie opens up his hips into the defender created that separation. He made the defender make a decision and was able to capitalize.

He was also effective in the intermediate routes. Metchie’s ability to gain separation is seen here again. He gets enough separation to make sure he can get to the ball faster. Here, he runs an out route, and he creates that slight separation that allows him first to the ball. Metchie was excellent at making the right plays. The plays that keep drives alive.

In addition, Metchie’s game revolves around his ability to run after the catch. He used his speed and consistently was able to break off 10-15 yards.

Here, he runs a simple slant and runs it into the end zone. Metchie has good ball tracking skills. He does have a great feel on where the ball will be.

Metchie also does a great job bailing out his QB when the play breaks down. He’s just a guy that knows how to get open and take open space.

Here, he does a great job understanding where the ball will be and creates a momentary separation in such a small frame of time. Metchie leads the defender up so he can come back to the ball.

Here, the play breaks down, and Bryce Young has to roll out and escape the pocket. Metchie does a great job taking up that open space to help his young QB out in what was supposed to be a sack or an incomplete pass.

Metchie has a lot of good qualities, but he doesn’t have excellent quality in terms of his athleticism. He isn’t the fastest, explosive, or a big play type of player. Even when he had the opportunity to be the X receiver, he was quickly outmatched by his former teammate Williams. Metchie doesn’t have the top-end speed compared to other wide receivers in this year’s class.

In addition, another weakness is his inconsistency in catching balls in traffic. Metchie was wildly inconsistent with his catches. Often, it did feel like he was trying to catch the football with his chest more than his hands. As a WR that is projected to have a slot receiver type of role, having any inconsistency with his catching ability can result in him being benched or replaced. Because Metchie doesn’t quite have the speed and athleticism to back up this inconsistency, he has to be amazing in the small details.

Overall, Metchie is a solid slot receiver. He doesn’t make the big plays, but he does an excellent job making the right plays. Metchie is a late Day 2 prospect. He could be a wonderful addition to any NFL team and should have a role on any team he is drafted to. This is a player they should be keeping an eye on for dynasty managers. Metchie could be of fantastic value considering his experience and abilities in the late second round of rookie drafts. Though the early second round may be a bit rich, it wouldn’t be out of the realm of possibilities if he gets good draft capital and is put in a good situation. John Metchie III could be a diamond in the rough in this year’s rookie drafts.