Can Justyn Ross overcome severe injuries and return to the electric player he was during his breakout 2018 season? @JoeBeldner takes an in depth look at the tantalizing incoming rookie WR. 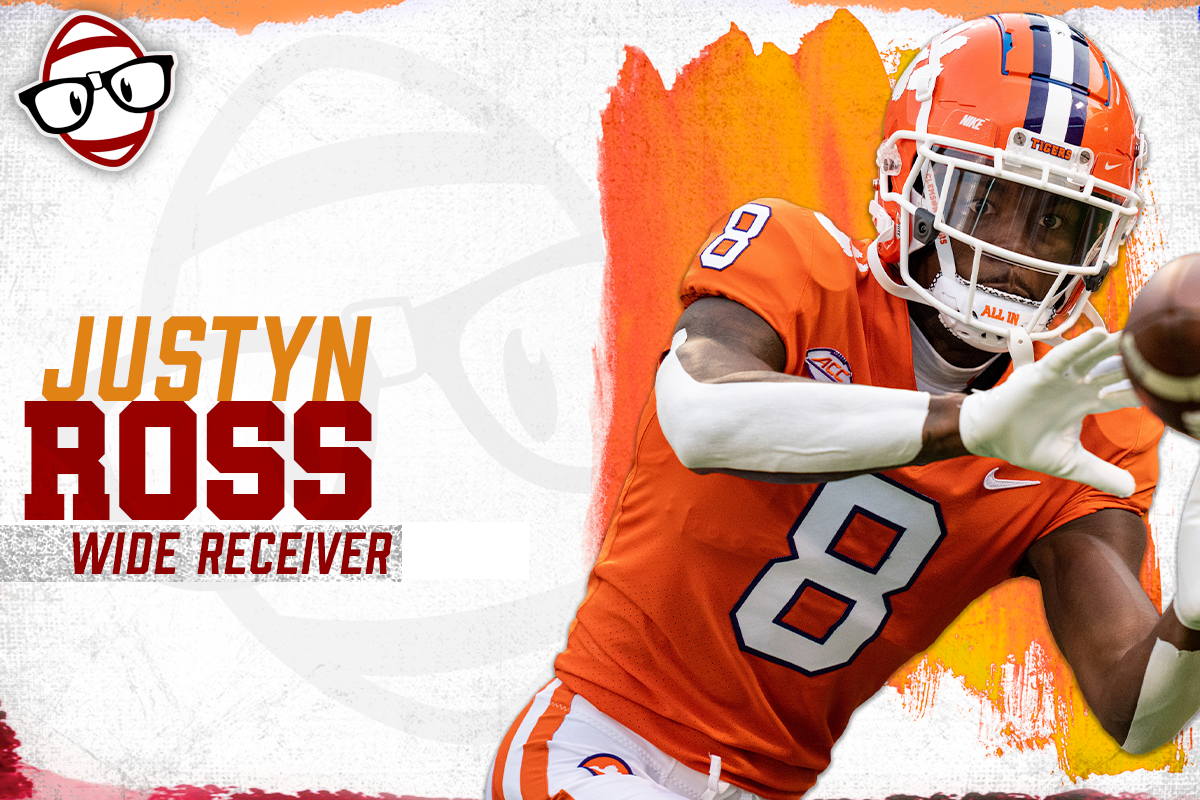 The 2022 NFL draft class is practically overflowing with wide receiver talent. Overshadowed by some of the biggest names of the class is Clemson’s, Justyn Ross. Following an explosive freshman season with the Tigers, Ross has dealt with an array of injuries, which has severely hindered his continued success. Fast forward a few years later, and the intriguing WR has become one of the biggest question marks in this year’s draft class.

Ross was a highly touted WR coming out of Central High School in Phenix City, Alabama. Ross had an eye-catching 37 catches for 730 yards and 13 touchdowns in his senior season. This success on the field made the young pass-catcher one of the most coveted high school players in the country. As the No. 1 player coming out of Alabama, many had him penciled in as the next great WR to lace up for the Crimson Tide. It came as a major surprise when Ross chose to play for the rivaled Clemson Tigers over his hometown team. Heading into his first collegiate season in “Death Valley,” Ross was a lanky WR, oozing with potential and a great opportunity in front of him.

Lights, camera, action! Ross exploded into the national spotlight in his freshman season with the Clemson Tigers. In Clemson’s season opener, he made an immediate impact for his new team, scoring an impressive touchdown in limited minutes. The freshman phenom erupted for 103 yards in his next game and caught another TD. Ross finished the regular season with 46 receptions for 1,000 yards and nine receiving TDs. Playing alongside some spectacular future-NFL talent in Trevor Lawrence, Tee Higgins, Hunter Renfrow, and Travis Etienne, the freshman from Alabama, helped lead the Tigers to an undefeated season.

Although he had a terrific regular season, Ross proved to be at his best under the brightest lights. Facing Notre Dame in the Goodyear Cotton Bowl Classic – CFP Semifinal, Ross hauled in six catches for a whopping 148 yards and a pair of scores. This explosion of a game had NFL scouts on notice, as the young WR was quickly becoming a household name. Following his best game of the year, the stage was set for an epic showdown in the College Football National Championship Game. For obvious reasons besides this being a monumental game, the Tigers were going up against none other than the University of Alabama. This game proved to be a defining moment in Ross’s young career. In a blowout win, the freshman lit up the Crimson Tide, completing six catches for 153 yards and a key TD. Following this game, Ross was recognized as one of the top young talents in college football.

Measuring in at 6’3” and 210 lbs at his pro day, Ross possesses the elite size that scouts covet in a WR prospect. He also boasted an impressive 31.5-inch vertical jump and a 9’8” in the broad jump. It is respectable to believe that these measurements could improve as he continues to recover from foot surgery. This size and athleticism help make Ross terrific in jump ball/ contested-catch situations. Following an almost career-ending neck surgery in 2020 and surgery on his left foot the following year, it was crucial to see that Justyn still possessed impressive hops. Although it would have been preferable for his vertical jump measurement above 35 inches, he was on pace with prospects such as Chris Olave and Treylon Burks.

This is how you humiliate a defender. Ross is extremely deceptive and shifty for a player lacking top-level speed in his route-running. He can create tremendous separation off the line and has very quick feet. Once he gets his foot planted, he possesses the body control to change direction and then return to a ball thrown behind him.

Ross is the type of WR that makes his quarterback look good. You can throw it up anywhere close to his vicinity, and he will figure out a way to haul it in. He acrobatically comes back to the ball on this play before snagging it with one hand. He then spins back to the sideline to keep a foot in bounds, displaying tremendous body control.

In case you needed more proof that Ross can be an elite contested-catch specialist in the NFL. I would bet a small fortune that Justyn won several games of Hail Mary growing up.

Ross can juke his defenders out of their shoes. He shows tremendous body control and elusiveness. His speed and lateral quickness change are extremely impressive for a WR of his size. He utilizes his quick feet both in his routes and after the catch.

This seems like a good time to address the gigantic elephant in the room. There is an extremely high chance that Ross never returns to his 2018 form. It is easy to fall in love with his freshman year tape, but he has dealt with severe injuries since then. Although he should fully recover from his most recent foot surgery, his football career was almost tragically ended by his neck injury. After his first season with the Tigers, many had Ross pegged as a first-round talent. I would be surprised if we heard his name called before day three of the 2022 NFL Draft. His success at the next level will be directly correlated to how he continues to recover.

Although Ross had a solid final collegiate season in his return from injury, his statistics took a significant dip from his first two seasons. Recovering from injuries and getting back in shape was crucial to this drop in production. It is challenging for a player to return from an injury that costs them an entire year. Ross returned to a team with a weak supporting cast and inconsistent quarterback play to make matters worse. This suggests that not all of the blame should be placed on Justyn.

It was disappointing to watch Ross run a 4.63 40 at his pro day. He will not win many foot races with NFL-level defenders at that speed. Luckily, his game is not dependent on this. He creates admirable separation and runs crisp enough routes to mask his limitations. It is additionally respectable to predict that he will continue to regain speed and strength as he continues his recovery.

There is not a prospect in this year’s draft class more tantalizing than Ross. Ross seemed destined to be a future first-round pick in his first collegiate season with the Tigers. His current capabilities are now in question after suffering many injuries over the last few years. He made a valiant effort to return from injury but still left more to be desired.

The landing spot will be critical for the continued success of the young WR. He would greatly benefit from a veteran quarterback and patient coaching staff. A handful of teams are prepared to take on the question marks of drafting Ross. Although he is currently a bit of a mystery box, he has shown flashes of his former self and still possesses elite characteristics. He is an intriguing post-hype prospect that teams can acquire at an extreme discount due to the unknown variables. Although he has an arduous journey ahead of him, Justyn Ross can prove to be an absolute steal in rookie drafts if he can overcome his current limitations.