Kaleb Eleby looks like a sleeper in the 2022 quarterback class. In this rookie profile, @FF_Hulsey explains why he is rising up draft boards and should be on your dynasty radar. 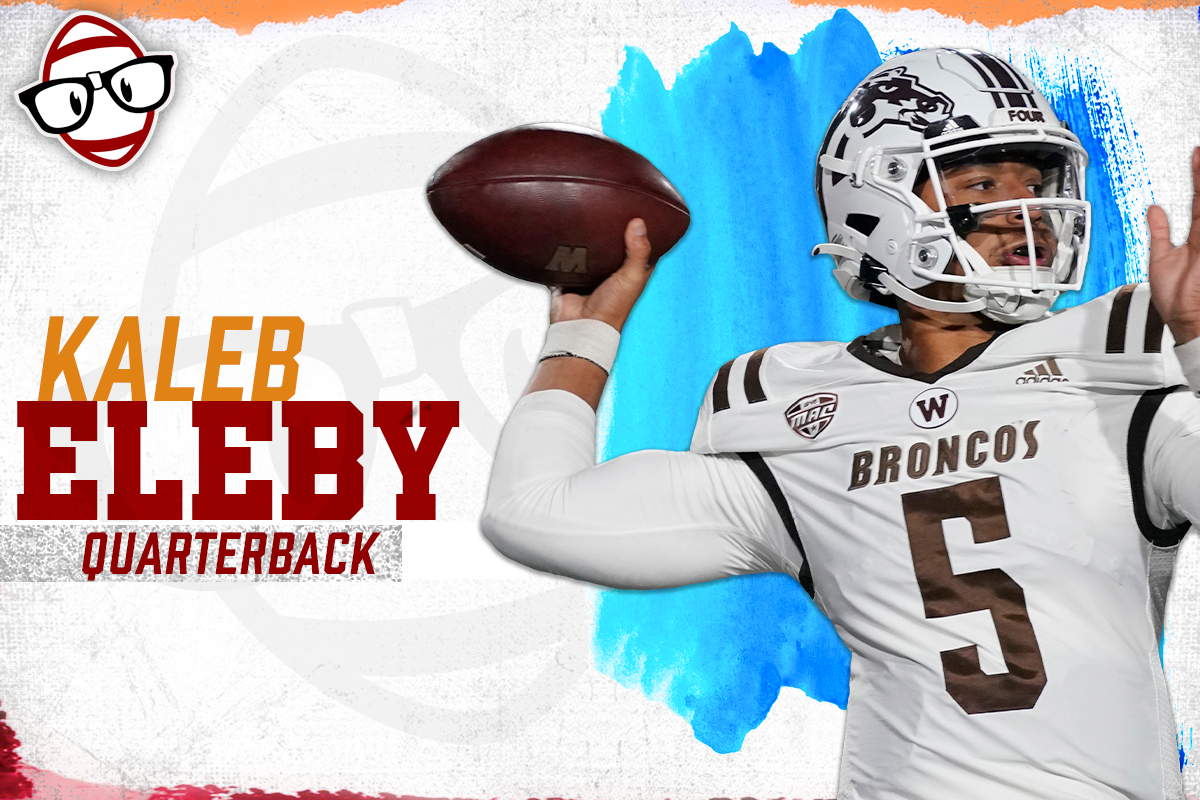 Eleby was a three-star recruit coming out of Pattonville High School in St. Louis, where he had a prolific career as one of Missouri’s top prep quarterbacks. He was named Class 5 Missouri Player of the Year as a senior after leading Pattonville to the State Championship game. Eleby threw for 9,735 yards and 95 touchdowns in his high school career and still owns every Pattonville passing record.

Despite holding offers from Iowa State and Illinois, Eleby committed to Western Michigan in 2017. He graduated high school early and joined the Broncos in plenty of time to make an impact in his freshman season. There seems to be a false notion in draft circles that Eleby lacks pedigree as a small school prospect. Yet he was a higher-rated recruit than Kenny Pickett, Desmond Ridder, Carson Strong, and others in this class while also receiving multiple Power 5 offers.

An injury to then-starting quarterback Jon Wassink forced Eleby into the starting role for the final five games of his true freshman season. Eleby showed tremendous promise, completing 63% of his pass attempts for 1,092 yards and four touchdowns. He threw for 293 yards and two scores in his college debut against Toledo. After not seeing the field in 2019, Eleby broke out in a big way in 2020 as a sophomore. He was one of the most efficient quarterbacks in the country with a 9.0 TD/INT ratio, 11.2 yards per attempt, and a 194.8 QB rating which was topped only by Mac Jones and Zach Wilson. Eleby earned All-MAC honors in the pandemic-shortened season.

It was much of the same for Eleby in 2021. The efficiency numbers dipped slightly in a higher volume season, but he still finished the season as a top 20 FBS quarterback in yards per attempt and QB rating. Some of his top moments as a Bronco included 14 games of 250+ passing yards, two bowl game appearances, and a bowl game win against Nevada. Eleby is arguably the most efficient Western Michigan starting quarterback in program history.

Eleby’s draft stock is at an all-time high after positive showings at the NFL Scouting Combine and Western Michigan’s pro day. He threw the ball downfield with strength, accuracy, and confidence. Some of his times were a bit underwhelming, but speed has never been a noteworthy part of his game. Eleby has positioned himself as an upside Day 3 selection. The Patriots, Lions, and Broncos have reportedly met with Eleby, and all three will be looking to add to their quarterback room through the draft.

Eleby shows above-average accuracy and placement at the field’s short, intermediate, and deep levels. He throws the ball with anticipation and does an excellent job with short timing routes. He leads receivers well and shows the ability to throw guys open. Eleby shows off his accuracy here and places the ball where only his receiver can catch it.

Confidence is not an issue with Eleby, and he does not shy away from pushing the ball downfield. He delivers on deep targets consistently, hitting receivers in stride with tremendous placement. Eleby reportedly impressed NFL scouts at the Combine with his deep ball accuracy. He shows off his arm talent on this deep throw by stepping up and dropping it in the bucket on an outside release. Eleby led the FBS with 11.2 yards per attempt in 2020.

His arm is not exactly in the elite tier, but Eleby does an excellent job zipping balls into tight windows, especially at the short-intermediate levels. He is capable of making any throw asked of him in the NFL. Eleby generates velocity with a quick, compact throwing motion. The ball explodes out of his hand when he has a clean pocket. Eleby zips it between two defenders and delivers the ball in the only window that would result in a completion on this play.

Eleby shows incredible poise, which is something I was continuously reminded of when watching the Michigan film. Against first-round NFL talent on the opposing defensive line with Hutchinson and Ojabo, Eleby was decisive and worked methodically. He stood in the pocket with constant pressure and delivered strikes.

Eleby has an underwhelming 1.71 Relative Athletic Score with bottom tier times in the 40-yard dash, shuttle, and 3-cone. He can move in the pocket effectively on tape, but making defenders miss in open space will not be a part of his game at the next level. There is no doubt that his arm talent, not his athleticism, is how Eleby can win in the NFL.

He is a tad undersized, but I was encouraged by his verified weight at the Combine. There was some concern that he would weigh in closer to the 200-pound mark. 208 is a solid number for being under 6’1”. Eleby used various arm slots but struggled at times to get the ball over the line of scrimmage at Western Michigan.

Eleby is a one-read quarterback at times. He will undoubtedly need to improve in this area before taking the next step. Whether due to the offensive scheme or his shortcomings, Eleby did not consistently show the ability to progress to options two and three.

There are two sleeper quarterbacks in this class to who I am closely paying attention to. Western Michigan’s Eleby is the first, and Southeastern Louisiana’s Cole Kelley is the other. I have watched Eleby for several years, even back in his high school days when he played right down the highway from my hometown. He is Tua-lite in a lot of ways. They are similar in size and excel with placement, especially on timed throws. With Eleby, you see several impressive deep throws on film along with accuracy to all three levels that are well above average. He is currently being mocked in the fifth and sixth rounds, but I can see a team targeting him early on Day 3. Currently, he is my QB8 in the class with a fifth-round grade. Seattle, Denver, and Philadelphia are some landing spots that make sense. Also, keep an eye on New England and Detroit, who recently met with Eleby.

Eleby will likely go undrafted in most four-round Superflex rookie drafts. After the draft, that will make him a high-priority add for me across all leagues. Eleby is a developmental prospect at this stage of his young career. If talent meets opportunity, he could quickly return value in Superflex leagues as a Gardner Minshew-level quarterback.

Visit the Dynasty Nerds Prospect Film Room today for access to a full library of game tape of Kaleb Eleby and hundreds of other college football prospects.

Become a member of the #NerdHerd and gain access to the Prospect Film Room, members-only podcasts, Nerd Scores, and more for just $4.99 per month. Make sure you use promo code FF_Hulsey to take 15% off your membership cost.