Michigan State’s Kenneth Walker III challenged for the Heisman, ultimately faltering later in the season, but emerged as one of the top backs in the 2022 NFL Draft. Dwight Peebles breaks down why he can succeed in the NFL. 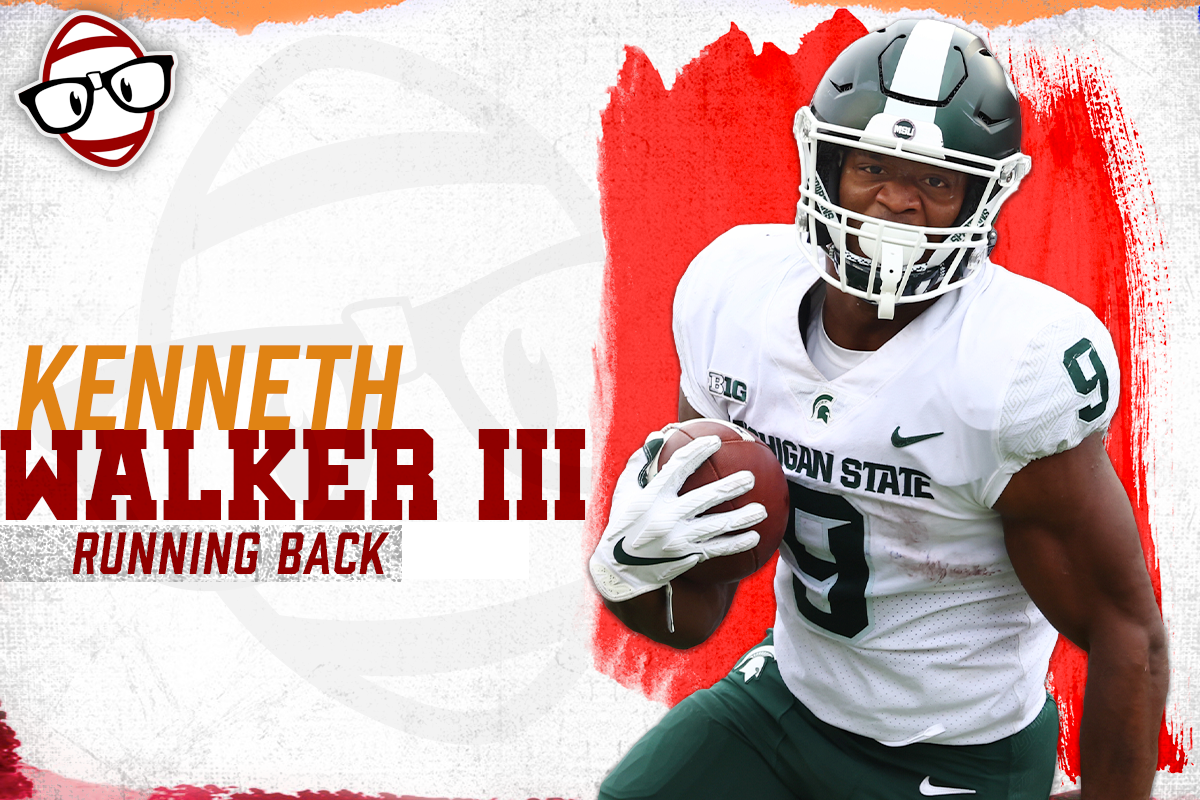 In only one season, Kenneth Walker III has made the most meteoric rise in the 2022 Draft Class and is set to make himself a ton of money in April. He was solid for Wake Forest in the ACC, but Michigan State unlocked Walker, and he narrowly missed a Heisman Trophy invite after a monstrous season.

Walker hails from Arlington, TN, and was a three-star RB in the Class of 2019. He received a few offers, mainly from Division II teams. Wake Forest was the only Power 5 school to offer, and Walker chose to be a Demon Deacon.

Walker rushed for 579 yards each of his first two seasons at Wake Forest but scored 13 times as a sophomore. There were flashes of him being a good RB prospect, but he didn’t get a full workload. He opted to transfer and landed in East Lansing under the tutelage of head coach Mel Tucker.

It was a monstrous junior year for Walker, as he rushed for over 1,600 yards and 18 TDs, leading the Spartans to an 11-2 record and challenging for the Heisman Trophy. Walker added two trophies to his mantle by winning the Doak Walker Award for top college RB and the Walter Camp Player of the Year Award.

Walker does many things well, and his improvement from last season to this season was stunning. Patience and vision were evident at Wake Forest, but they became elite traits in 2021.

Walker displays excellent vision, not just at the line of scrimmage but when he is stopped in the backfield and on the second level. He lines up blockers with body movement, and when he sees a crease, he exploits it.

Big Ten football at its best, a snowy matchup between two top teams. Here is an excellent example of the slightest crease. Walker bursts through a small crease, nearly untouched, at the exact right time and angle.

This is an excellent example of the vision past the line of scrimmage. Four Wolverines are waiting after Walker gets through the line. He takes the perfect angle to keep all of them at bay and takes it to the house.

Not much to say about this play but holy smokes! He’s met in the backfield for what seems to be a loss. Walker makes the first guy miss and sifts through some traffic for a big gain. He never seems to get too frantic and always has his eyes searching for a way toward more yardage.

As well as the missed tackles, Walker was rarely brought down after contact. He averaged 97 yards after contact per game.

This clip is a good example of the balance and then the burst, the next strength. Walker is unfazed by contact and recovers with a burst to find open field and paydirt.

I love Walker’s acceleration when he is in the clear. He can plant a foot and hit top speed quickly. He runs with the ball high and tight and keeps it secure.

Here’s the perfect example, he plants his foot behind the line of scrimmage, the hole lines up, and Walker is seven yards downfield before the defense realizes it. His ability to hit that gear is ridiculous.

Here’s a run that ties it all together. I love the vision to see the hole and the burst to get through it quickly. The defender attempts to tackle him, and Walker quickly regains balance and hits that second gear in a few steps, outrunning most of the defense for another huge gain.

Pass blocking is a big area that Walker needs to improve on. He doesn’t anticipate where rushers are coming from well and needs to work on chipping or redirecting them. Many times, he would barely slow them down.

Weight could become an issue if he doesn’t measure close to 215; 220 would be optimal. It shows when he takes on defenders. If Walker runs into an LB at the second level, he doesn’t have the power to overtake. Typically, he resorts to a spin or sheds the tackle if it isn’t wrapped well, but if it comes to power – Walker doesn’t muscle through.

Pass catching is something he hasn’t shown a lot of, but it is a question mark. In limited opportunity, Walker has demonstrated good hands and the ability to run limited routes. I don’t see it being an issue overall but definitely something we need to see more of.

Before the season, Walker was barely on devy and NFL radars. He has rushed for great numbers and showcased phenomenal skills that can transfer to NFL success. It’s possible that he could hear his name called on the first day of the Draft, but most likely, Walker will be selected on the second day.

For fantasy, Walker is a first-round pick, even in SuperFlex leagues, and should be taken amongst the first three RBs. Regardless of the landing spot, Walker should get the draft capital and be a feature back in 2022. I am confident that he will get a chance from his first day in the NFL, barring a massive tumble in the draft process.