Bobby Bishop (@imbobbybish) profiles Kevin Harris, a running back out of South Carolina. Harris has been held back by injuries throughout his college career, but he has the talent to make a major dynasty impact if given the opportunity. Check out why you should target Kevin Harris with a late round pick in your rookie drafts. 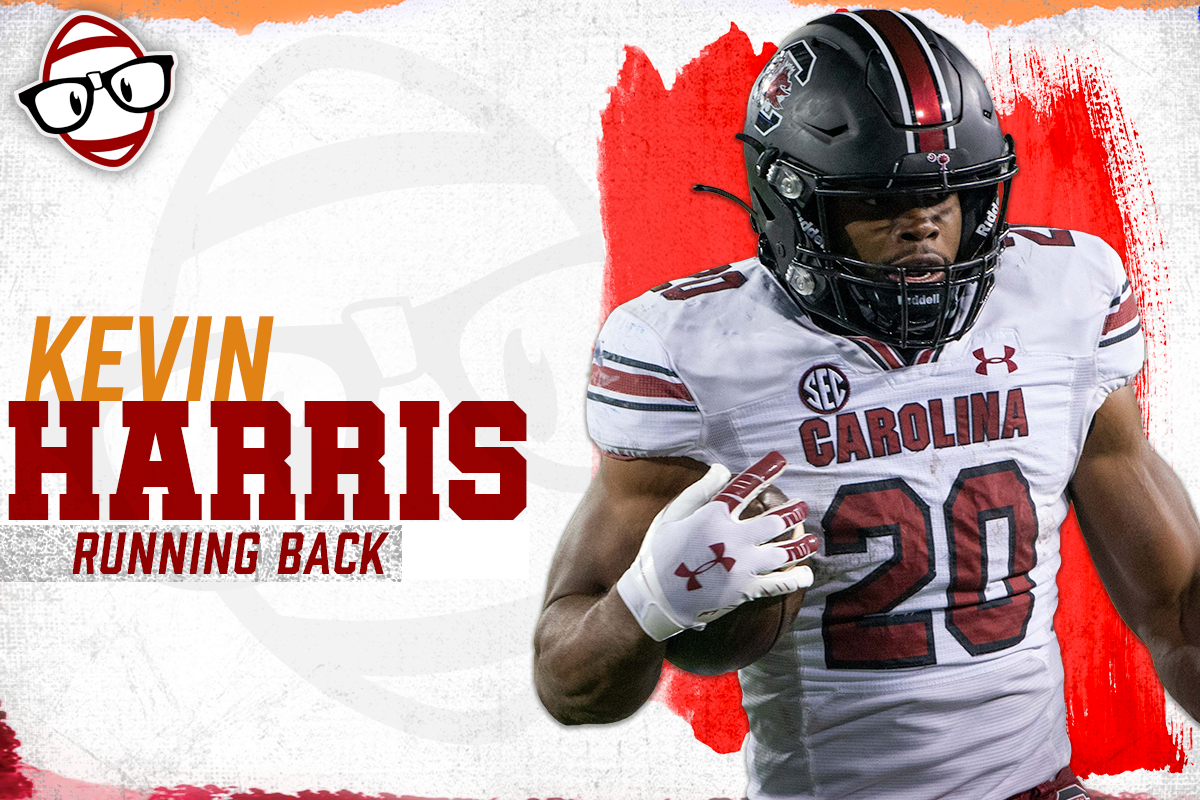 One sleeper of the 2022 running back class is none other than Kevin Harris, who led the SEC in rushing during the 2020 regular season. During his college career, he has dealt with injuries, but he has also shown flashes of being a capable workhorse running back.

As a three-star prospect out of Bradwell Institute in Hinesville, Georgia, Harris was the 44th ranked running back in the nation. He committed to South Carolina, which was his only Power 5 offer. As a true freshman, Charleston Southern could not stop Harris in his first game. Harris had six carries for 147 yards and three touchdowns. He, unfortunately, suffered a torn groin muscle, which required surgery and was thought to be season-ending. Harris bounced back quickly, only missing seven games. However, he was not effective down the stretch. He only received 15 carries in the last four games of the season.

In 2020, it looked like Harris was in line for more touches. Four senior RBs graduated from the Gamecocks’ program, including Rico Dowdle, Tavien Feaster, Mon Denson, and A.J. Turner. Also, a four-star recruit, Marshawn Lloyd, tore his ACL in the pre-season, which sealed Harris’ place as RB1 in Mike Bobo’s offense. He had an incredible 2020 season against an all-SEC schedule. In just ten games, Harris racked up 1,138 rushing yards and 15 rushing touchdowns.

An off-season back surgery caused Harris to miss most of the off-season practices and even the first game of the 2021 season. He had a disappointing 2021 regular season, with his game against Florida standing out as his only game in which he rushed for 100 yards (after having five such games the previous year, two of which were 200- yard games). Harris felt fresh and well-rested following the regular season going into the bowl game against UNC. He rushed for 182 yards and a touchdown on 31 carries. Immediately following this great bowl game, Harris declared for the 2022 NFL Draft.

Harris is extremely explosive. His 38.5 vertical leap ranked second among running backs, and his broad jump ranked third. Kevin tweaked his hamstring a few weeks before the combine, so he did not run the 40-yard dash. Harris will run it at his pro day, and it should be 4.5 or faster.

Harris shows that it takes more than just an arm tackle to take him down in this clip. He breaks two at the line of scrimmage and adds almost 40 yards after contact.

Bruising running backs thrive on tired defenses late in the fourth quarter. Up two touchdowns and wasting clock, South Carolina will run the football. UNC knew this and prepared to stop the run. Still, Harris can find a hole and then punish the nickel, Cam’Ron Kelly, for trying to stop him. Harris carried Kelly for fifteen yards before more Tar Heels rallied to bring Harris down. In honor of Jerome Bettis, Harris’ teammates in Columbia called him “the Bus.” Plays like this help you understand why.

Against Florida in 2021, Harris hit the safety with the Derrick Henry special, stiff-arming him into the next week. He continued upfield, racking up almost 35 yards after contact.

Here, Harris finds a hole and shows off his speed. The safety had a chance of getting him, but he took a bad angle, underestimating Harris’ speed. 88 yards later, everyone in the stadium knew that #20 is quick.

In this clip, Kevin Harris goes untouched from 45 yards out. As he rounds the corner, Harris seems to hit another level of speed and breaks away from the LSU linebacker.

While not the sharpest route running ever, Harris still gets good separation on an angle route. He secures the catch and has the awareness to get into the end zone. He is by no means a receiving back, but you can see that he has plenty to work within that area.

Kevin Harris is a sleeper in the NFL Draft that not many draft analysts are talking about. Personally, I think he’s one of the top five most talented backs in the draft, but injuries are holding him back. Harris should enter 2022 as a second or third-string RB on a depth chart depending on the landing spot. When injuries occur, and Harris gets his opportunity at the next level, he will always do: break tackles and gain yards. Make sure you target Harris during the late rounds of your rookie draft.