With a strong performance at the Senior Bowl, Khalil Shakir’s stock is on the rise. Should you be targeting him in rookie drafts? 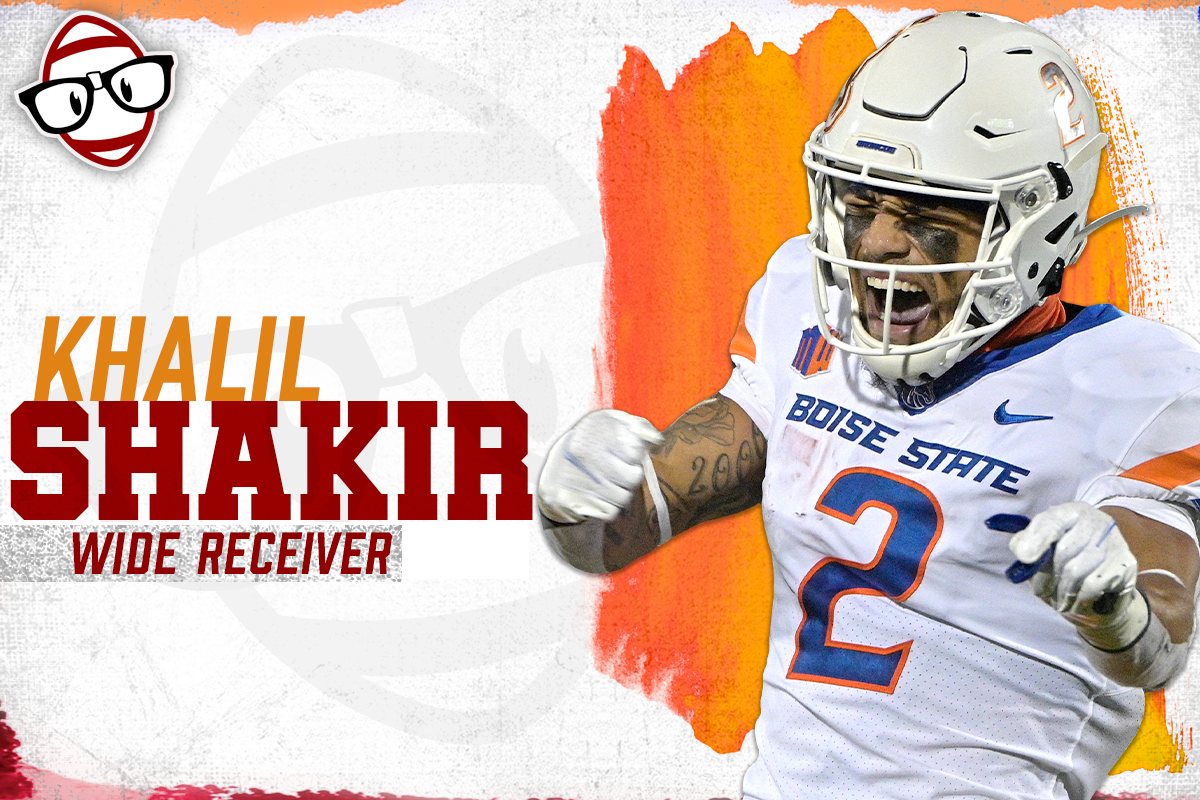 Khalil Shakir is one of the hot names for a G5-sleeper this draft season, and his Senior Bowl week has further strengthened the hype. Let’s take a look at this talented young receiver to see if it’s warranted!

Khalil Shakir was a 4-star prospect out of Vista Murrieta, CA, recruited to G-5 Boise State in the class of 2018. He got on the field as a true freshman but hit his stride in his second year with a 63/872/6 line.

His breakout 2020 season shows limited counting stats due to the COVID-shortened schedule but yielded impressive per-game averages of 102.7 yards and .86 TDs. He capped off his career with a solid 77/1117/7 senior season and added another 130 yards on the ground. He finished as a top-25 CFB receiver on the year.

Talking stats is a bit tougher with G5 receivers- it’s important to keep the level of competition in mind. There’s a reason why guys like Omar Bayless and Jaelon Darden are day-3 / UDFA dudes despite wild college production, and, unfortunately, that’s more the rule than the exception.

Shakir’s raw stats are right up there with elite guys from recent classes. He’s got a Receiving Yards Per Team Pass Attempt (RYPTPA) figure of 3.25, more than Garret Wilson or Ja’marr Chase. His Receiving Yards Market Share numbers are bonkers, including a best-season 42% (he accounted for nearly half Boise’s passing offense!), and his Receiving Yards per Route Run figure of 2.83 is a top-20 number for this draft class (ahead of guys like David Bell and Chris Olave).

The one immediate knock on Shakir is that he’s a non-early declare. We know this drastically reduces the hit rate for WRs, even if they get draft capital- which is a big if.

Over the past couple of years, I’ve developed a metric I call the Composite Production Index (CPI), including a data-based Teammate Score. Using these metrics together yields a much better, more predictive cohort than any individual metric I’ve tested, and it’s the primary tool I use now for data scouting.

I adjust the CPI significantly for conference, and I find that doing so significantly improves its usefulness. The conference adjustment knocks Shakir down to the range of guys like KJ Hill and Marquez Callaway. There are guys in this range that got good draft capital- namely, D’Wayne Eskridge and Anthony Schwartz- but the jury is out still on those guys succeeding at all on the NFL level.

I don’t put a ton of stock into Breakout Age at this point, but I do at least like to consider it, and that improves Shakir’s outlook by a hair, landing him in the tier of players like Dazz Newsome, Jaelon Darden, and Devin Duvernay- and Terrace Marshall! I wish 2022 me could relay this info to 2021 me before the rookie drafts…

Ultimately, I find I produce the best cohort with my Teammate Score. You can imagine that this isn’t much help to Shakir, who played with 0 other NFL WRs. It buries him badly, leaving him around the 124th-ranked WR from the 2020-2022 classes. It’s not a death sentence, though. There are guys floating around down there- like Nico Collins and KJ Osborn- that have flashed in the NFL.

Again, data-scouting G5 guys is tough. I try to take note of guys like Shakir with elite-level production, see if the film lines up, and pay attention to what NFL draft experts are saying. In reality, I think there’s often an unfavorable prognosis even if they get significant draft capital- see Eskridge, Dwayne, circa 2021.

Quick side note- all this film and tons more can be found in the Dynasty Nerds Film Room. Check it out and if you want to sub, use this link to save 15%!

The first thing apparent in reviewing Shakir’s film is that this guy creates a ton of separation. He’s crisp in his breaks and has astonishing suddenness.

Watch Shakir turn the DB around on this whip route before eventually working back to space to help out his QB:

His route-running prowess is more than just agility- he excels at nuances like jab steps and hand fighting, as you can see in this next clip below. But even more impressive are Shakir’s ball skills:

Shakir’s ball tracking, hands, and focus are next-level. Circus catches are routine in his games as he goes up over defenders and adjusts to misplaced balls to make spectacular plays like this:

Shakir has a fluid transition to ball-carrier and plays with anticipation, making guys miss and creating big gains.

He also has excellent releases off the line, often winning his route within the first few steps:

Shakir also offers value as a ball-carrier and kick returner. His solid vision and agility pay dividends here and will help him get on the field in the NFL.

He’s effective in the short passing game, using vision and burst to break plays. He is excellent at finding the soft spot in zone coverage and exploiting it:

Boise even used him out of the backfield when their running back room ran thin with injuries. Shakir proved himself effective on sweeps and even runs between the tackles. He runs hard for a smaller player and fights for added yardage on every touch.

It’s tough for G5 guys to hit in the NFL. Of the 70 top scoring (by PPG) wide receivers over the past ten years, just 12 of them have come from G5 teams- and that sample includes Preston Williams, who was more or less one and done. The guys on there that got day one or two capital were either super-dominators in college (Corey Davis, Devante Adams) or got to show off an elite trait, like Will Fuller’s 4.3 speed. It’s tough. The rest of that cohort had to fight for a roster spot and work their way onto the field.

That’s going to be the most likely path forward for Shakir if he’s to make it on to fantasy rosters- day three capital, return game, impress in camp, get on the field- the Darnell Mooney plan.

There are, of course, guys like Diontae Johnson that unexpectedly land day two cap and make an immediate impact, but that’s certainly common. That said, Johnson isn’t such a bad comp for Shakir’s playstyle or for his profile, a small school kid that impressed scouts with his finesse and quickness- though Shakir is bigger, more productive, and broke out earlier.

All it takes is one team to fall in love, and it certainly helps that Shakir was objectively impressive at the Senior Bowl:

Shakir is the kind of player for whom the combine could be enormous. If he can post an excellent time in the 40 or agility drills, he could boost his stock. Even getting on the field in front of GMs in the passing drills could help him build the momentum he’s carried out of the Senior Bowl.

If Shakir does somehow get second-day cap, I’m in. He’s got traits that translate to the modern NFL.

If he doesn’t get selected until the fourth round or later, it’s a lot more of an uphill battle to get playing time or make an impact. I’m not out at that point, but I often find it wiser to grab backup running backs in the later rounds of rookie drafts rather than wide receivers buried on depth charts.

If you are looking to take shots at WR late in drafts- or if the draftable backs are gone, and he’s still out there- Shakir is definitely a guy to check out.

Thanks for the read, and good luck with your drafts!