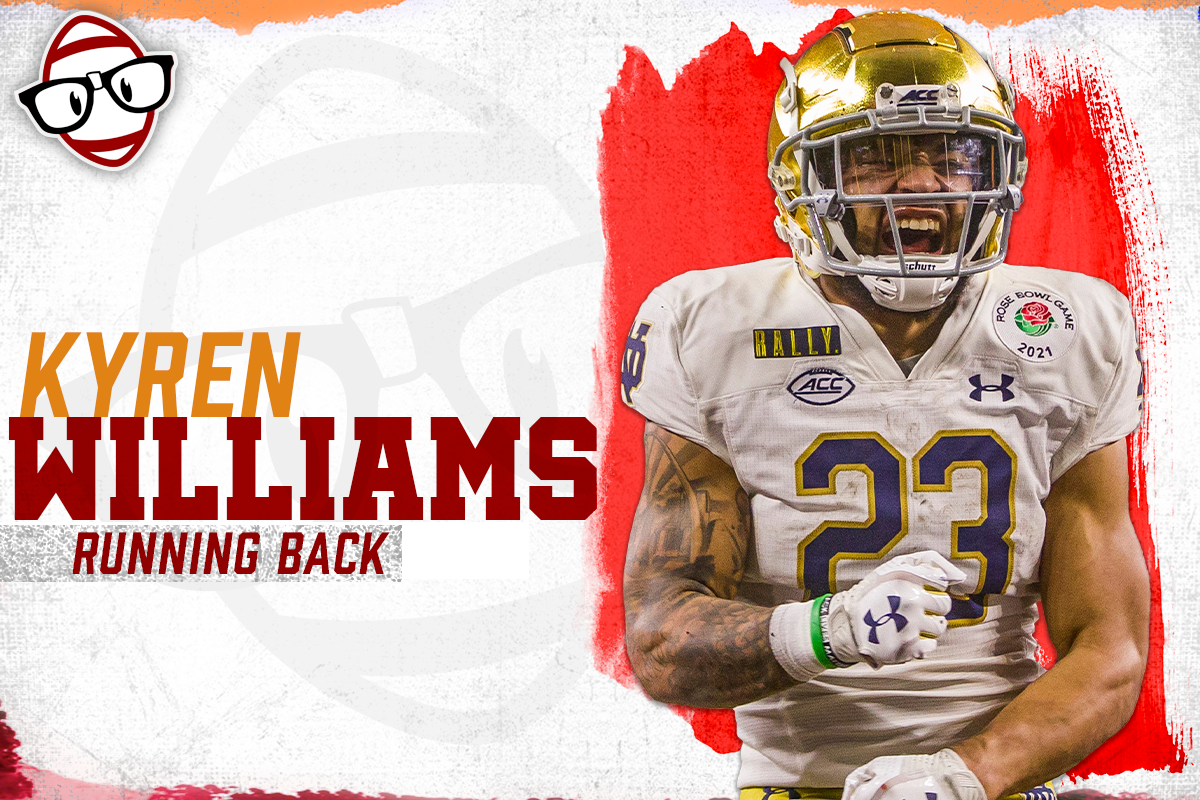 Williams was a four-star recruit coming out of St. John Vianney High School in Missouri, where he led the Golden Griffins to a State Championship. His senior campaign was one of the best in the country; Williams totaled 2,760 yards and 40 touchdowns while earning Offensive Player of the Year honors. He garnered major interest from top college football programs across the Midwest, notably Notre Dame, Missouri, and Michigan. Williams joined Brian Kelly at Notre Dame as an early enrollee and played sparingly in the first four games of his true freshman season.

Williams established himself as one of the top all-purpose backs in college football and a future NFL Draft selection during the 2020 season. He gashed Duke with multiple dynamic chunk plays in his first collegiate start, which set the tone for a season that would end with a CFP Semifinal appearance at the Rose Bowl. Williams led all FBS freshmen in rushing yards, rushing touchdowns, and total touchdowns. He finished his redshirt freshman season with 1,438 yards, 14 touchdowns, and an ACC Rookie of the Year honor.

In 2021, Williams was again a major catalyst for the Fighting Irish offense. He continued to stake his claim as one of college football’s elite running backs. While his efficiency was down across the board, primarily due to the talent lost on offense from 2020, Williams still accounted for 1,354 yards of offense and 17 total touchdowns to cap a historic career for one of football’s blue blood programs. His top moments at Notre Dame include a 91-yard rushing touchdown against North Carolina in 2021, the fifth-longest in program history. He was also named ACC Running Back of the Week in a double-overtime win against then-No. 1 Clemson, in which he rushed for 140 yards and three touchdowns against arguably the best defense in the nation.

Now Williams looks to solidify his draft stock with a strong pre-draft season. The 2022 running back class has a clear top three with Breece Hall, Isaiah Spiller, and Kenneth Walker. After that initial group, it opens up quite a bit with backs like Tyler Allgeier, Rachaad White, and Williams looking to test favorably and earn coveted draft capital. Williams draft stock has been on the rise since September of 2020, but there are understandable concerns about his frame and workload capabilities. The NFL Combine will be crucial for his pro prospects. Day 2 draft capital is not out of the question, depending on how things shake out over the next several weeks leading up to the draft. Williams is my RB4 in the class, and there is a lot to love about his skill set, along with a couple of noteworthy red flags. Let’s dive in.

An obvious strength of Williams’ skillset is his undeniable creativity. He is a dynamic weapon with great footwork and explosiveness, especially outside. This allows him to change direction with ease using his lateral agility. There are several plays on tape where the initial plan has failed, but his creative instincts take over for a big play. Williams has been an outstanding punt returner since his high school days, and those traits are evident when running the ball as well. That level of creativity and shiftiness will translate.

I consider this a severely underrated part of Williams’ game. Once considered just average in this area, he developed this trait significantly leading up to his redshirt sophomore season. Williams rarely goes down on first contact despite having a smaller frame. In fact, 77.3% of his 1,004 rushing yards came after initial contact. Williams finished his 2021 season near the top of the leaderboard in forced missed tackles and yards after contact. His unbelievable leg churn allows him to fight through a crowd of defenders and absorb contact while still maintaining stability as a runner.

Williams flashes some serious short-area burst to go along with wicked stop-and-go ability. He can effortlessly turn on the jets with natural explosion out of his cuts. The stiff arm followed by his burst up the sideline on this 91-yard touchdown run against North Carolina is quite impressive.

KYREN WILLIAMS TO THE 🏠!

I took a deep dive into Williams’ film, and the one skill I saw consistently in every game was his merciless pass protection. He is elite in blitz pickup. None compare to Williams in this area of all the running backs I have scouted in this class. The term “willing blocker” does not accurately describe the impact he makes. He patrols the pocket with active eyes in pass protection and takes pride in having his QB’s back. Williams is an intense competitor, and it jumps off the tape when watching him stick 250-pound linebackers. His advanced technique as a blocker is what NFL teams will fall in love with, and I foresee him being drafted much earlier than some expect for this reason. Regardless of their current depth chart, every team in the league needs a player like this.

Another trait that will instantly translate to today’s NFL is his receiving ability. Williams has significant upside as a receiver, drawing comps to players like Austin Ekeler, Giovani Bernard, and James White. Notre Dame used him in a multitude of ways, including in the slot, and that kind of pass-catching upside is going to vault him up draft boards. This, paired with his aptitude as a blocker, could lead to immediate impact at the next level.

Here is another example of Williams’ quickness, agility, and vision on full display. Once again, using these skills to pick up chunk plays after contact. He is patient, breaks a tackle, then allows his instincts in the open field to do the rest. I was surprised and encouraged by the number of plays similar to this one that I found while digging through the tape in the Dynasty Nerds Prospect Film Room.

This one is obvious. There are very legitimate concerns about Williams’ frame. Notre Dame lists him at 5’9” 199 lbs, but we should know with more certainty in the coming weeks. While he is sturdy and has impressive strength, his size is not ideal for a traditional three-down role. He needs to add weight to avoid adding his name to a long list of sub-200 pound backs that have struggled to stay on a roster. This is the biggest question mark for Williams, and it raises serious concerns about his ability to create power and drive through NFL defenders.

Ball security is another potential issue. Williams fumbled the ball eight times in college and appeared to be a bit careless with the football at times. This is a definite area of improvement for Williams.

Williams has a Day 2 grade for me, and I expect him to be one of the first running backs selected in April. His pass protection skills and receiving ability will push him ahead of others at his position. Coaches will fall in love with his blue-collar style of play and competitiveness. For dynasty managers, this means he should see the field early and often.

I think Williams is very well suited for today’s NFL. He is a dynamic yards-after-contact machine with good contact balance and patience as a runner. He finds small cracks in the defense and uses short-area burst to create. Williams does have size concerns which may limit his potential as a durable bell-cow back, though. The aforementioned ball security issues will be something to monitor moving forward. Regardless, he is an excellent fit in the modern-day NFL and will likely be drafted as such. Williams is one of the best all-purpose backs in this draft class. Be ready to take him early in the second round of your Superflex rookie drafts.

Visit the Dynasty Nerds Prospect Film Room today for access to a full library of game tape of Kyren Williams and dozens of other college football prospects.

Become a member of the #NerdHerd and gain access to the Prospect Film Room, members-only podcasts, Nerd Scores, and more for just $4.99 per month. To celebrate the draft season, take 15% off to join with promo code film15.