The 2022 quarterback draft class looks notably weak, but Malik Willis has the upside to separate himself as the top quarterback. He is extremely athletic and has a very strong arm. If a well-coached team drafts Malik Willis and allows him to sit and develop for a year, Willis could end up as one of the top fantasy quarterbacks in 2023. 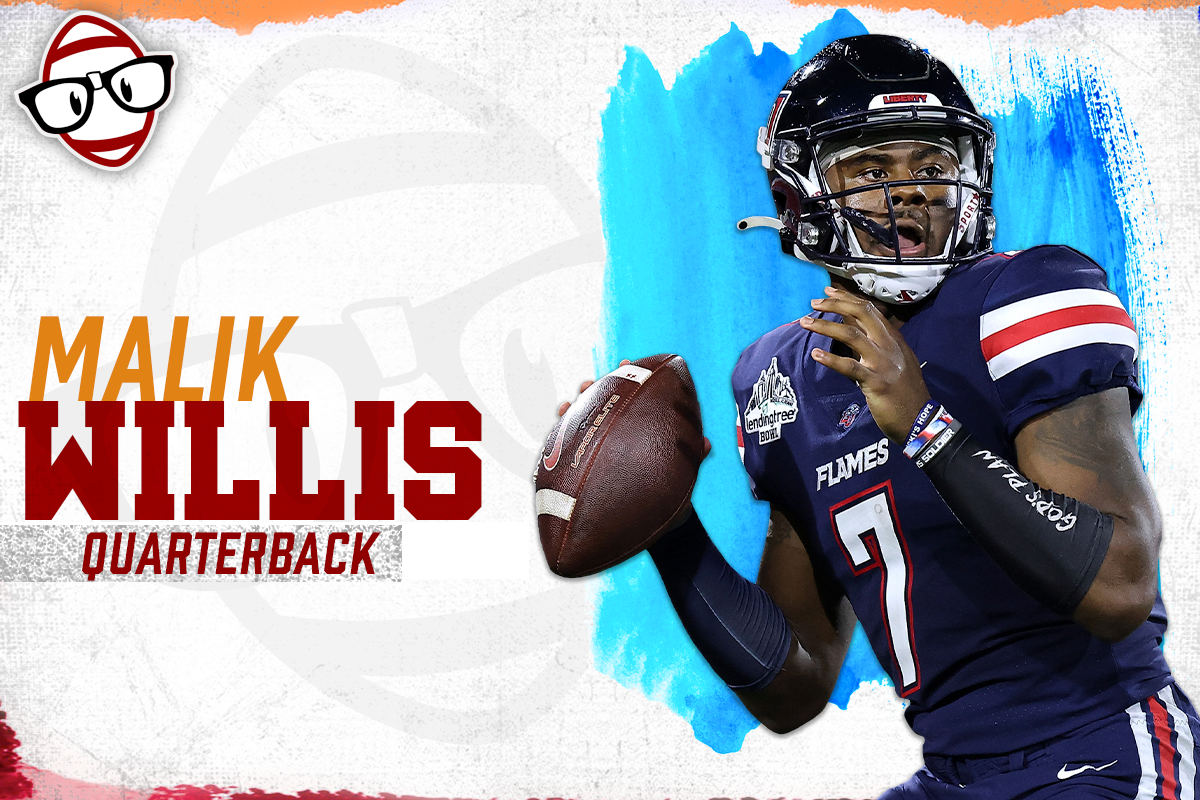 The 2022 quarterback class is notably weak on paper. Not a single quarterback is standing out as a can’t-miss-future-franchise-quarterback type of prospect. When examining traits, Malik Willis flashes several NFL-level physical traits that can’t be taught. Willis has a good chance of becoming a decade-long franchise quarterback if he ends up in a competent franchise and is given the tools to succeed.

Recruitment and Path To Playing Time

As a three-star prospect out of Roswell High School in Georgia, Willis committed to Auburn University. As a freshman, he lost the starting job competition to Jarrett Stidham. As a true freshman, he still got some playing time, most notably exploding for a 67-yard rushing touchdown to cap off a blowout against Mississippi State. The QB job was Jarrett Stidham’s the following season, but Willis wanted to stick around for his chance. His one touchdown as a sophomore came during a blowout to Liberty University.

After spring practice in 2019, Auburn head coach, Gus Malzahn, made an announcement that would end up career-altering for Willis. He announced that a freshman would start for Auburn in 2019, either redshirt freshman Joey Gatewood or true freshman, 5-star recruit and Auburn legacy, Bo Nix. Willis decided to transfer to Liberty University after drawing interest from Oregon University and Boston College. Hugh Freeze’s offense was a key deciding factor. Willis applied for immediate eligibility, but he was rejected by the NCAA, which forced him to sit out all of 2019.

Willis exploded onto the scene in 2020. I was lucky enough to get a glimpse of his talents in person against Southern Mississippi. He had not yet been hyped up as a potential first-round quarterback by the national media, but the talent gap between Willis and everyone else on the field was noticeable. He was easily the fastest guy on either team.

During the 2020 campaign, Willis put Liberty on the map, helping them attain a Top 25 ranking for the first time in program history. He had one bad game against NC State, during which he threw three interceptions (Liberty lost 14-15). Still, Willis put up massive numbers on the season, including 2,260 passing yards, 20 passing touchdowns, 944 rushing yards, and 14 rushing touchdowns. He closed out the season with an impressive game in the Cure Bowl against the twelfth-ranked Coastal Carolina, where he rushed for 137 yards and four touchdowns.

As 2021 began, more pressure was on Willis’ shoulders. Many draft analysts mocked him as a first-round pick, with Spencer Rattler and Sam Howell as the only quarterbacks consistently mocked above him. Willis started the season hot, putting up 17 total touchdowns to 0 interceptions in his first five games. Unfortunately, Willis had a rough October and November, throwing twelve interceptions in his final eight regular-season games.

His most important game was against Ole Miss. Scouts from half of the NFL teams were in attendance, but Willis did not perform well. He threw three interceptions and was sacked nine times. Liberty’s offensive line was no match for an SEC defensive line, and he was under duress throughout the game. This loss seemed to have a hangover effect, as Willis only completed 41% of his passes and threw two interceptions two weeks later against Louisiana.

Willis bounced back to end the season against Eastern Michigan in the LendingTree Bowl. He threw for 231 yards and three touchdowns while adding another two scores on the ground. In addition to his college career, Willis will be competing in the Senior Bowl. This opportunity could help place him atop the 2022 quarterback draft class.

Most missed tackles are a vital statistic to showcase the shiftiness as a runner. According to PFF, Willis forced 90 missed tackles in 2021, with only Kenneth Walker III forcing more at 91. Willis is sure to be a dynamic threat as a runner in the NFL.

Willis’s downfall in 2021 could be attributed to his weak offensive line. According to PFF, Liberty’s offensive line was ranked 89th out of 130 teams in pass-blocking efficiency. Furthermore, Liberty gave up 52 sacks (51 of which were Willis). Only Akron gave up more sacks with 63.

In this clip, Willis showcases an elite burst of speed. It’s impossible to look at him running the option and not think about Lamar Jackson. I’m really hoping we see Willis run the 40-yard dash at the combine. I think he could easily be in the 4.35 to 4.45 range. His athleticism puts so much pressure on a defense.

Improvising out of Structure

The play blows up on Willis, but he stays on his feet, keeps his eyes downfield, and fires a strike. Being able to improvise when the original play blows up and still gain positive yards is important for the modern-day NFL quarterback.

Willis’ arm strength is extremely impressive. Here, he throws a ball 50 air yards off his back foot. I think his arm strength is yet another trait that will have scouts falling in love with Willis’ upside.

Willis’ receiver hit his corner with the Gabriel Davis special, but Willis’ throw wasn’t even close. He showcased deep ball accuracy sometimes, but he also had some bad misses. At the NFL level, you cannot miss receivers this badly and be a successful quarterback.

Willis had many negative plays in 2021, which resulted from poor judgement. Here, the play breaks down, and Willis rolls out to the right. He sees his receiver gesture for the ball. He throws it up, but he doesn’t get it over the corner. All of his momentum was going away from the throw, and Willis didn’t have enough to put into the pass. The correct decision would have been to throw it away, knowing that it is a risky throw. Willis will have to make better decisions in the NFL.

In conclusion, Willis is the most talented quarterback in this draft. He has incredible intangibles that can’t be taught, but his weaknesses are in areas that can be coached and improved. In this regard, his prospect status reminds people of Patrick Mahomes and Josh Allen. Both guys oozed upside and potential coming out of the draft, but they were not as polished as other guys right away.

Suppose a team believes in Willis’ potential enough to let him sit for a year and help him develop his accuracy and decision-making. In that case, Willis could develop into the next superstar fantasy quarterback. Willis could be the first QB off the board by the end of the draft process.