Next up in our rookie coverage is third down specialist Max Borghi. @ReflipeWThenuz breaks down the player and his NFL potential. 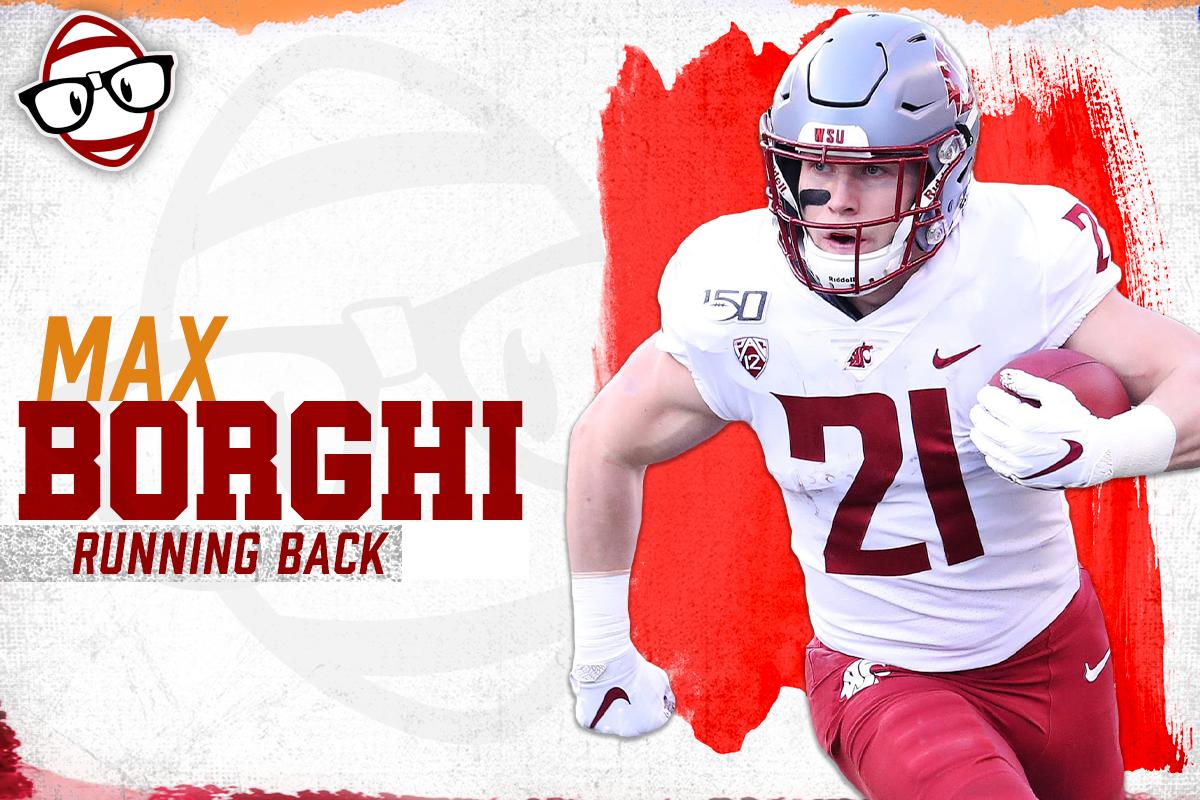 Once thought of as a Christian McCaffrey-type player, Max Borghi has fallen down draft boards the last couple of seasons since his breakout sophomore campaign. The odds of him ever being a workhorse RB in the NFL are slim and none. However, this does not mean he cannot be an effective weapon and consequently a valuable asset to your dynasty rosters. Borghi has been on the Doak Walker watchlist for multiple seasons for a reason. Without further ado, let us examine this incoming rookie RB.

All other combine events were not attempted.

Borghi came to Washington State as a 3-star prospect out of Pomona High School in Arvada, Colorado. 247Sports ranked him as the number 16 All Purpose Back in his class. While not as highly recruited as some, Borghi chose Washington State over other West Coast and Mountain Schools such as Colorada, Arizona, and California. You can find his High School film here with MaxPreps.

Borghi made an immediate impact upon his arrival in Pullman as a true freshman. The dynamic playmaker put up over 700 total yards and double-digit TDs. Borghi followed up his freshman campaign with a true breakout as a sophomore to the tune of over 1,000 total yards and 16 TDs. Most importantly for us in the Dynasty community, he proved to be a weapon in the passing game, amassing 86/597/5 receiving. This proved to be the high water mark as Borghi endured injury woes and diminished usage over his final two seasons at Washington State. You can see his career stats below.

As I mentioned before, the most encouraging thing for Borghi heading into the NFL is his passing game chops. He is a weapon in the receiving game and a willing blocker. While Borghi did minimal testing at the NFL combine, his 20 reps on the bench press can be seen in the upper body strength in the blocking game.

In this first play, Borghi is used as an outlet out of the backfield. He also shows his underrated strength as he fights off the defender to extend the play for the first down.

Watch Borghi set up the defender on this play as he hurdles him showing a decent amount of explosion.

Note how he works his way to the outside to help the tackle on the pass block on the play below.

Borghi does an excellent job of maximizing his athleticism. You can see on the play below he is about to bounce the play to the outside. He has enough speed to get to the second level and secure the first down.

In this following clip, you will see him once again use that bounce cut. In this one, Borghi uses his physicality to drive the ball into the endzone.

Borghi routinely fights with all he has extending plays through sheer effort as in the example below.

While it can definitely give a misleading perception about a prospect, I enjoy watching players’ highlights. I feel that by watching them we get an insight into the ultimate upside of a player. For Borghi, the best highlights to watch are from his sophomore campaign. That is before he lost Head Coach Mike Leach and prior to his covid shortened junior season. You can see the highlights of this game below. When you watch these ask yourself if you can see an NFL third-down back.

Borghi brings quite a bit to the table for an NFL franchise. He does however have several weaknesses that will hurt his draft stock. For starters, Borghi does not possess homerun speed. We have yet to see an official 40 times from Borghi as he didn’t run at the combine, but my film review shows him to be quicker than fast. He also needs to work on his blocking as well. Despite being a willing blocker, Borghi lacks good technique and sometimes simply throws himself in the path of oncoming defenders. In order to secure his long-term future in the NFL, he will also need to work on his return game as well.

When I watch Borghi, I see a player who wins with heart and desire as much as talent. I have seen him compared to a number of players throughout his college career. I see a bigger and slightly less shifty Danny Woodhead when I watch his game. A player who can win in the passing game and play a limited role in the rushing game as well. He could be a nice complimentary piece to a big back in the NFL.

Borghi was an interesting player to scout. I remembered his breakout sophomore campaign a couple of seasons back, so I was curious what my final assessment would be. In the end, I see a player who can definitely play in the NFL. However, he is destined to be a complimentary piece. In order to be relevant for your dynasty rosters as we advance, Borghi will need to be selected to the right spot. Hopefully, for his sake, he can secure a J.D. Mckissick or James White type of role for a team. I expect him to be drafted on the third day of the NFL Draft unless he absolutely blazes at his upcoming Pro-Day. In your dynasty drafts, Borghi could be an intriguing late-round stash in the hopes he provides some value at the highly volatile RB position.

Thank you for reading this article! Please be sure to join the #Nerdherd, so don’t miss out on any of the amazing things we have to offer @Dynastynerds.com. Use my promo code DynastyHolliday for a 15% off discount. You will get rankings, extra podcasts, and access to our rookie film room. For just a couple bucks more you can get access to our revolutionary DynastyGM tool. So much for so little, why miss out on all the fun. Also, you absolutely must check out our new mock draft tool. Find it in your Apple & Android app stores. Follow me @ReflipeWThenuz for more dynasty content and other musings.