Quentin Lake is looking to follow in the footsteps of his father. Could he fine himself being selected by the same team that drafted his dad 33 years ago? 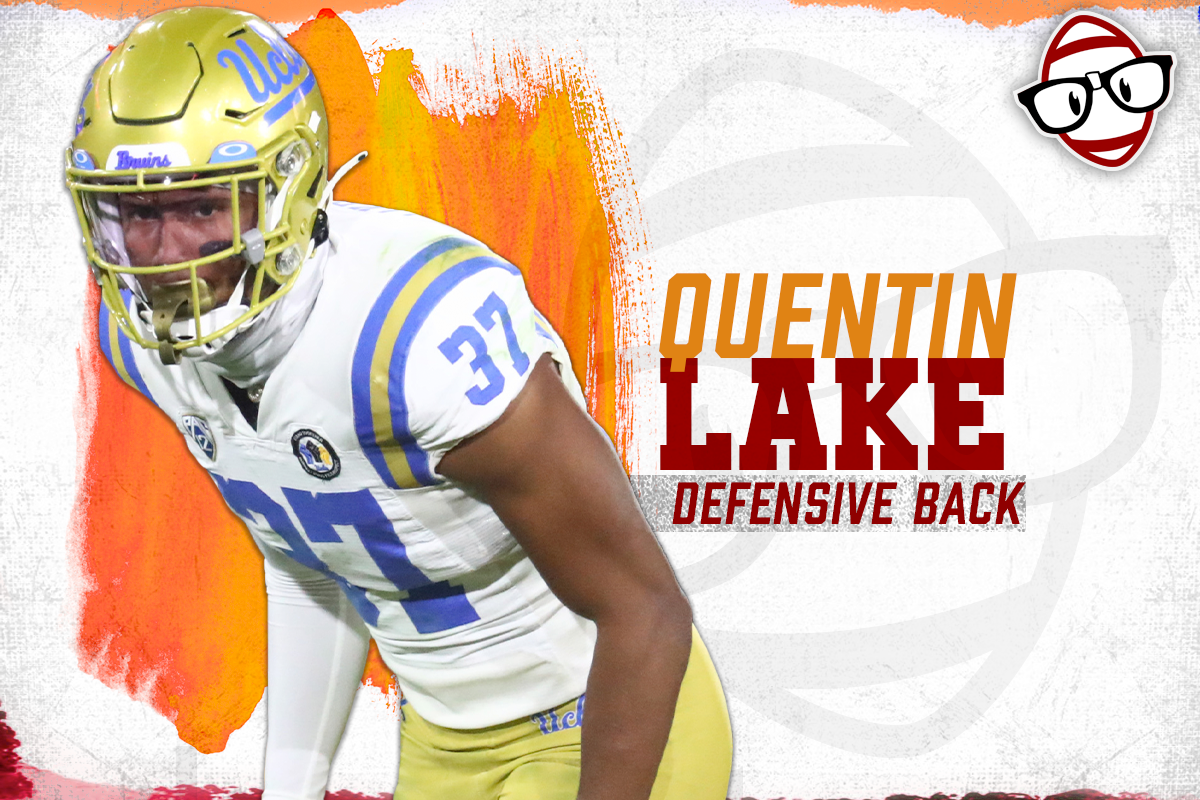 Add Quentin Lake to the list of names among the deep group of draftable safeties in the 2022 NFL Draft Class. He also has NFL bloodlines as his father, Darnell Lake, was drafted by legendary Pittsburgh Steelers Head Coach Chuck Knoll in the second round of the 1989 NFL Draft. Lake won’t be drafted as highly as his father because he doesn’t possess the same physical gifts as his dad. I remember watching his dad as a boy as he ran down Carl Pickens, former Cincinnati Bengals receiver, from behind and knocked the football out. Lake seems to be an intelligent player, but he won’t be able to make plays like that.

However, he has five seasons of experience for a Power 5 program. Film study shows that he can be a serviceable NFL backup and special teams player at worst. The 2022 NFL Draft class is deep at the safety position, which will likely push Lake down the draft board quite a bit.

Quentin Lake graduated from Meta Del High School in Santa Ana California he was recruited and received offers from: UCLA, Illinois, Nevada, Oregon State, and San Jose State. Those other schools probably didn’t have a chance to sign Lake with his father having played for UCLA. He was a 3-star recruit in the 2017 recruiting class, being the 44th positionally ranked player in California.

Lake didn’t become a full-time starter for the UCLA Bruins until the 2021 Collegiate season. He did see action at times in games during previous seasons but couldn’t grab a hold on the starting position.

Lake is in the perfect position to take the football away. The Bruins seem to play a zone coverage on the play, and Lake jumps the route on the underthrown pass.

Lake isn’t a physical safety; that’s just not his game. He takes poor angles, uses bad technique, and gets run over often when making a tackle attempt. He would have been much better off going lower around the ankle area for the tackle.

Lake is a very raw safety prospect, there is the aspect of him understanding the rigors of the NFL That’s not a small thing and it will endear him to staff’s that value NFL bloodlines. He is strictly a safety prospect, so that’s good as it would give him a potentially decent floor depending on the defensive scheme he’s drafted to.

I compared him to Sean Davis, the former Pittsburgh Steelers second-round pick. Davis was a smart player and was able to get the other secondary players lined up correctly. Eventually, though, it was beyond apparent that he couldn’t play free safety at an NFL-caliber level. The team replaced him and subsequently sent him to the bench. There very well could be a team that talks themselves into Lake as an eventual starting option in the draft’s middle rounds. That would be a decision that will be regretted soon, though. IDP league owners would be well served to leave him on waivers.

It was enjoyable taking a trip down memory lane when thinking about Lake’s father. Those mid-90s Steelers defensive units were just downright nasty. There is some potential for growth with Lake, as he didn’t become a starter until 2021. He will have to cut his teeth as a special teams player, and he may have to have a great pre-season to make the 53-man roster. How quickly he can grow with NFL coaching is up to him.