From JUCO to Arizona State, Rachaad White emerged as one of the top backs in the class with a massively productive 2020 season. Where will he be drafted and should he be on your rookie draft radar? 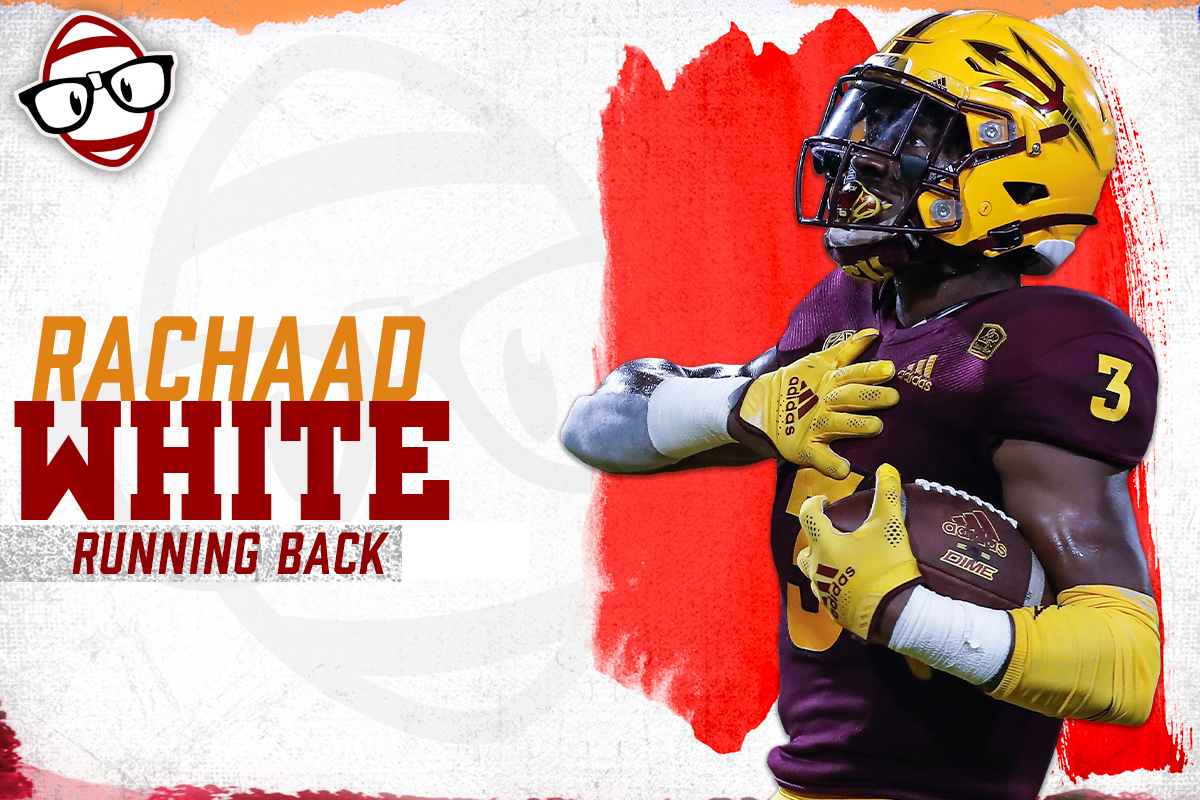 Rachaad White was one of the most productive backs in the NCAA this past season and went from a possible UDFA to being a potential day two pick. The former JUCO transfer is an older back and has a few things to work on, but he is one of the top backs in the class. He could creep early into the second round of your rookie drafts with draft capital.

TALE OF THE TAPE

White grew up in Kansas City, Missouri, and played his high school ball for Center High School. He tallied 1,325 yards rushings, over 2,000 all-purpose yards, and was named first-team Class 3A All-State as a senior. He had many offers but ultimately decided to attend Nebraska-Kearney. After one redshirt season, he transferred to Mt. San Antonio College.

He rushed for 1,264 yards and scored ten times as a sophomore. He garnered a three-star rating on 247Sports as a JUCO player and transferred to Arizona State.

There were flashes of what makes White so good in limited action as a junior. He averaged 10 yards a carry and had nearly 600 yards on only 50 touches. White was clearly the best back for the Sun Devils, and 2021 was his turn to shine.

White has excellent burst, his ability to plant his foot and get upfield in a hurry is uncanny. He doesn’t have elite speed, but his ability to quickly get up to top speed allows him to break many long runs.

The acceleration pops on nearly every play he gains yards; it’s impressive how quickly White can cover ground.

White has a plethora of ways to cause people to miss, including jump cuts, spin moves, and a nasty hurdle – lethal when he uses it.

White doesn’t lose much speed when he jump cuts and can string together multiple cuts and still get forward through a hole when needed.

I saw three times he used the hurdle, and White selectively uses it – defenders are starting to realize runners can do this, and it can often put a runner in a dangerous predicament.

Here is the spin move, White runs into a pile and spins right out of it while using that burst to find the open field and gain a chunk of yardage.

White doesn’t create a lot of yardage on his own, but he has an eye for the slightest hole and can often get through it quickly with burst.

It appears to be a big hole, but White could have bounced it outside when he hits the second level. Instead, he sees a gap as the linebackers are engaged and bursts through it.

This play puts it all together. The vision to see the hole quickly close, jump cut to find the lane, and then explosion to take it to the house.

White is one of the best pass-catching backs in the class. He will never need to come off the field, and it would allow him to be a third-down back at the least. I feel White could be a three-down back and a dangerous back capable of low-end RB1 numbers.

Nothing, White is perfect! Okay, so that’s my bias speaking. As a blocker, White is rough. He has the size, but his technique is poor. Often, he doesn’t even slow down rushers.

White has good contact balance, but he’s not very powerful. He’s not going to move piles and power through tacklers. He can bounce off them and run through arm tackles, but White will go down most times when engaged head-on.

At 6’1”, he is an upright runner and sometimes tries to get too cute. White will dance around, trying to create, when he needs to get forward and get what he can. White isn’t incredibly agile and will downshift too often, trying to develop when he should be going ahead at top gear to get what he can.

Even as an older back, I have no qualms targeting White in the second round of rookie drafts. Draft capital, as always, will be an issue. I am not sure what the NFL will think of him. White has enticing skills and could be an excellent three-down back. But teams may see him as a complementary back without a path to consistent carries.

Before rookie drafts and the combine, White is my RB 4 or 5. I have Isaiah Spiller, Kenneth Walker, and Breece Hall in the first tier and above my next tier. White and Kyren Williams are the next tier for me.

White should have a role in the NFL, and I would like to see second-day draft capital. If he falls to the fifth round, my valuation will take a huge hit. If White lands in a murky situation with bad capital, I would target him in the latter part of the second round or early third round. White’s value will take a massive hit as an older prospect if he can’t find the field early.