Skyy Moore converted from QB/CB to become one of the most intriguing WRs in the 2022 class. @timbmartens breaks down the profile of a potential round one NFL pick. 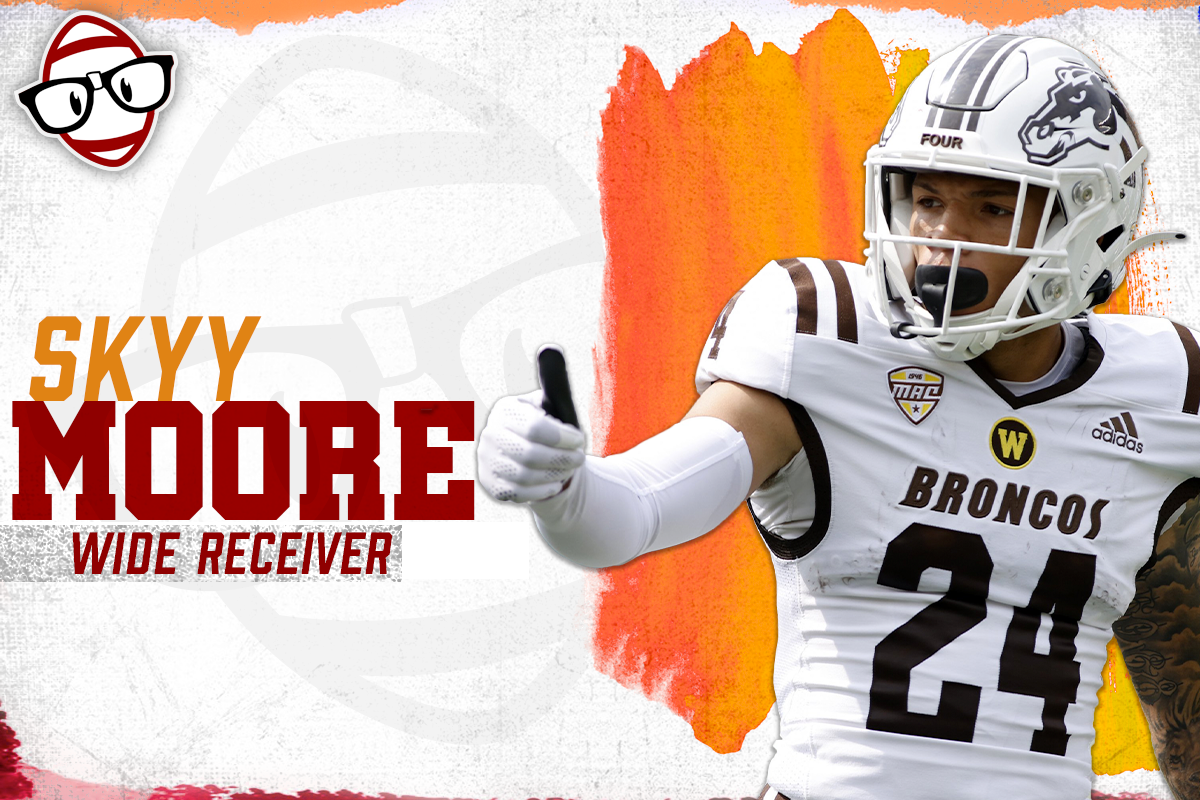 While Western Michigan University football may not be a Power-5 program, the school is no stranger to seeing their athletes’ names called in the draft. In the past 16 drafts, pass-catchers like Greg Jennings, Tony Scheffler, Corey Davis, and D’Wayne Eskridge have all had their names called in the first three rounds of their perspective drafts.

This year, a new name will be added to that list: Skyy Moore. Let’s look at Moore’s profile, college career, and expectations coming into the NFL.

Many of the premier WRs in the 2022 NFL draft have been running routes and catching touchdowns since a young age. Moore was the guy throwing the TDs and stopping them from being scored in high school. As a three-star recruit out of Shady Side Academy in Pittsburgh, PA, Moore was a two-time Allegheny Conference Offensive Player of the Year as a QB. Additionally, Moore received Conference Defensive Player of the Year honors as a CB.

According to Western Michigan’s profile, Moore became the first player in conference history to rush and pass for 1,000 yards in back-to-back seasons. He totaled 100 career touchdowns and 3,500 yards. Moore was also a standout basketball player.

When Moore stepped onto campus in Kalamazoo, Michigan, he hit the ground running. When he converted to wide receiver, Moore tallied 802 yards, and three TDs on 51 catches his freshman year. He was a first-team all-MAC selection, the first receiver to be honored as a freshman in WMU history. He was also only the third freshman receiver to be awarded the honor in the MAC since 1982.

In his COVID-shortened sophomore season, Moore kept his collegiate pace in his yards-per-reception. He tallied 388 yards and three TDs on 25 catches in five games.

In his final season in Kalamazoo, Moore broke out with 1,292 yards and 10 TDs on 95 catches in 12 games. In a dominating performance in DeKalb, IL, Moore racked up 206 yards and hit paydirt four times against Northern Illinois. Moore’s 95 catches in the 2021 campaign were tied for ninth-most in the FBS.

Watching Moore in several games, he does a fantastic job of leveraging himself open on the field. He uses his hands and feet to set up defenders and almost instinctually knows where to place a defender to make sure he gets open for his QB. His years as a CB have likely helped his knowledge of taking advantage of defenders.

His slant routes and route running out of the slot, in particular, stand out. I would argue he is one of, if not the best, slot receiver available in this class. He keeps his upper body active and sinks his hips well to keep defenders on their toes anytime they are lined up across from him.

Moore shows an excellent knack for tracking and securing the ball in the air. He has sure hands and has been very strong in contested catch situations throughout his college career. Some of these result in highlight-reel catches where he shows excellent control while being pushed and even interfered with.

Moore plays bigger and stronger than his size may show. While he is only 5’10”, Moore is built thick and uses that to his advantage. He often uses his strength and build to fall forward for extra yards when being tackled. He is not afraid to take on contact and fight through it on his routes. This results in opportunities for YAC after he has fought through his defenders.

Moore shows a knack for blocking in his tape and willingness to jump in and take defenders on to help release his teammates. While he may be a smaller receiver, he isn’t afraid to do the dirty work and fight in the trenches for his team. This will be important early in Moore’s NFL career as a willing blocker will have more opportunities to see the playing field.

While Moore did have a strong 40-yard dash at 4.41 seconds, it doesn’t show up all that often on his tape. Most of the separation Moore gets comes from setting up his defenders and leveraging position rather than athletic talent. And while the 40-time was impressive, he didn’t measure particularly strong in the rest of his relative score.

As mentioned above, Moore is a bit smaller at 5’10”. It is not impossible to overcome. But it does mean his work is cut out for him a bit at the pro level. He will need to continue to fight through defenders, not be pushed around, and use technique to get himself open at the next level.

While Moore did have success at the college level, he has only played the WR position for three years. Many of the other receivers in the draft have played the position for 7+ years. Couple this with the fact that Moore played in the MAC compared to a Power-5 conference. It is hard to know if Moore will be able to adjust to the NFL speed with his lack of experience.

There are reasons to have some concerns about Moore’s size and experience. But what he has produced on the field has been extremely impressive. Moore shows the ability to win at several different levels. His sound technique and ability to set up defenders give him advantages on many of his routes.

Moore is projected to be a second-round pick in the NFL draft. I believe this will be the early second round. It is even possible a team falls in love with him in the late first and snatches him up. This depends on how the draft falls and how early other WRs are taken.

For Moore to succeed, he would be best suited for an offense with a true alpha WR already rostered. While he has played outside in college, I believe he is strongest in the slot. If Moore ends up on a team with a competent QB and an alpha teammate that draws the defense’s attention, the “Skyy” is truly the limit for him.

Get ready for your rookie draft with the DynastyGM!! Rankins, trade calculator, league analyzer, and much more. For just $4.99/month or bundle with the Nerd Herd for just $6.99/month and get extra podcasts, the Dynasty Prospect Film Room, and more.