Is Trey McBride the NFL’s next great tight end? @JoeBeldner highlights why the incoming rookie has what it takes to become elite at the next level. 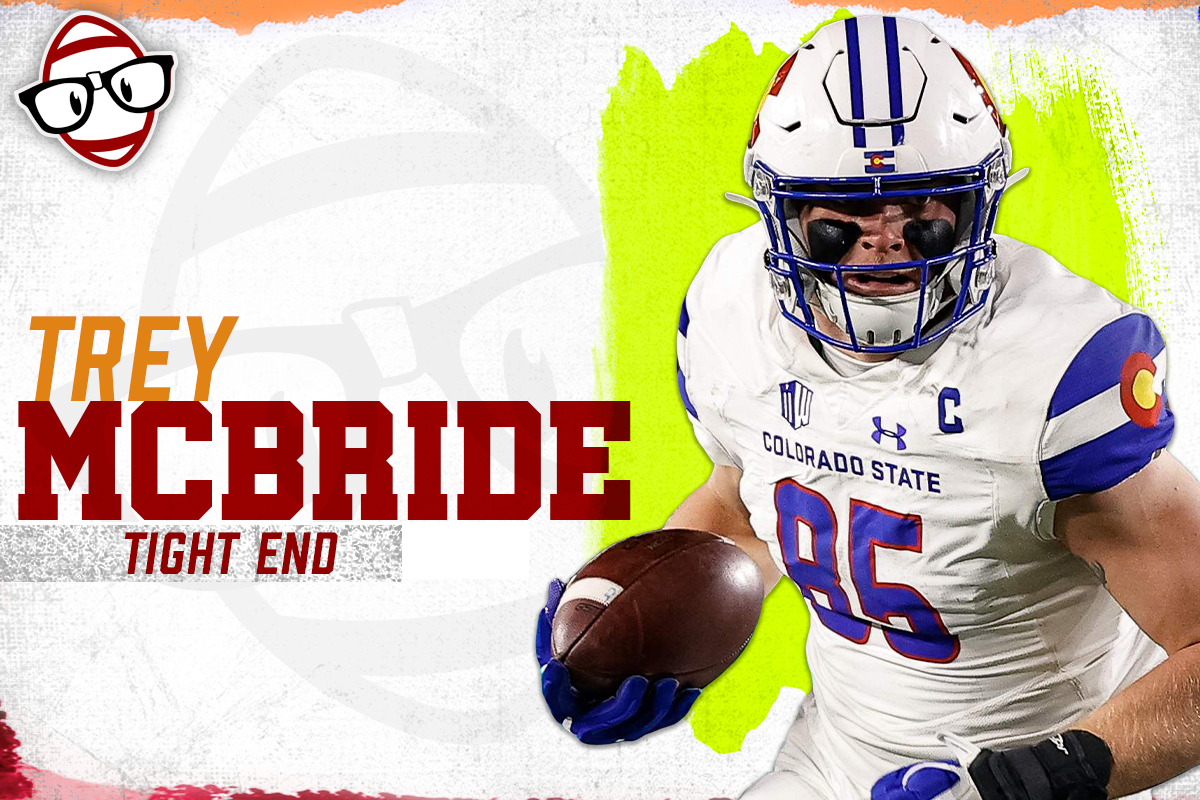 The 2022 NFL draft class is loaded with an abundance of tight end talent with tremendous potential. Few prospects can separate from the pack and have their collegiate games translate to the pros. Trey McBride has the size, athleticism, and drive to emerge as the alpha of this coveted class.

The Alpha of the Pack

Standing tall at 6’4″ and 260 pounds, McBride admirably fits the desired archetype of the modern-day NFL tight end. This is a crucial distinction between him and other TE prospects in this year’s draft class. Although he has excellent hands, strength, and quickness, McBride stands out as a blocker on the football field. The burly TE is extremely physical in the blocking game and displays extreme intelligence in his reads. Like the great George Kittle, McBride embraces contact and seeks to dominate his opponents. This is an instinctual character trait that cannot be taught. His hunger and passion for blocking should escalate his ability to excel at the NFL level quicker than his peers.

Now I know what you are thinking, blocking is awesome and all, but how will this translate to fantasy football? McBride has the agility and pass-catching ability to dominate opposing defenders physically. His offensive repertoire will get him on the field, but it will be his advanced blocking skills that will keep him there as a rookie. It should not come as a surprise that McBride utilizes his physical gifts as a blocker and as a pass-catcher. He does most of his damage on short passes, bulldozing through anyone who comes in his path. McBride’s offensive game reminds me of a less polished but more physical, T.J. Hockenson.

McBride exploded onto the scouting scene with his 2021 season at CSU. He ended up finishing the year with 90 catches for 1,121 yards. These statistics blew his prior two seasons out of the water. He surprisingly only finished with one TD in his final collegiate season. Although this can be seen as a weakness, it is more respectable to blame the system and talent around him for this shortcoming.

McBride has the perfect build and athleticism to be a red-zone monster in a heavier-equipped system. His best game might have come in his senior season against Wyoming. He finished this contest with nine catches for 98 yards. This yardage total set a school record at CSU for the position. McBride’s historic 2021 season ultimately earned him the prestigious John Mackey Award.

He shows great vision in taking advantage of an opening over the middle here. McBride impressively displays his ability to create after the catch and play through initial contact. It could just be that they share the same number, but plays like this remind me a whole of George Kittle. Although I do not think that McBride is the caliber of athlete that Kittle is (few are), the two are cut from the same cloth.

This play perfectly portrays how I see McBride doing most of his damage at the NFL level. He has the perfect combination of speed, athleticism, and physical gifts to maximize the potential of dump-offs and screen passes. He explodes after the catch on this play and then steamrolls defenders before leapfrogging out of bounds.

Good luck stopping this guy once he has a full head of steam. This dude is the definition of a freight train. McBride also excelled in baseball and basketball at the high school level. He set records for the most home runs and most points scored for each sport. This is an admirable representation of the type of athlete we are dealing with.

A significant obstacle preventing McBride from hearing his name selected before Day 2 of the NFL Draft is the program he played for. Although Colorado State is a respectable program, the school is not known for producing NFL talent. He chose to attend the school because he liked the coaching staff, offensive system, and a strong desire to stay close to home. Before this decision, McBride received offers from California, Colorado, Kansas State, Navy, Northern Colorado, and Wyoming. Although there are impressive prospects at the position who played for more established programs, McBride is more than capable of succeeding at the next level. We should not fault him for his supporting cast or level of competition.

An area of improvement for McBride would be his route running and balance. He does an excellent job of overpowering his defenders but needs to work on his footwork and timing. This is a common weakness for young players, which can be improved with practice and coaching. Nothing about McBride’s game screams, “polished.” Although that might be my favorite part of his repertoire, some refining, and added finesse could take his game to the next level.

A Diamond in the Rough

The utilization of the TE position has gone through an extreme transformation in recent years in the NFL. The position used to be a bit of an afterthought in offensive game plans but has now emerged as a primary focus in some systems. Travis Kelce, Mark Andrews, Darren Waller, and Hockenson are arguably the top pass-catching targets on their respective teams. McBride possesses the tools and raw talent to join this elite TEs group eventually. If drafted into the right system, he could immediately impact the league and evolve into a fantasy monster.

Buy in early before McBride reaches his full potential. He checks all of the boxes that we seek in a TE prospect. He has excellent hands, natural physicality, and has improved astronomically every year at CSU. His unique offensive versatility will most likely make him a day-one-starter, which should help escalate his growth and development. Due to these attributes, McBride is far and beyond the top option at the position in rookie drafts. We have found a diamond in the rough, and his time to shine is imminent.