Matt Cooper (@Devy2DynastyFR) looks at one of the top WRs in the 2022 draft, Arkansas stud Treylon Burks. Where should you take him in your rookie drafts this summer? 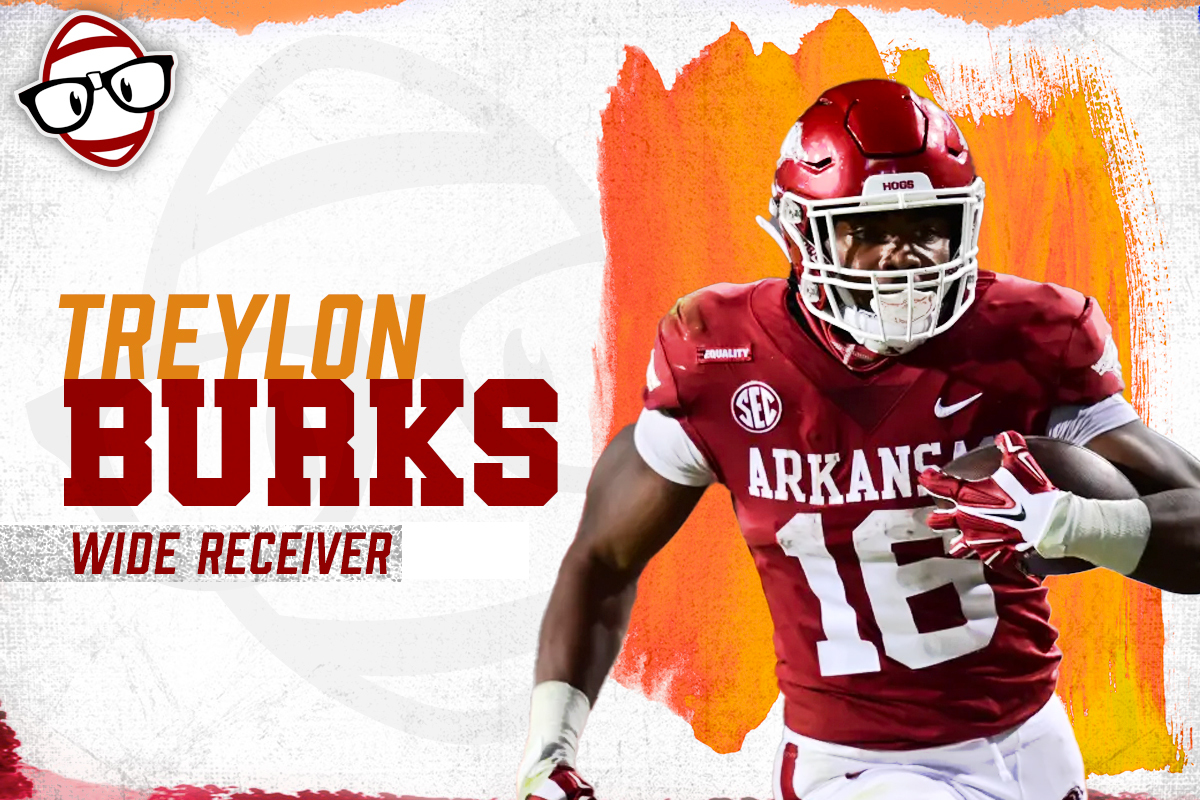 When discussing the 2022 WR class, one name always seems to rise to the top. Treylon Burks, the 6’3” 225 lb stud out of Arkansas, has dominated against SEC competition. He improved every season, breaking out as a sophomore in 2020 and building on that by posting career bests this year across the board. But what kind of player are you getting if you draft him? What are his strengths and weaknesses and how might they translate to the NFL? Let’s take a look at the film!

The most obvious selling point with Burks is that humans his size are not supposed to move the way he moves. He’s a freak, in the best possible way. He plays in a conference full of future NFL athletes and he is routinely the fastest one on the field. His short-area burst is also elite. But how does he use that athleticism to produce on the football field? Let’s take a look.

Something you frequently see is that when he catches the ball with space to run, his athleticism surprises defenders into taking bad angles.

Here, Burks does a good job using his physicality (something we’ll discuss below) to knock the CB off balance and create separation on a slant route. But watch how dangerous he is after the catch. The safety comes down thinking he has the proper angle to tackle Treylon, but the burst that Burks puts on after the catch surprises the defender, and he whiffs. As Burks reaches the sideline, another defender is in a great position to make the tackle. Burks makes him wrong too and is able to turn the corner. Treylon creates 15 extra yards on the slant with his athleticism, and if he had another yard or two on the sideline it might have been a house call.

Something I saw consistently on Treylon’s film was him catching the ball at or near the line of scrimmage and turning it into a big play with his legs. Here are a few examples:

Here Burks gets to the outside and makes two defenders miss with burst and speed before stiff-arming a third defender. The fourth defender to get to him finally brings him down, but only after a 30 yard gain.

Again, Treylon surprises two defenders with his speed, leaving them to dive at where they thought he would be. He takes it for a huge gain.

Another way that Burks uses his athleticism to his advantage is in contested catch situations. He is tall, with long arms and massive hands. In fact, Arkansas had to special order gloves for him because they don’t make receiver gloves in his size. He also has an incredible vertical leap, great body control, and a knack for high pointing the ball in traffic. All this leads to a huge catch radius. It is a major boon to a QB when the play “doesn’t work” and nobody is open but you can throw it up to Treylon and get a big gain anyway. Treylon does this often. Here are just a few examples of Burks playing Superman:

We’ve established that Treylon is big. But not all big guys know how to use that to their advantage, and not all seem to relish contact. One of my favorite things about Treylon Burks is that he plays up to his size. Whether it’s trucking a defender on a run block assignment, using his hands effectively as a route runner, or stiff-arming defenders into the grave… Burks is not afraid to play bully ball. He has a tremendous strength advantage on basically every corner he goes up against, he knows it, and he’s not afraid to use it. I already showed you a play above where he uses his strength to get open on a slant, but here are a few more examples of him using his strength and physicality to make big plays for his team:

Here Burks and his defender are hand-fighting and he does a great job using his strength to create enough separation to grab this back shoulder throw.

This stiff arm speaks for itself. It’s scary when a wide receiver catches the ball and then turns into Derrick Henry.

This is probably offensive pass interference that isn’t called, if we’re being completely honest. But again, you can see how strong Burks is. And I love that he’s not afraid to play bully ball. He creates enough separation not only to catch the ball but to use his gamebreaking burst and speed to take this to the house. Alabama is known for being physically imposing, but Treylon is putting the hurt on them instead. That’s the third time in this game that Burks bullies Alabama for a huge play.

On this play, you see Burks highlighted at the bottom of your screen. He doesn’t catch a pass here, but you see him use his strength as a blocker. He man-handles that defensive back and opens up a lane for his teammate to get a big gain. NFL teams will love to see this.

It is worth noting that, more than any other major prospect in this class, Burks has shown the ability to be used everywhere on the field. He has shown he can win on the outside, play the “big slot” role, and excel on gadget plays. I’ve even seen him line up in the backfield. In a lot of ways, Arkansas used Treylon Burks like a giant Deebo Samuel. It’s definitely valuable that he’s shown the ability to line up all over the field and be successful.

Burks isn’t a perfect prospect, there is no such thing. Let’s take a look at an area where he could get even better.

Filling Out The Route Tree

One thing I noticed is that Burks has been extremely limited in his route tree. I don’t know if this is because he is only adept at a few routes, or if it’s just a matter of him doing what Arkansas is asking of him. But as I comb through his film, almost everything I see beyond the line of scrimmage is either a slant, a go route, or a post. It may be difficult for him to create separation against NFL DBs if he is this limited in his route tree because he will become predictable.

I want to be clear here, I’m not saying that Burks is a bad route runner. In fact, I’ve seen some very good routes on tape for him. Burks did what was asked of him at a high level, and he produced. I do think he can continue to improve and refine his technique. If he does this, he will be able to manipulate defenders, getting them to turn their hips while he explodes in a different direction. He has flashed the ability to do this, but with his explosiveness, he will be extremely dangerous if he can learn to do it more consistently. Here’s an example:

Burks makes a subtle movement to the inside as if he’s going to run a slant. The defender turns his hips to jump the slant and Burks explodes to the outside for a corner route. You can see how much separation he creates, and it leads to a huge touchdown. Plays like this are not as common as you’d like them to be, but he’s shown he has the ability. If he can learn to run routes like this on a consistent basis, the sky is the limit.

Treylon Burks clearly has the highest ceiling of any WR in the 2022 draft class. I would be surprised if an NFL team doesn’t draft him in the first round to be their WR1. He should be able to produce right away because even amongst NFL players he’s an elite athlete. I could see his career trajectory following a similar path to that of DK Metcalf. DK produced his rookie year off sheer physical dominance, but then ascended to that elite tier of WR as a second-year player when he became more nuanced as a route runner. Hopefully, he lands somewhere that will creatively find ways to get him in space while he develops as a route runner. Depending on landing spot and draft capital, I think Treylon Burks should be in consideration as high as the 1.01 in 1QB rookie drafts.

All clips used for GIFs are from the Dynasty Nerds Film Room! Watch full-game film on Treylon and other prospects in under 10 minutes. One of the best perks of being part of the #NerdHerd.

The Superman themed video clip comes from my YouTube Channel, the Devy to Dynasty Film Room. You can watch an in-depth breakdown of Treylon Burks on that channel here!