Tyler Allgeier is a power back coming from BYU. Does he have the power to be a dynasty rookie running back sleeper? @DanT_NFL will answer that question for us. 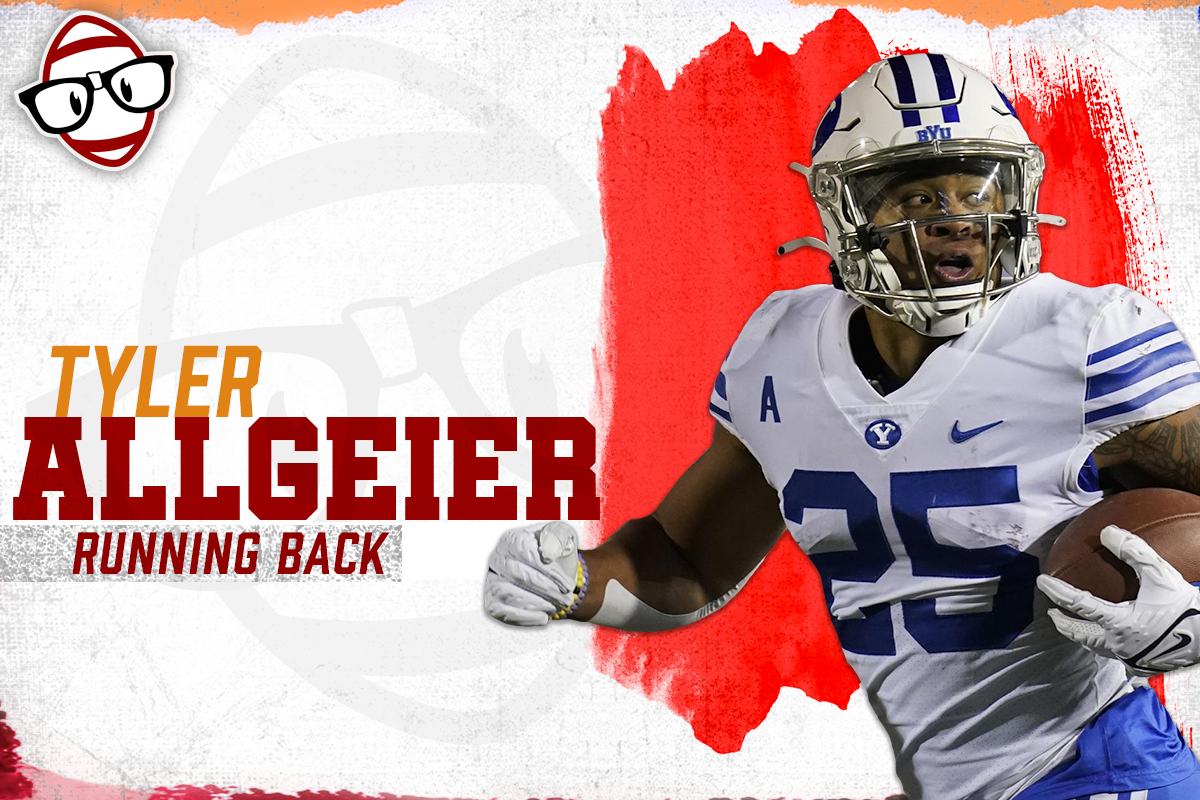 Tyler Allgeier is a power back coming out of BYU with great size. He began his college career as a linebacker but transitioned to running back after his sophomore year. However, he was very productive during his two years carrying the rock. Is this young man just getting started and learning the position? Or was he simply able to take advantage of his athleticism against some weak competition? Read on to find out where Allgeier should rank amongst the 2022 rookie running backs.

Allgeier was a 2-star recruit coming out of Kaiser High School in Fontana, California. He ended his high school career as the leading rusher in Kaiser history. Allgeier enrolled at Brigham Young University in the fall of 2018. In his freshman year, he only played in four games and only saw nine carries. In his sophomore season, he split work between LB and RB. It wasn’t until the 2020 season that Allgeier was featured primarily as an RB and had most of the work in that backfield. That is where our evaluation can begin.

In 2020, Allgeier played in the same offense that saw Zach Wilson’s stock rise to the second overall pick in the 2021 draft. We didn’t see his carry mark break twenty in a single game despite this. This is a number he broke very frequently during the 2021 season. Allgeier was able to break a hundred yards in six out of eleven games in 2020. This included a 173-yard performance in BYU’s bowl game against the University of Central Florida. He was able to haul in 14 receptions during 2020, and optimistically we saw this number double in 2021.

Despite being in an offense that produced almost a hundred fewer points on the season, 2021 was a career-high year for Tyler Allgeier. In 2021, Allgeier broke 1600 rushing yards and amassed 23 touchdowns. He was the fourth-leading rusher in the nation. These numbers included a very impressive 266 yard and five touchdown game against the University of Virginia Cavaliers. As mentioned previously, we saw the total receptions double from 2020 to 2021. This is an encouraging sign for his potential fantasy football value at the next level.

It is very tough to judge how NFL teams value running backs nowadays. Over the years, we have seen a decline in draft capital at the position. What was once first-round draft capital is now quickly slipping into the second round. It has reached a point where an RB going anywhere on Day Two carries a positive indicator. PFF currently has Allgeier ranked as their fourth running back in the class. Just a reminder, those are actual football rankings, not fantasy rankings. The hope is to see Allgeier drafted on the second day. The second and third-round difference may not be as important as the landing spot.

When turning on tape for Allgeier, the first thing that pops out is his power. He runs with the mindset that he can knock over anyone in his way. And at the college level, that seemed very true! This may have a lot to do with him beginning his career as a linebacker. Allgeier lowers his shoulder in this clip as he gains momentum through the hole. He can shed the initial tacklers and build up steam to truly truck a defender and pick up many yards after the point of contact.

Allgeier does have some very nice burst acceleration despite not possessing the greatest top-end speed. Once he has identified a hole, he can quickly shift to second gear to drive his way to the second and third levels. In this clip against North Alabama, he can identify a cut-back hole and quickly accelerate to the speed needed to take advantage of it.

Allgeier won’t be mistaken for Alvin Kamara on the field regarding receiving ability. But he has shown the ability when called upon. He hauled in 28 receptions his senior season while running various routes. In this clip, we can see that he uses his hands to extend out to get the ball and also secures the catch before turning upfield. These traits are the basic building blocks of a receiving running back.

Pass protection is tricky as most college running backs are not called upon to do it too often. It is also something that NFL teams will focus on teaching young running backs during their first training camp. In this clip, we can see that Allgeier gets beat in pass protection, but it is his man who can eventually grab the sack.

Allgeier is a very nice RB who will be best served as part of a two-back committee. His play reminds me of AJ Dillon, and we may see him land in a similar spot post-draft. I doubt he will get second-round capital as Dillon did in 2020, but I don’t doubt he will be a day two pick. His best landing spot may be a team that already features a smaller pass-catching back but looking for someone to take over goal-line/short-yardage work. Examples of this would include the Jets, Dolphins, Chargers, Eagles, or Lions. There are also several spots where he may be featured as the primary back, including the Falcons, Seahawks, and Texans.

The landing spot will have a lot to do with where Allgeier falls in this running back class for dynasty fantasy football purposes. I currently see him as a third or fourth-round flier who may have upside if the starter in front of him goes down with an injury. I would give him an edge in non-or half-PPR formats as he will score most of his fantasy points by finding the endzone. If he gets drafted as a backup to one of your starters, I would be on the lookout to grab Allgeier as a handcuff starting in round three.