Tyler Badie has been one of the best-kept secrets in the dynasty community. In this rookie profile, @FF_Hulsey explains why this future PPR threat will be a high-priority target in all of his rookie drafts. 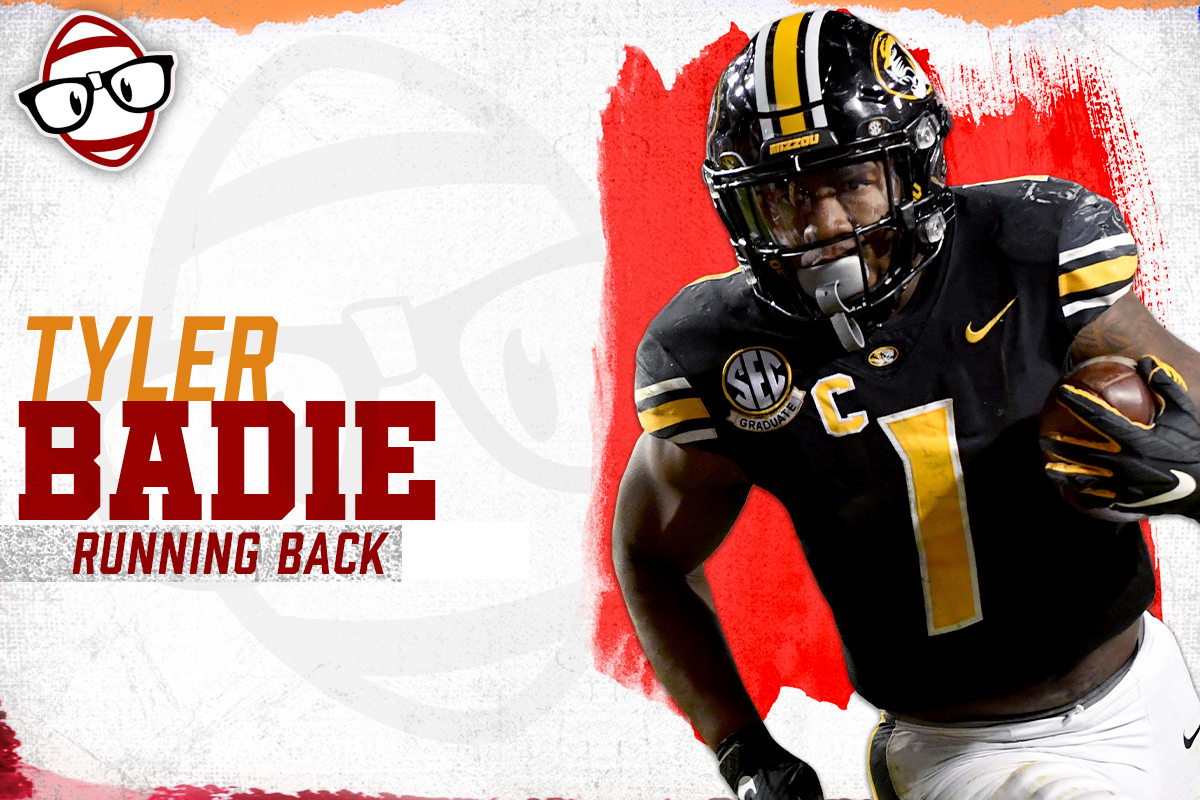 Badie was a three-star recruit coming out of Briarcrest Christian High School, where he established himself as one of the top running backs in Tennessee. Originally from New Orleans and displaced by Hurricane Katrina, Badie’s family moved to Baltimore, then Memphis, where he settled in at Briarcrest Christian. He ran for over 1,100 yards and scored 21 touchdowns as a senior.

He gained momentum in his recruitment after posting a verified 4.46 40-yard dash time, a mark rarely touched by high school players. Looking to follow in the footsteps of Antonio Gibson and Kenneth Gainwell in his own backyard, Badie initially committed to Memphis. The appeal of the SEC got to him, though, and he flipped his commitment to Missouri just days after taking an official visit in early-2018.

Badie was an impact player from Day 1 for the Tigers, both as an all-purpose back and returner, and was named to the SEC All-Freshman team. As a sophomore, Badie led Missouri with 928 all-purpose yards and finished second on the team in receiving yards. Playing behind Larry Rountree, Badie’s junior campaign lacked volume, but his efficiency took a major step forward and paved the way for him to take over as the team’s RB1. He went on to break Missouri’s 22-year single-season rushing record with 1,612 yards as a senior while averaging 6.0 yards per attempt and hauling in 54 receptions. Badie was a unanimous first-team selection for the AP All-SEC team and a second-team All-American selection. Some of his top moments as a Tiger included five 200+ yard games and leading Missouri to an overtime win against Florida on Senior Day in 2021.

The Senior Bowl and NFL Scouting Combine were huge for Badie. I suspect his Pro Day will be beneficial for his stock as well. In Mobile, Badie was explosive and showed why he would be an asset for NFL and dynasty teams alike. Many scouts touted him as the best back in practice all week. He showed off his vision and made a case for being a top-tier receiving back in this class.

Badie has been an underdog his entire career and was relatively overlooked going into the 2021 season but thrashing the SEC will help anyone’s stock. He did just that and has positioned himself as an early-Day 3 selection in April. In dynasty rookie drafts, expect Badie to be lumped into a large group of talented, late-round running backs, including Jerome Ford, Dameon Pierce, and James Cook. As dynamic as this group may be, they all have their own set of question marks, and Badie is no exception. Let’s explore those, along with what makes him such a unique talent, in this rookie profile.

Pass catching is something that Badie does well, and that ability is highlighted often in his film. Especially in the Kentucky game in which he had ten receptions for 88 yards. Missouri frequently used him as a receiver last fall, and he made the most of his opportunities, totaling 54 receptions in his senior year. He was mostly utilized as a screen option, but the skillset is there for him to become a more diverse receiver in the NFL. The only SEC running backs to total more receiving yards in 2021 were Jo’quavious Marks and Dillon Johnson, both of whom did so in Mike Leach’s air raid offense.

Badie is very advanced with his footwork and uses this to manipulate defenders and create space. He has quick, agile feet and moves effortlessly in a crowd. His quickness allows him to easily change paths and side-step defenders. Badie routinely makes defense look silly with his shiftiness and NFL-caliber vision.

While other backs with the same physical profile were coming up slow in the 40-yard dash, Badie logged an official 4.45 at the Combine. A home run threat from anywhere on the field, Badie is so dangerous with the ball in his hands. His acceleration and explosiveness make him a big-play machine. In his final season at Missouri, Badie had 46 runs of at least ten yards and had 30+ yard runs in six of his 12 games.

Despite being considered a smaller back, Badie is as tough of a runner as they come. He is a very controlled rusher and uses his strength to fight through arm tackles. He earns extra yards on seemingly every play. Badie led the SEC by a wide margin in yards after contact (916) in 2021.

Tyler Badie led the SEC with 1,604 rushing yards and 916 yards after contact in 2021 🐯pic.twitter.com/wBoHQgdQI4

An obvious concern with Badie’s profile is his size. At 5’8”, you would have liked to see him weigh-in above 200 lbs. His verified weight of 197 gets him very close to that mark, but the odds of fantasy success take a hit with his measurements and projected draft capital. Still, Badie excels in all the areas that you would expect a smaller back to excel in. He is a difference-maker as a receiver and he demonstrated a willingness to pass block. The latter being an underrated and vastly improved part of his game.

You should not expect bell-cow volume from Badie at the next level. He lacks the elite power to produce in that way. There are plenty of ways he can win and provide fantasy value, but I do not anticipate him being a 300-touch player like he was at Missouri.

Badie isn’t quite as decisive as I would like him to be, especially in crowded areas. He tends to linger too long in the backfield while trying to create. This may be a bit nitpicky, but still worth noting.

Badie has an early-Day 3 grade for me as my RB11 in the class. He certainly has a place in today’s NFL as a top-tier receiving back and zone-based runner. I project him to be a PPR asset for dynasty managers, similar to what we have seen from Nyheim Hines over the past several seasons. Badie is still one of the best-kept secrets in the community despite having an impressive pre-draft circuit. I wonder how much of that is due to analysts scouting the helmet rather than the player. Tyler Badie appears to be everything that we wanted Kyren Williams to be. He was the first running back since Jonathan Taylor to record five 200+ yard rushing performances in a single season, and he did so against SEC competition. If a player at LSU or Georgia did that, I suspect there would be more hype in fantasy circles.

Based on current Superflex rookie mock drafts, Badie will be one of the best value running backs available in the mid-late third round based on current Superflex rookie mock drafts. Draft capital and landing spot will impact ADP greatly. Selecting Badie a round later than running backs like James Cook, and Jerome Ford is excellent value. You will be drafting an impact PPR threat with massive big play ability. Badie will be a high-priority late-round target in all of my drafts.

Visit the Dynasty Nerds Prospect Film Room today for access to a full library of game tape of Tyler Badie and dozens of other college football prospects.

Become a member of the #NerdHerd and gain access to the Prospect Film Room, members-only podcasts, Nerd Scores, and more for just $4.99 per month. Make sure you use promo code FF_Hulsey to take 15% off your membership cost.

Setting the Standard: 2022 Rookie Tiers for standard scoring
Draft Nerds: Who is the favorite for the top pick in the 2022 NFL Draft?
Black Friday Sale