Add Tyler Goodson to the list of running backs in the NFL Draft. However, let him fall to you in the ater rounds in a rookie draft. 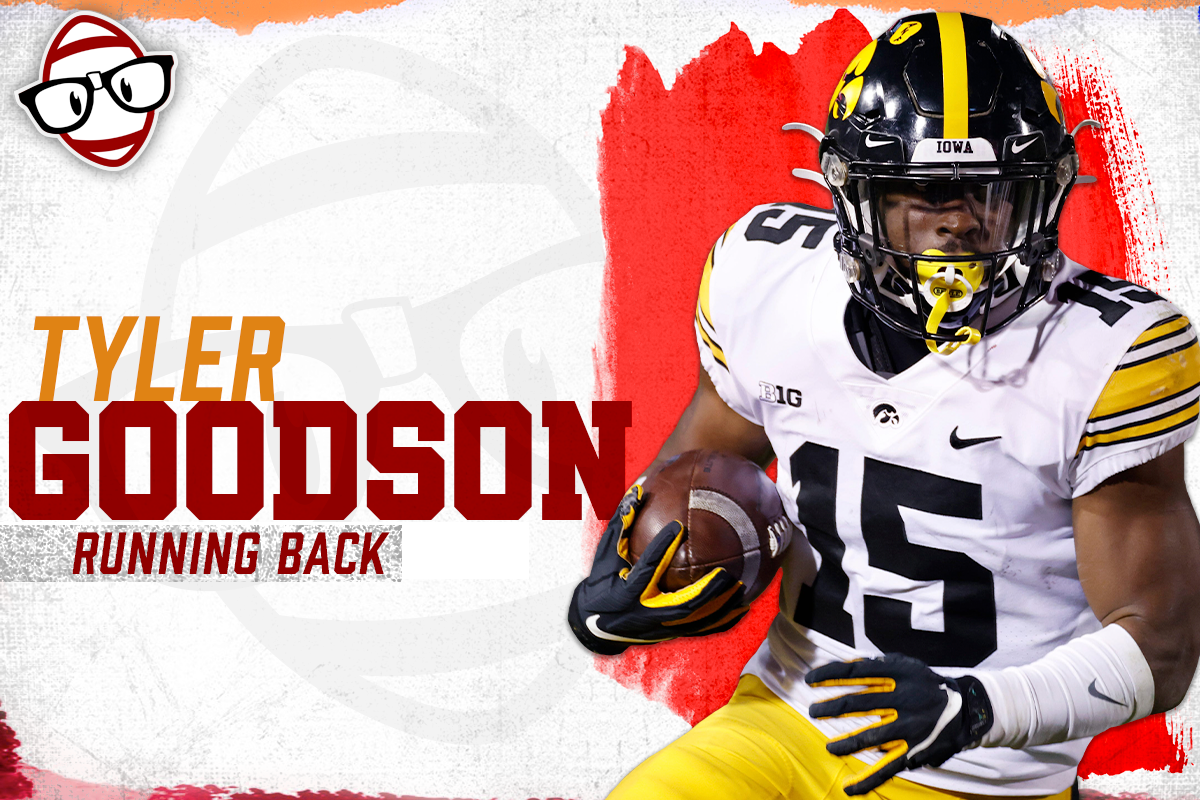 Tyler Goodson is a high effort player who lacks any specific elite trait. His ceiling in the NFL is likely a practice squad or special teams units. There isn’t a thing wrong with that; it limits what a dynasty manager should expect of him.

Goodson received an offer from more than two dozen programs before accepting the scholarship offer from Iowa. He was given a 3 – star scout grade and was the 37th ranked player at the RB position in the country per 247 Sports Composite.

Goodson declared for the NFL Draft after his junior season, which was his most successful collegiate campaign. I’m sure that running behind Tyler Linderbaum at the center position, who’s likely to be drafted on Day 1, didn’t hurt either.

The biggest outputs of Goodson’s 2021 season were against the below four teams:

It seems that Goodson was feasting on bad defenses. That’s great for fantasy football, but it doesn’t mean that the player has a high ceiling.

Goodson could serve as depth on a team that employs a zone-blocking scheme, where he can make a cut and run downhill. He is at his personal best when he can get the ball and go. The Kent State Defense was pretty pathetic through the afternoon in this game. I would have liked to see him switch the ball to his left arm, Goodson wound up taking it the distance on the play here, but he could have left himself open to fumbling on the play. I know I am nitpicking, but you want to see better situational awareness.

Goodson runs right behind Linderbaum on this play and picks up nine yards. Man, I loved watching Linderbaum. He could have taken that defender to the team bus if he wanted to. Goodson followed both him and his fullback on the play. I would have liked to see him bounce it outside a bit earlier. However, nine yards is a very good gain on the ground.

You would be best served to leave Goodson on your league’s waiver wire. Depending on where he lands in the NFL Draft or as a free agent, he’ll likely be worth the occasional stash if there’s an injury. However, he’s not a worthy long-term hold even on a deep league roster. Unless you have a team starved for RBs, it never hurts to add a player like Goodson to your bench. At least until you get through training camp, see if any potential injuries have hurt your depth.

To stick on a roster, Goodson will need to get in the special team’s coach’s hip pocket. The straight-line speed simply won’t be enough to carve out a role on an offense. He’s also not a very explosive athlete, and he’s not going to get more than what’s blocked upfront by an offensive line. I think that the offensive line of Iowa made Goodson look a bit better than he is as a player. If you look at his stats from his Junior season, over 50% of his stats came against four teams. You can only play who’s in front of you, but his stats predictably nose-dived when he played against stiffer competition. That, to me, screams backup RB at best for him as far as an NFL roster goes.