Can Zamir White be the next great Georgia back? 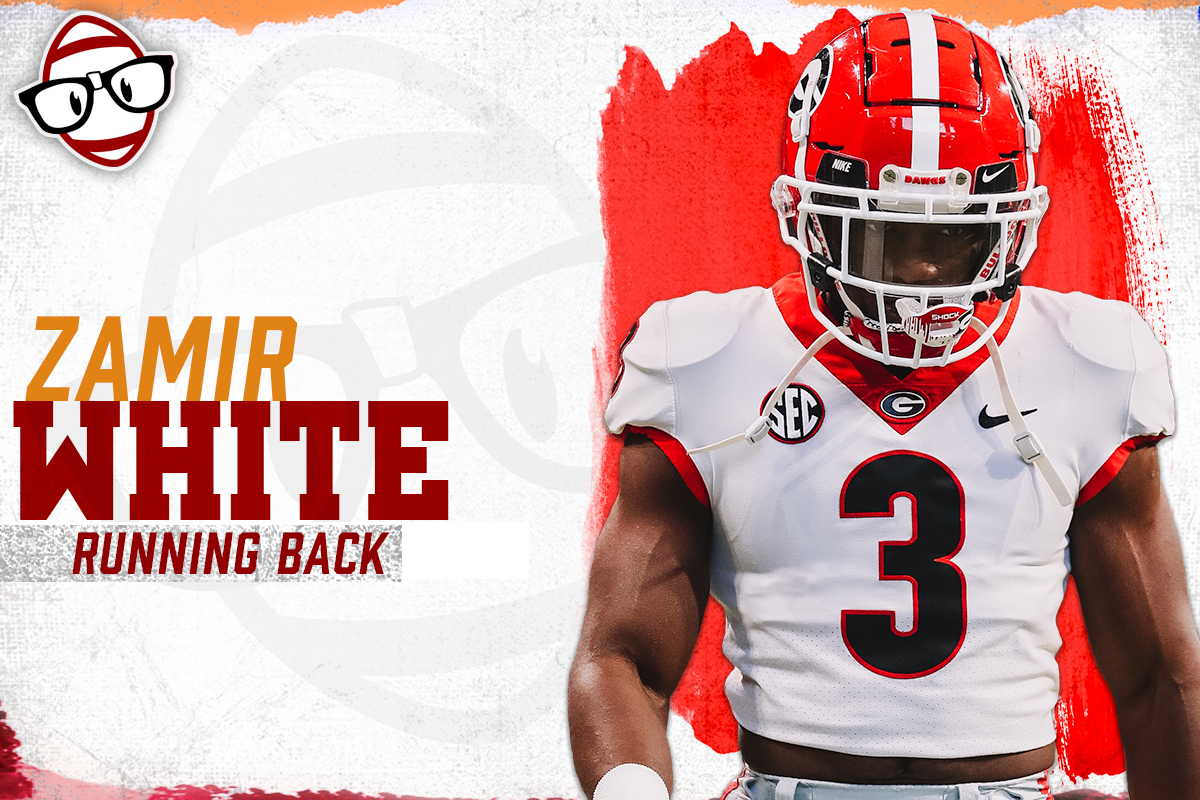 The 2022 RB class has a few clear studs at the top and then a wide jumble of flawed profiles jockeying for draft capital. Late breakouts, undersized producers, solid backs that haven’t convinced us they’re great, all guys with some nice stretches of play on tape but a minefield of analytical black marks.

White is in the thick of this group, a redshirt junior with pedigree but long injury history and limited production. Can he find his way into the top five backs in the draft?

White was the number one overall back in his class and a top-10 overall prospect. Though he committed early to Georgia, White suffered a significant setback with a left ACL tear in his senior year at Scotland County. He successfully rehabbed from the injury only to tear his right ACL in a scrimmage before ever seeing game action for the Bulldogs.

White finally returned to the field in August 2019, seeing a decent amount of game action behind De’Andre Swift as a redshirt freshman.

Devy players and Georgia fans alike thought White was primed for an explosion in 2020 as the clear lead back for the Bulldogs. He indeed seized the lead role, out-carrying fellow ’22 draft candidate James Cook 144-45, but his 779-yard, 11 TD output underwhelmed. That could be in part due to a generally anemic Georgia offense.

This past year, White improved his total raw production though his per-game numbers were lower. Cook drew nearer to an even timeshare and even outgained White in total yards from scrimmage.

Despite these red flags, White has certainly put enough on film to attract attention from GMs and draftniks.

As I’ve alluded, White is far from crushing most of the metrics I care about for running backs.

His raw production is fine, but nothing to write home about. His best-season scrimmage yards of 894 are barely in this class’s top-100 running back prospects. White’s best season of 11 TDs is top-50. His Dominator of .267 is top-60, but I don’t care much about DOM, anyway.

Yards Per Team Play (AYPTP.Best) is a biggie for me. White’s 1.25 is 93rd in this class. In terms of recent draftees, he’s closer to Chris Evans and DeeJay Dallas than he is to my “great prospect” tier. The lowest hits I have are Cam Akers and De’Andre Swift, both over 1.75. Rhamondre Stevenson at 1.39 is the only recent back with a poor YPTP that’s shown himself likely to succeed, to me.

I also like using Expected Points Added (Av.EPA) for RBs. It’s not a perfect stat, but it sometimes helps me pick up good players that would otherwise fall in my model. White’s 14.2 Av.EPA is near Akers’ number of 15.8, but it’s not a good data point. Most successful NFL backs have 20+, and great backs tend to have 40+.

The other data points I care about for RB prospects are Broken Tackles and Yards After Contact / Att. Indeed the 215-lb power back at least excels here, here? His 31 broken tackles (best-season) aren’t terrible, but it’s not good. I don’t have a hit from the past two classes with less than 40. His 3.6 Y/CO/ATT is about the same; 20th in his class and well below the range I have for hits.

Sorry, fans. There’s nothing to like in his data profile. Maybe the tape is better?

White does have some nice traits, for sure. His power is no joke, and it shows up over and over again.

Obviously, it’s not sure raw power- White knows to keep his feet moving, and he’s got the will to push and finish plays. You’ll see it again on this next play:

He may not be juking guys out of their shorts, but he certainly fights for extra yards and gets them.

He’s got pretty good straight-line speed when he gets free, and he’s going to run through arm tackles every time.

White also has quite good vision at the first level and patience to go with it:

I love that he waits and waits for the hole, then plants and explodes, though.

You’re not going to see a ton of this, but he can catch the ball out of the backfield:

From the reps, I’ve seen White seems adequate as a pass-catcher, neither liability nor elite. When asked to, he can perform in the passing game, and his pass blocking can be decent.

Look, I want to like White – I really do. I love a comeback story as much as the next guy. I want to plug-and-play him as the next dominant Georgia back. I’d love to get him late in the second round of rookie drafts and be a steal.

The reality is that I have to trust my numbers, and the numbers say that White will need a heck of a lot of things to break his way for him to be a significant fantasy asset. There’s not a single elite metric I can point to as a ray of hope.

This matches up with what I see on film- a very good college running back that will get drafted in the NFL. I don’t see a guy I want to burn significant draft capital on. I’ll be interested if he gets day two capital, but I will likely catch myself fading him relative to consensus even then. At a specific cost, of course, I’m in, and he’s going to be a running back in the NFL.

He’s going to be a committee back, and he’s not going to be the pass-catcher on the committee. Depending on the landing spot, he may get the goalline work, which could give him some utility. But the reality is likely to be that he’ll need multiple injuries in front of him to land a sizable workload.

So, sure, third round, I’m in. But if his ADP is mid-second round, I’d likely prefer to take Rachaad White, Kyren Williams, or a WR like Skyy Moore instead.

The original post here was written in January and went live Feb. 3rd.

White has been a post-combine riser in NFL circles; his 4.4 40 at 215 lbs is obviously excellent. This matches up with his tape, but also begs the question of why he wasn’t able to do more with his workload in college (when other Georgia committee backs like Chubb and Swift have still ranked highly in my model).

The real difference for me now is that he’s now being consistently mocked as a late 3rd round pick instead of a day-3 guy, meaning he’s likely to get an opportunity sooner rather than later. I don’t think he’s ever going to be a world-beater but you all know that an athletic running back with opportunity is well worth a look in the mid-2nd of rookie drafts.