Bobby Bishop (@imbobbybish) profiles ZaQuandre White, a deep sleeper running back of the 2022 draft class. White flashed a change of pace and big play ability in his senior year at South Carolina. 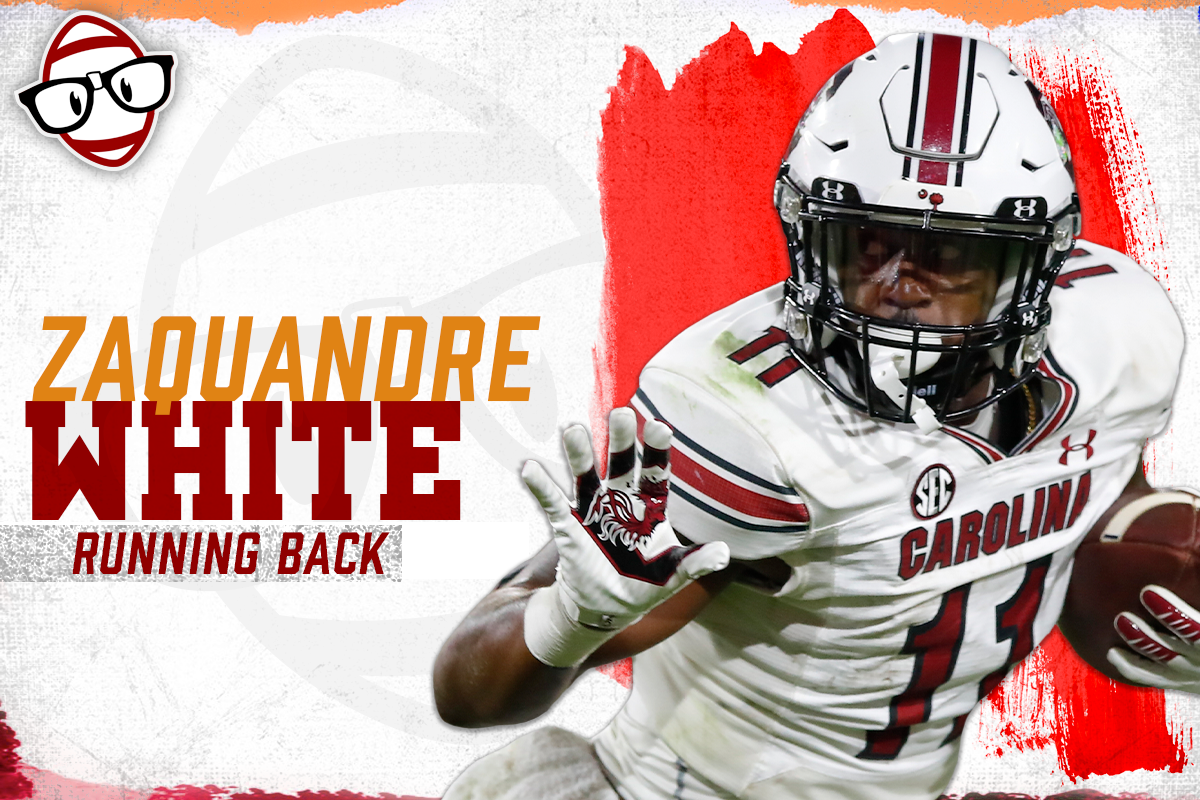 ZaQuandre White is a deep sleeper in this upcoming draft class. He has minimal career carries and flashes elite athleticism.

White was a four-star prospect out of North Fort Myers High School in Florida. He was ranked as the seventh-best RB recruit in the country. White committed to Florida State, where he struggled to take off. He was redshirted as a freshman and then utilized as an outside linebacker as a sophomore. White, however, wanted to play RB, so he bet on himself. White enrolled at Iowa Western Community College, where he rushed for 876 yards and ten touchdowns in just eight games. 247sports rated White as the number one JUCO running back, and he committed to the University of South Carolina to become a Gamecock.

White was buried on the depth chart in 2020, and Kevin Harris got the majority of the Gamecocks’ carries to lead the SEC in rushing that regular season. White still made an impact, becoming known as a great teammate that brought a ton of energy while playing offense, defense, and special teams.

In 2021, White finally broke out. He started strong against Eastern Illinois, turning 12 carries into 128 yards and a touchdown. He also had four receptions for 39 yards and a touchdown. Against Florida, he had 13 carries for 111 yards. Against Auburn, White had 16 carries for 99 yards. White was second on the Gamecocks in rushing yards behind Harris, even though Harris had almost twice as many carries. White decided to opt-out of the Duke Mayo Bowl and declared for the 2022 NFL Draft.

Unfortunately, the pre-draft process has not been kind to White. An ankle injury forced him out of the Senior Bowl practices. Subsequently, the recovery forced him to not perform drills at the combine and potentially hurt his pro day numbers. White, however, is still hopeful to be selected in the 2022 NFL draft.

White had 241 carries throughout his college career. This showcases limited wear and tear on his body.

White forced 30 missed tackles in 2021 with only 107 touches, averaging more than a forced missed tackle every four touches.

PFF graded ZaQuandre White as the best offensive player on the Gamecocks in 2021 with a score of 82.5

White bursts through an opening in this clip and take it 63 yards to the house. White only ran an unofficial 4.63 at his pro day, but he was coming off an ankle injury. He ran a 4.51 at The Opening in high school, which seems much more accurate.

White catches the screen pass and immediately gets downfield. His cutback froze Smoke Monday in his path, and White was able to turn it into a big gain. White only caught 34 passes in his college career, but he certainly showed he could turn his receptions into yardage.

White isn’t the biggest back, but he does a great job of keeping his legs churning and fighting for extra yards. The former LB shows it by never shying away from contact.

White is likely to either be a Day 3 pick or an undrafted free agent. Either way, he is a great candidate for a late-round rookie draft selection and a spot on your taxi squad. White is likely to stick on an NFL team as a third-string running back and a return specialist. If injuries strike his team and he gets opportunities, White will seize them.