Dameon Pierce has solid tape but weak production. What should you do Pierce in rookie drafts this fall? 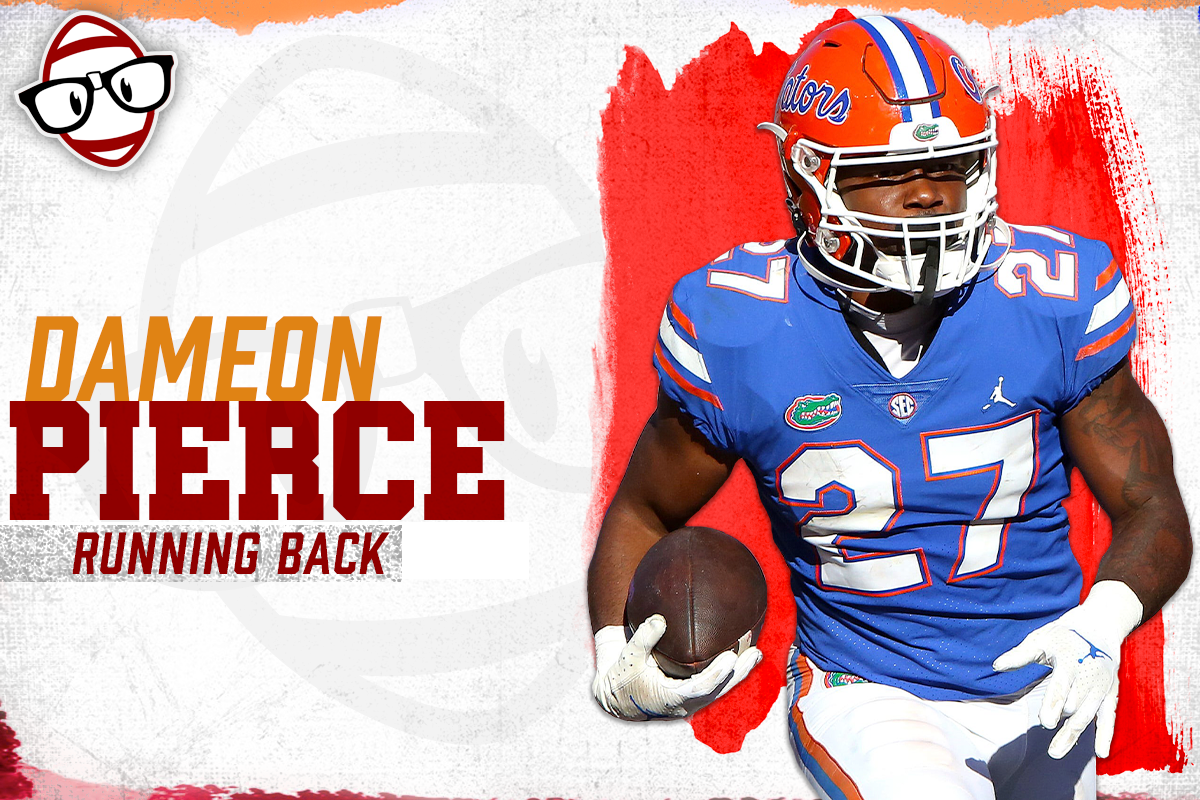 Dameon Pierce is a name that’s starting to draw some hype in draft circles, touted by film grinders for his physical, smart running, and PFF rated him as the best running back in CFB this year.

Should you be buying the buzz or letting Pierce pass you by? Let’s find out.

Pierce hails from Bainbridge High School in Georgia, where he ran for over 2,100 yards and 32 TDs his senior year. He was ranked as the eighth back in his class and recruited to Florida, where he enrolled early.

Pierce got on the field right away, putting up 444 combined yards and scoring twice, all while playing behind NFL backs Lamical Perine and Jordan Scarlett (and sharing a backfield with Kadarious Toney). He regressed in his second year before starting as a junior, though he still had only 659 total yards.

Obviously, Pierce’s raw production is underwhelming at best, but he does have decent efficiency numbers.

In terms of the metrics I find most useful for scouting RBs:

Pierce has an Average EPA of 17.64. It’s top-35 in the class. EPA isn’t always a great standalone metric, but I like including it in profiles as it sometimes highlights the talent that other metrics are missing. As a benchmark, Breece Hall is a top 5 EPA producer in this class, and Isaiah Spiller is top 12.

I care about Adjusted Yards Per Team Play (AYPTP) quite a bit; it’s one of the best quantifications of a back’s role in an offense. Pierce hits a lowly 1.12 AYPTP, leaving him with the 106th-best number in the class. Ouch!

In total, his analytic profile isn’t getting him on my draft board.

I hadn’t studied Pierce much before this profile, but, even at first pass, his film looks a good bit better than his metrics due. All these clips are from Florida vs. Alabama 2021- I like watching a prospect play against future NFL talent, as it tells us a lot more than games where he decimated a JV roster.

As a quick note, all this film and much more are available in the Dynasty Nerds Film Room. It’s a small amount of money to join (which gets filmmakers like me paid), but it’s the best money a dynasty player can spend on content.

The first thing that jumped out at me was that Pierce played split out wide quite a bit, though he never saw much passing volume. He runs excellent routes, especially for a bigger back.

Then check this out route:

Sometimes a lack of passing-game production says more about the OC or QB than it does the back, and it seems like that’s the case here. Pierce’s 11.4 YPR backs up that idea. For running backs, pass-catching efficiency is more critical than is volume.

Pierce has many tools to win his conflicts on the fields, and he can chain them together smoothly. This isn’t a huge play here, but it’s impressive nonetheless:

Pierce feints to the inside to freeze the DE and get around him. He beats the second man with a jumpcut and his off-hand and nearly powers through the third defender into the end zone. It’s good work.

I’m not sure what type of long speed Pierce will show at the combine- ok, I would think- but he’s definitely got burst for days:

Pierce gets up to speed quickly enough to catch the edge and get around the linebacker. Again, these are NFL guys he’s playing against.

This touchdown run later in the game showed off some speed as well:

Beating the safety in a footrace is impressive, but Pierce also shows off great vision. His first read is to the guard behind the pull block, but he sees the LB with leverage and wisely bounces outside for the score. He doesn’t tip his hand to the DB either, taking an angle that could go either way before cutting inside at the last moment. It’s a really nice run.

Pierce has excellent fight, too, finishing plays like this TD run:

The extra effort get his team the points (in a close game against a top-2 team in CFB).

Finally, Pierce can block. I care because this helps him get on the field for 3rd downs and 2-minute drills.

The DE gets the tackle with an extraordinary second effort, but there’s not a lot of backs that are going to stand up an end 1-on-1 like that.

But don’t just take my word for it about Pierce. While I was in the middle of writing this, I got into a Twitter thread with Lance Zierlein from NFL.com, and he dropped this reel on me:

Pierce is one of the trickiest evals in the class.

Typically, the tape matches up when prospects have terrible analytical profiles. For Pierce, it does not. His poor production may be more an inditement of the coaching staff and offense than his actual skill. Broken Tackles and Y/CO/ATT should be fairly offense-agnostic. Still, some backs win in other ways than by shaking off defenders (and Broken Tackles is a counting stat- it’s tough to accumulate without getting snaps). And, particularly on that Zierlein reel, you can see Pierce shed plenty of tackles.

So what to do with Pierce? I think we’re going to see some ranking him as highly as their top five backs while others have him in the teens, depending on their scouting process.

For me, I’m certainly drafting all the guys for whom both analytics and tape align before I’m looking at guys that only succeed at one or the other. That means I’m taking Pierce at the very least behind Hall, Spiller, Walker, White, and probably Allgeier and Williams. I’ll start considering Pierce with the group right after that. Players with upside and nice aspects to their game but flaws in their profiles, like McCormick, Badie, Knight, Ingram, Brown, etc. So he’s somewhere around RB6-RB10 for me, pre-draft, pre-combine. Good or bad draft capital or testing could boost or kill any of these guys, of course.

Where should you take him in your rookie drafts? If you’re really in love with his tape, it’s ok to grab Pierce as soon as the mid-to-late second. I think in most drafts, he’ll fall into the third (unless he gets day two draft capital, then all bets are off). This is precisely the type of player I want in the middle rounds if he’s there. The running backs who may not be day one starters, but that can stick to a roster. Then possibly win a committee spot and eventually find their way onto the field during the season as attrition sets in.

What are your thoughts on Pierce? Let me know in the comments or on Twitter at @ekballer

Happy scouting, and may the drafts ever fall in your favor!