It is time to start looking to the 2023 rookie draft. The Dynasty Nerds team is here with 1QB Rookie Mock Draft 1.0. 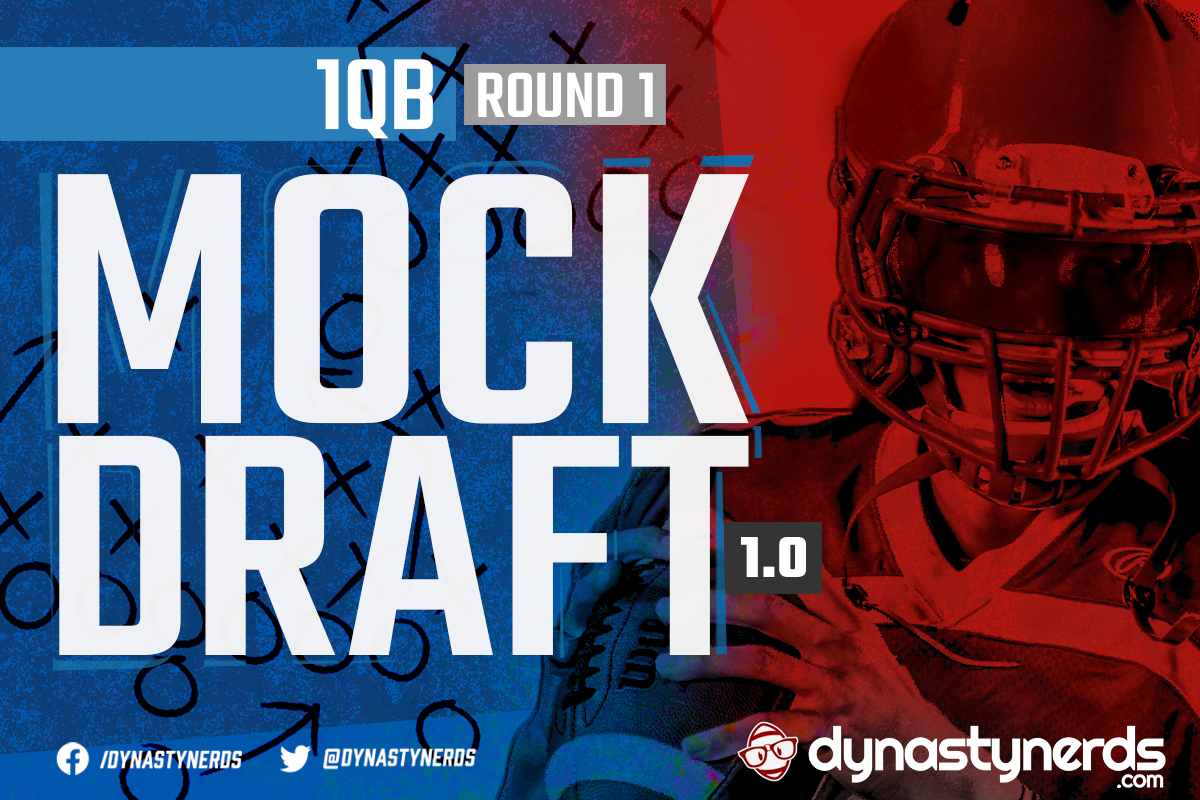 We have reached the halfway point of the fantasy football points scoring season. Dynasty managers have a clear read on their teams now. Whether you are looking at a title run or looking at next April’s NFL Draft, it is not to early to take a look at next seasons crop of rookies.

Bijan is the clear 1.01 in 1QB drafts. Bijan is one of the most complete running back prospects we have seen in years. There are virtually no holes in his game; he can do it all. Taking Bijan first feels like quite the bargain because I only have to use 1.01 to get him. He should cost a lot more than that, given that he is already considered a top dynasty running back and hasn’t even played a down in the NFL. Those lucky enough to snag the 1.01 in 2023 have won the draft lottery. – @_jasonstein

The 2023 class is loaded at running back, and the RB2 spot behind Bijan Robinson feels like a wide-open competition. Jahmyr Gibbs has size concerns that Sean Tucker and Zach Evans don’t, but his game seems the most built for the modern-day NFL. He is an elite pass-catching back with massive ppr upside for your dynasty roster. And he’s an explosive runner with sweet feet and easy acceleration. He’s been showing out at the highest level the last few weeks, and at least for now, he is the guy I’d take at 1.02 in a 1QB mock draft. – @Devy2DynastyFR

He had a breakout year with Kenny Pickett and is now playing with another superstar transfer in quarterback Caleb Williams. Addison looks like the modern NFL receiver. He is slim in stature but can get open all over the field. Some draft analysts are comping him to Stefon Diggs. This is a no-brainer with both the top running backs off the board. He is my WR1 and an easy selection with the third pick.- @DanT_NFL

Capable of game-breaking runs, few players in the 2023 class are as fun to watch as Tucker. A champion 100m and 200m sprinter in high school, Tucker has excellent speed and linear burst and runs tougher than his undersized frame would indicate. However, the most exciting development for the Orangeman running back is that he has already surpassed his mark of 20 catches from 2021 in six games in 2022. A bell-cow profile is emerging, and Tucker deserves top-3 running back status in a loaded class. – @DynastyOasis

Evans is easily my RB3 in this draft class, so to get him as the RB4 is exciting. He is a strong running back that has a nose for the endzone. Zach is a bit of a risky pick due to some concerns over his mental makeup, but the talent is undeniable. He has 605 yards and 7 touchdowns on only 100 touches. He’s ready for the NFL. – @DarthDbacks

Getting JSN at 1.06 in a 1QB draft is a steal. He is highly regarded as the WR1 in the 2023 class. It would take an extreme riser for him to lose this spot. Route running, great hands, and a high football IQ make JSN an amazing wide receiver. Outproducing Garrett Wilson and Chris Olave last year at tOSU gives me reason to believe that his transition to the NFL will go smoothly. JSN isn’t jumping off the page this season due to a lingering hamstring injury, but don’t let that scare you away from the WR1. – @FF_TJHernandez

Johnston is one of the most physically gifted prospects in the 2023 draft class. His play strength, ball tracking, and YAC ability are rare. I understand the production concerns, but he has produced in a way you would expect relative to his offense. He is squarely in the 2023 WR1 conversation. – @FF_Hulsey

Currently, 1.07 and 1.08 feel like the top of a new tier in 1QB. They’re awkward spots to draft from, and I don’t have great feelings about many of the players here as I do with the top six. However, I like the running backs in this class much moreso than many of the second-tier wide receivers, and Tank is a talented player. I think he’s a lock to be a day-two pick in the NFL Draft, and given the dearth of talent around him at Auburn, I think his best football is ahead of him. – @TheSmingDynasty

Boutte hasn’t performed very well thus far for LSU, but that’s not just Boutte’s fault. The talent is evident, and NFL evaluators should be able to recognize the player he is. I have some concerns about his maturity, but the upside is too great to let him slide further. Boutte is smooth, explosive, and fits the mold of the modern-day NFL alpha receiver. – @fakefootballs

Mama, there goes that man!!! Blake Corum said Edwards I can do that too! A big run to extend their lead!

I feel good getting Blake Corum at 1.10. I think he could sneak into the top 5 running back conversation if he stays healthy this year. He is a smaller back but runs tough and has breakaway speed. I think he is underrated and could move up boards come next April. – @hayeb3

Downs in the late first is why we are excited about the 2023 class. He checks the boxes under college dominator rating, early breakout, and early declare. He has speed, hands, and versatility. I see him being a combine and/or post-draft riser. He has the potential to be not only a deep threat in the NFL but a high-volume ppr machine as well. He is the most likely wide receiver in this class to thrive off of manufactured touches and carries out of the backfield. As electric as he is with the ball, he can score from anywhere. – @JohnnyBGoodeFF

Charbonnet was in the same conversation as an every down back due to his size and speed. What’s interesting about Charbonnet is that he has the hands to be receiving option out of the backfield. With the right draft capital, Charbonnet should be an effective running back at the next level. – @WooLee_FFB

That closes out Round 1. Who was a reach? Who was a value? Let us know what you think. Round 2 will be out later this week. We also have a 1QB Mock Draft coming.