It is time to start looking to the 2023 rookie draft. The Dynasty Nerds team is here with 1QB Rookie Mock Draft 2.0. 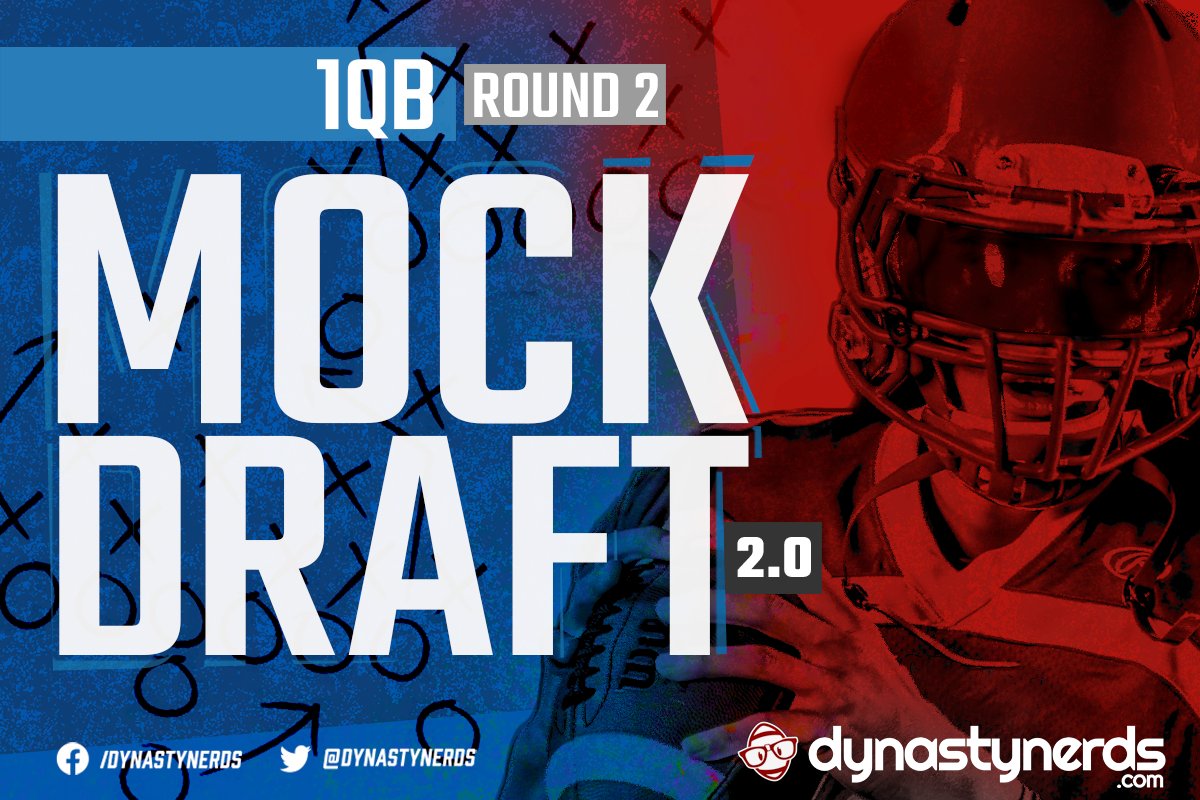 The Dynasty Nerds team leans into Round 2 of our 1QB Rookie Mock Draft 2.0. We had a shake-up in the Superflex draft, but does this draft hold form to version 1.0? Later in the round, some non-Power 5 players show up. Round 1 is HERE.

With the departure of Hassan Haskins, senior Blake “The Touchdown Snake” Corum has run away with the starting job at the University of Michigan. The man is a touchdown machine; he has amassed 18 through the college football season. Like Kenneth Walker last season, a breakout year has propelled Corum into the Heismann conversation. According to DraftKings sportsbook, he is the third most likely player to win it this year. He will have early Day 2 draft capital and should be shooting up rookie draft boards. –@DanT_NFL

A late riser, Kendre Miller has excellent speed and cutting ability for a man his size. In 2021, he was in a near 50/50 split with Zach Evans for touches at TCU, and he was actually more efficient with his opportunities. In fact, Miller sports an excellent 6.85 ypc on 321 carries for his college career. With Evans’ transferring out of the picture, Miller has been dominant! Posting nearly 1,300 total yards and 14 touchdowns, Miller has put himself in contention for Day 2 draft capital. I hope he gets it, I love him as a prospect. – @Devy2DynastyFR

TCU running back Kendre Miller is rising up draft boards this season. Has gone over the century mark 7 times this season out of 10 games. Explosive player. Here is his game vs Texas. Every carry, every catch. Enjoy. 📈🚀 pic.twitter.com/YEZc4roEiO

Stroud is a rare blend of size, mobility, and athleticism. I see a very real possibility that he is the first quarterback off the board. While I love the depth at running back and wide receiver this draft, I find it hard to pass up on elite talent at quarterback in the second round in rookie drafts. He’s not a perfect prospect but he looks every bit the part of a franchise quarterback – @JohnnyBGoodeFF

Cedric has impressed and surpassed my expectations coming into the year. While he’s dealt with some injuries, he’s still put up some impressive stats while showing strong hands and ability to consitently make impact plays. I feel like he isn’t getting near enough attention compared to other wide receivers, so I’ll gladly take him over some wild card running backs. – @DarthDbacks

Chase Brown followed up the longest sophomore year ever with back-to-back 1000-yard seasons. Brown brings good size, speed, and pass catching ability to the field. A good receiver, Brown caught 27 passes this season on top of rushing for over 1600 yards. Brown brings an Austin Ekeler-lite skill set to the table. – @Culture_Coach

I remember watching Mayer as a starting freshman and thinking he will be a beast. He has led the Fighting Irish all three seasons in receptions, averaging 69 catches for 825 yards and eight scores over the past two years. Targeting tight ends from Notre Dame like Cole Kmet, and Penn State a la Pat Freiermuth after the opening round of fantasy drafts will help shore up this position for years and become a potential difference maker. – @sportsguyscott

Flowers is a bit undersized to be a true alpha receiver, but his talent in the slot could prove to be a great advantage for fantasy owners. A senior season with 78 receptions, 1,077 receiving yards, and 12 receiving touchdowns is the kind of production that gets you excited for a draft prospect. – @timbmartens

Achane just dropped 38-215-2 against LSU and looked great doing so. There are size concerns, but getting him mid-late second round in a 1QB draft is a steal. I think he has made massive strides as a runner over the past several months. He has developed patience and the ability to work through contact. NFL teams are going to find his Olympic-speed and game breaking ability too appealing to pass up on. He could be one of the best complementary backs in football. – @FF_Hulsey

An elite producer at Houston, I think Dell will find his place in the NFL. “Tank” is a tad undersized at 165 lbs, but that hasn’t stopped him from putting up at least 1,300 yards and 12 touchdowns in each of the last two seasons. Very likely a slot receiver at the next level, Dell will make his money eating up receptions in the intermediate area of the field. You might be able to wait a few more picks before taking Dell off the board, but I couldn’t pass him up at this spot. – @FF_TJHernandez

Rashee Rice is a beast. At 6’3” and 203 pounds, he profiles as a true alpha wide receiver. And he’s played like it throughout his career at SMU. Rice has good acceleration and long speed to pair with his prototypical size. He’s excellent at the catch point, and frequently makes the first man miss to pick up yards after the catch. It’s always hard to judge these G5 prospects. Even when the tape looks really good, there’s always the caveat of it being against lesser competition. But if Rashee Rice gets Day 2 draft capital, I’m all in. – @Devy2DynastyFR

Rashee Rice is a contested-catch beast. He uses his size, body-control, explosiveness & flexibility to his advantage.

Can elevate & make highlight-reel grabs even in double-coverage while absorbing contact. Impressive hands, concentration & balance in those situations #NFLDraft pic.twitter.com/dXlAkd5TzO

Jalin Hyatt is absolutely not going to be available at 2.11 in rookie drafts. He’s going to be drafted in the top 64 picks- his combination of blazing speed and high-end production will not be passed on by 32 teams. He may not be a “complete receiver” but there’s plenty to like in his game, and upside for him to develop into a Marquise Brown-type player in the right offense.. – @ekballer

A profile that I rarely pass on, McIntosh is a wide receiver posing as a running back. A well-rounded athlete with a solid blend of power and evasiveness, Kenny’s profile as just a running back is good enough to stand independently. However, when combined with his pass-catching profile, McIntosh becomes the best back no one is talking about enough. With 35 receptions for 12+ yards per catch in his final season at Georgia, McIntosh has the credentials to be drafted as either running back or wide receiver. A couple of primetime games lie ahead for the Bulldogs, and I suspect this will be the lowest you see Kenny taken in the coming months. – @DynastyOasis

That closes out Round 1. We see a big Tennessee Volunteer presence in this round. Who was a reach? Who was a value? Will Nathaniel Dell be the next Hunter Renfrow? Let us know what you think.