It is time to start looking to the 2023 rookie draft. The Dynasty Nerds team is here with 1QB Rookie Mock Draft 3.0. 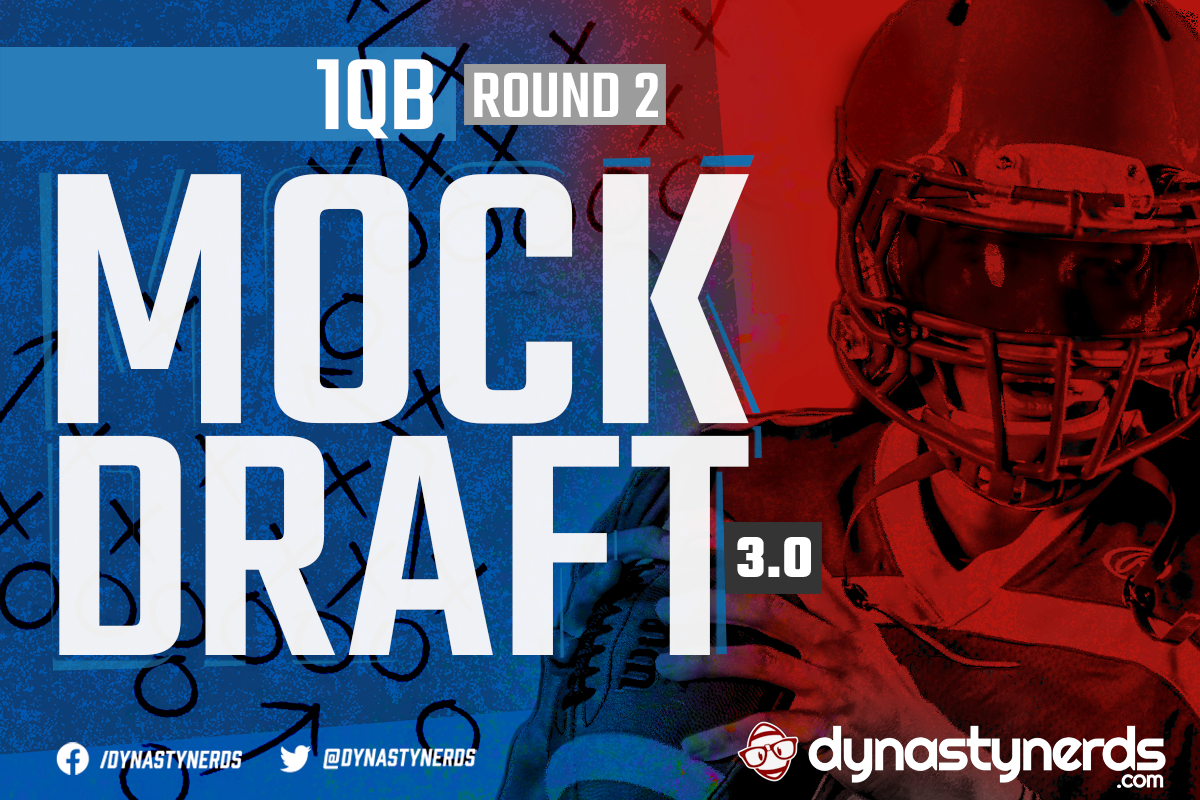 This wraps up the version 3.0 mock drafts. We have a new tight end make an appearance. The running back position depth is starting to show with a riser hitting Round 2. You can find Round 1 HERE.

With the first pick of the second round, I’m grabbing a wide receiver who could go in round one of the NFL draft. Hyatt is the 2022 Belitnikof winner as the best wide receiver in college football. He’s a speedster who takes the top off the defense. I’ll take that pedigree to start the second. – @Carl_VagleFF

I know this is a 1QB draft, but Young will be the starter from Day 1. He can make all the throws, possesses great running ability, and is a natural leader. There will be growing pains, but by his second season, he should be a QB1. – @Culture_Coach

Mayer is the proto-typical size of an elite tight-end option in the NFL. He was highly recruited from high school and had offers from almost every major college program. He is an early declaration for the NFL draft, and the scouting community is already projecting him to go in the first round. He put up over 800 yards and nine touchdowns on a predominantly run-first offense during his junior season. We love to see these things out of our fantasy tight ends. Michael Mayer has the size to stay on the field as a blocker but, more importantly, will be a difference-maker as a receiver. – @DanT_NFL

With over 1,500 total yards in 2022, Blake Corum was one of the quickest risers in the NFL Draft before an untimely knee injury late in the season. Should Corum declare and begin training camp healthy, this is a great place to snag him. A little shorter at 5’8″, Corum plays big with his physical running style. Not the most prominent receiving game threat, Corum projects to be a first and second down back. With the right landing spot, I think Corum can become an immediate force and is a great pick in the second round – @FF_TJHernandez

There’s some “prospect fatigue” at work here with Stroud. He’s been so good for so long that people have stopped appreciating it. He’s a very high-level prospect as a pocket passer with good functional mobility to help him escape and make plays off-script. He will hear his name called very early at the NFL draft. Even in 1QB leagues, the position is depleted right now. There are not that many guys you can trust. I’m happy to get Stroud this late. – @devy2dynastyFR

Rice broke onto the scene this season, going for 1,300 yards and 10 touchdowns, earning himself a spot at the Senior Bowl. He might be the best player in the class on contested catches, using his elite jumping ability, body control, and concentration to come down with some miraculous catches. Not only that, Rice has the acceleration and speed to pull away from defenders and make big plays after the catch. This combination of skills gives him plenty of upside at the next level and makes him a great target in the second round. – @kielpro88

Marvin Mims is a lighter receiver with elite speed. but he has a few things to hammer out before he can be successful at the next level. His route running is adequate for college but will not hold up in the NFL, and his physicality will likely limit his role. As it stands, he could be a boom-or-bust deep route option, ala DeSean Jackson. But if he can develop further, he could turn into a slot receiver with big play upside. In the second half of the second round, I’m okay chasing a flex play with upside. – @MonCalFF

Jalin Hyatt got most of the attention at Tennessee this season for a good reason. However, many seem to have forgotten about Tillman, last year’s stud. He is a big, jump ball artist whose game should fit well at the next level. Do yourself a favor when you scout this kid and watch his 2021 film. I promise you’ll like what you see. – @ReflipeWThenuz

Georgia running backs always seem to perform in the NFL, so I’m happy to take a chance on McIntosh this late in the second round. He’s a senior but only has 266 rushing attempts. That lack of usage will help him in the NFL with being healthy. This year, he’s had 136 rushes for 709 yards and 10 touchdowns. Plus, he’s shown his receiving ability with 37 receptions for 450 yards. He’s shaping up to be a complete back which is a steal this late in the draft. – @DarthDbacks

With my favorite draft sleeper getting sniped a pick ago, I’m happy to take my second favorite sleeper. A better athlete, precisely the same size, and more explosive after the catch, Flowers is Josh Downs at a full-round discount. The Boston College receiver has over 1,000 yards on 78 catches this season. His elite speed and explosion give him advantages on both vertical and horizontal patterns. While not a projected alpha at the next level, Flowers has game-breaking abilities and will be a perfect complement to a more traditional X receiver. – @DynastyOasis

Who leads this class in elusive rating? Surely it must be Bijan? Nope. Bijan’s backfield mate Johnson led all 2023 running backs in PFF’s elusive rating (for the past two years). He also averaged 7.5 ypc against top 25 teams this year and a tidy 9.1 ypc. Johnson has the chops to be a committee leader in the NFL, playing all three downs. – @ekballer

Kincaid was one of the most dominating tight ends in college after the Kuithe injury. He has the ability to take over a game as an advanced route runner and after the catch ability. He will be TE1 for many by the time the draft gets here. – @ffpeebleschamp

That wraps up Round 2. Who was a reach? Who was a value? Let us know what you think. You can find Round 1 HERE, and you can find the Superflex mock draft HERE.

Get more of the Dynasty Nerds!! Download the Bettor Sports Network free app and listen to Dynasty Nerds Live hosted by Dynasty Price Thursday night from 7pm to 9pm. When you download the app, you can call into the show with just a push of a button.