Today we’ll be reviewing QB Hendon Hooker for the NFL draft and your 2023 Dynasty draft! Find out what @SteveBradshawFF thinks of this prospect! 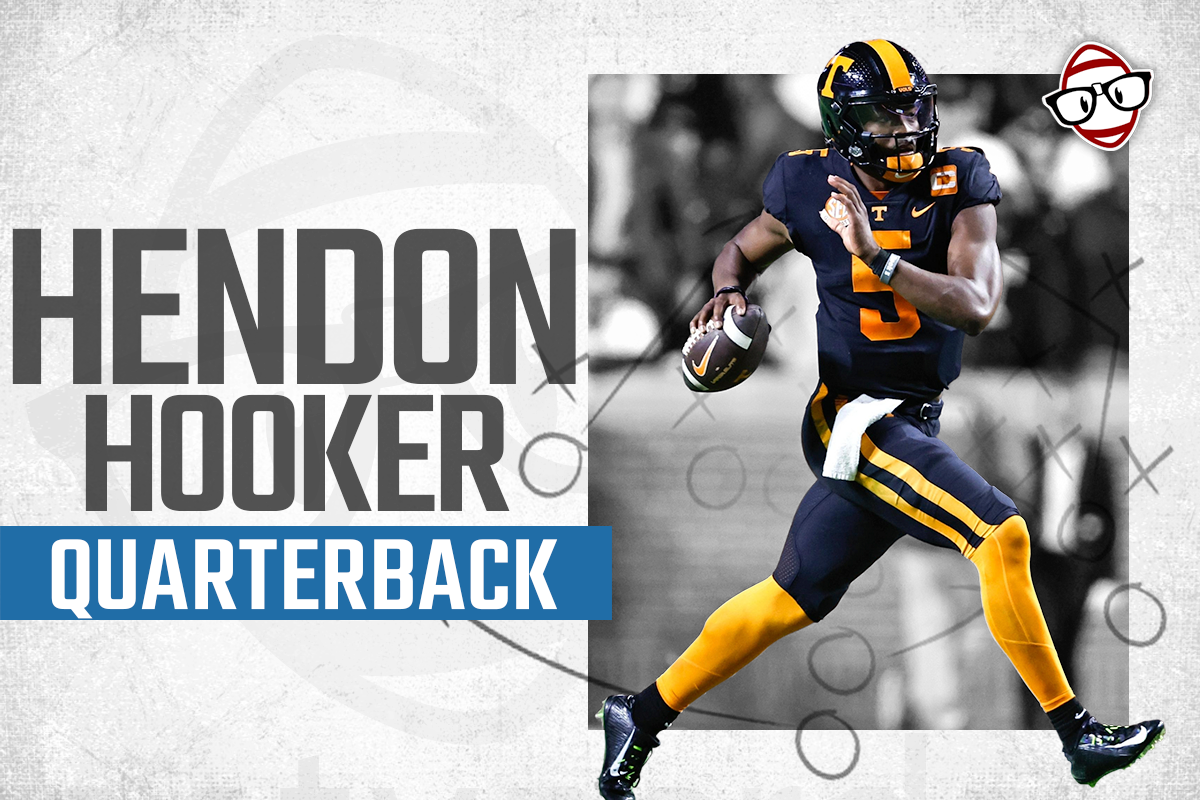 For my piece in the Dynasty Nerds 2023 rookie profile series, I’ll be covering Hendon Hooker out of Tennessee. He’s one of the most intriguing prospects in this class and has a ton of pros with a few cons. I expect Hooker to be a second to third-round NFL draft pick. The senior quarterback has good size and excellent accuracy at all levels of the field.

Hendon Hooker has one of the longest NCAA careers, staying six seasons. However, Hooker was a 4-star recruit put in horrible situations for a long time. Hooker first committed to Virginia Tech but redshirted his freshman year. Even after this, Hooker was never given a chance his next season, and a year of his eligibility was wasted.

In his sophomore year, Hooker played in 10 games and was solid but finished three games with less than 13 passes attempted. In his Junior year, Hooker was battling Covid throughout the year and only played in 8 games.

After a series of unfortunate events, Hooker transferred to Tennessee at 23 and had a breakout year on a mediocre 7-6 Tennessee team. Hooker stayed his last year of eligibility and was a Heisman candidate until he tore his ACL in Week 11. Even though Hooker’s age is a concern, he was outstanding immediately when put in a position to succeed.

Hooker has the ideal NFL quarterback build, measuring in at 6″ 4 218 lbs. Hooker looks very NFL-ready as some of his biggest strengths are reading defenses, using his eyes to create, leveraging his throws, and showing excellent pocket presence. Furthermore, Hooker is a great athlete who can get out of the pocket. Lastly, Hooker has solid arm strength to go along with fantastic accuracy at all levels.

Scouts have praised Hooker for his fundamentally sound mechanics more than almost any other quarterback in the draft. Hooker is ready to step into an NFL locker room because of his incredible maturity in reading defenses, especially pre-snap. Teammates have raved about Hooker’s leadership, and he has made it clear he’s ready to take the next step and work hard every day.

One of the biggest concerns for Hooker is his age. Hooker will start his rookie season at age 25, which raises concerns about whether his age was a prominent reason Hooker dominated in college. To make matters worse, Hooker suffered an ACL injury in his last season and is still recovering.

While Hooker has looked great at Tennessee, he tends to scramble out of the pocket when his first read is covered. The same type of success he had from this won’t translate in the NFL. Although Hooker is a great playmaker, his mechanics can become sloppy when he is out of pocket.

Additionally, Hooker could often throw to relatively wide-open receivers due to a great offensive scheme. Overall there are a few things Hooker needs to clean up mechanically, but his biggest red flags going into the NFL draft are his age and the recent ACL tear he suffered.

Looking at the play above, Hooker displays his fantastic athleticism as he gets out of the pocket and turns upfield for a nice gain. Hooker doesn’t have top-end speed, but he shows solid explosiveness here. Hooker correctly identifies that all his receivers are covered downfield and turns this into a big gain. Footage from the Nerds Prospect Film Room!

Hooker showcases his excellent playmaking ability in this play by escaping the pocket and delivering a strike for a first down. This shows Hooker’s best attributes, including his pocket presence, playmaking, and accuracy.

Hooker shows his pinpoint accuracy in this game against South Carolina. On this short post route, Hooker puts the ball right where it needs to be despite the tight coverage. This is a tough throw to make and fits Hooker’s profile of having excellent accuracy.

This clip proves that Hooker has solid velocity on his passes as he gets the ball in between three South Carolina defenders. Hooker does a nice job stepping up in the pocket and delivering a strike in a small window.

While Hooker typically has a strong pocket presence, he becomes lazy with his feet and stands in the same place when deciding between stepping up in the pocket and scrambling. This allows him to get strip-sacked on this play, and his footwork becomes lazy as he gets off his spot.

On this play, Hooker rolls out to his right instead of going out to his opposite side, which has a much cleaner pocket. Hooker missed two opportunities to step up between the right tackle and left guard and after to step up to where the center was. Two receivers are open on the right at the end of the video. Hooker could have thrown to these receivers if he had bought more time.

Hooker is a very intriguing prospect as he was phenomenal in college but is an old prospect coming off an ACL injury. I don’t expect Hooker to be a day-one starter or a superstar like some other players. With that being said, I have Hooker as a low to high-end QB2 in his range of outcomes.

Hooker is a projected third-rounder at the 67th overall pick, according to NFLmockdatabase. Some places I could see Hooker finding success in are the Saints, Colts, and Commanders. In all three, I expect Hooker to have a good chance of becoming the starter at some point during the year if he doesn’t start week one. Even though these teams have had horrible offenses, they have some talent surrounding their quarterback.

I don’t project Hooker to be a superstar in the NFL; however, he has the tools to become a solid NFL quarterback. I see Hooker being drafted in the mid-second to early third round in Superflex formats.