It is time to start looking to the 2023 rookie draft. The Dynasty Nerds team is here with Superflex Rookie Mock Draft 1.0. 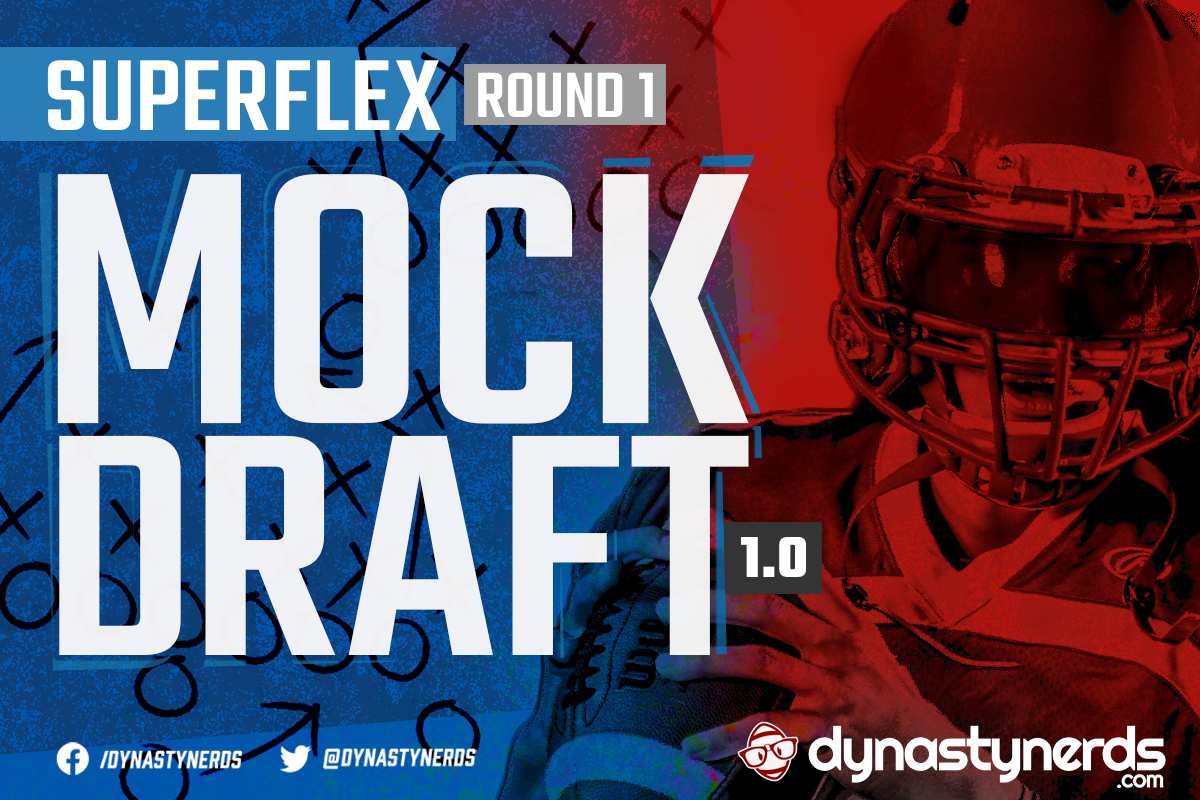 We have reached the halfway point of the fantasy football points scoring season. Dynasty managers have a clear read on their teams now. Whether you are looking at a title run or looking at next April’s NFL Draft, it is not to early to take a look at next seasons crop of rookies.

Despite this being a Superflex mock draft, Bijan Robinson is still the 1.01 and has been for quite some time. Probably the most hyped running back prospect since Saquon Barkley, yes, even more than Jonathan Taylor for those newer to dynasty. At 6’0″ and over 220 pounds, he is the perfect frame for a modern down bell-cow back. He currently ranks top ten in the nation at Yards After Contact per Attempt, a very good efficiency tool for analyzing running backs. Early NFL mocks have him as a first-rounder, and he should be a day-one starter wherever he lands. – @DanT_NFL

I’m not sure I need to introduce Bryce Young at this point: he has dominated CFB for the past two seasons and won the Heisman last year. This is a super flex draft, so it’s a no-brainer for me to grab my QB1 at 1.02. Why Young and not Stroud? Stroud is no statue, but Young offers more rushing upside, and I saw him “do more with less” last year, putting up wins despite a struggling wide receiver room after Jameson went down. – @ekballer

C.J. Stroud has the size, arm talent, and football IQ to thrive as a professional. He is decisive going through his reads and has confidence in his abilities. His elite execution from the pocket should expedite his adjustment at the next level. He should be in heavy consideration with the 1.01 pick in Superflex drafts, so I am ecstatic to get him at the 1.03 spot. Recent OSU quarterbacks have not produced at the NFL level, but Stroud boasts all of the intangibles you could desire in a prospect at the position. – @JoeBeldner

One can’t deny that Gibbs is probably the No.2 running back in this class or even the 1B to Bijan. Gibbs is a smooth rusher that can work with a variety of zone schemes. Plus, he’s a precise pass-catcher and route runner. Gibbs is going to be an elite running back in the NFL, and it’s insane to get him at No.4. – @DarthDbacks

With the top two prospects at quarterback and running back off the board, I think JSN is the perfect pick here. Despite a lack of production this season due to a lingering hamstring injury, no one has surpassed JSN to become the WR1 in this draft class. He should be the first receiver off the boards following the 2023 draft barring a crazy situation. – @FF_TJHernandez

I’m sure I’ll get flak for this pick, but if Levis is drafted in the first round of the NFL draft, this pick makes sense. The dynasty and NFL quarterback landscape is rough right now, with many reliable veterans fading into the twilight of their careers and some younger quarterbacks not developing. I don’t love Levis as a prospect, but you’ll be able to get running backs and wide receivers later in this draft. That depth will not be there with the quarterbacks. There are only 32 starting NFL quarterbacks, so it’s always worth the gamble in Superflex leagues. – @TheSmingDynasty

Tucker makes my jaw drop every time I watch him play. Tucker has good patience and vision and is a ridiculously explosive athlete. When he makes a cut and hits the hole, he’s a home run threat. He also has outstanding contact balance and has shown the ability to get it done in the passing game. I think Tucker is a complete prospect and likely will likely be an RB1 in the NFL. You can’t usually get that in the back half of the first round, but running back is the strength of this class, and I’m glad to lock one up here. – @Devy2DynastyFR

This was a tough one based on his age and limited early career success at Virginia Tech. However, Hooker has been a revelation since transferring to Tennessee despite his early struggles. He has all the tools scouts would covet at the NFL level. His age and college RPO system could give some NFL and dynasty analysts pause, but in Superflex, quarterback is king, and I’m swinging for the fences on this one. – @ReflipeWThenuz

Jordan Addison is having another great season. Addison looks the part of a complete NFL wide receiver, and it seems like he is a lock to go in the first round of the NFL draft. A big plus in my book. The only real knock on him is that he is light, but that hasn’t stopped him from being one of the more productive wide receivers in this class. At this point, Addison is one of the safest wide receiver prospects in this 2023 class, making him an easy pick for me at 1.09. – @_jasonstein

Corum was on draft radars heading into the 2022 season, and after 900 yards and 13 touchdowns in a 7-0 start for Michigan, he has pushed his way into the Heisman conversation. Short in stature, Corum has an excellent combination of power and short-area quickness, despite lacking elite long speed. The Wolverines are splitting pass work between Blake and sophomore Donovan Edwards. With only seven catches in 2022, there may be some concern about Corum’s pass-catching profile. However, 22 catches in 2021 indicate that more is possible. The fabled 2023 running back class continues to impress. – @DynastyOasis

I could not believe Zach Evans was available for me at 1.11. Evans is one of my favorite players in this class and one heck of a pro prospect. He has the size, explosiveness, agility, and speed through cuts that you love to see. One could argue that Evans is the RB2 in this class based on his elite skillset and more traditional size profile. – @FF_Hulsey

Boutte has obviously been struggling so far in 2022, but I attribute that to the overall dysfunction of the LSU offense under Chip Kelly. In terms of talent, Boutte could be WR1 in this class. Physically, Boutte fits the current mold for an alpha receiver, someone who has the burst and agility to explode in and out of breaks. – @fakefootballs

Round 1 is in the books. Who was a reach? Who was a value? Let us know what you think. Round 2 will be out later this week. We also have a 1QB Mock Draft coming.