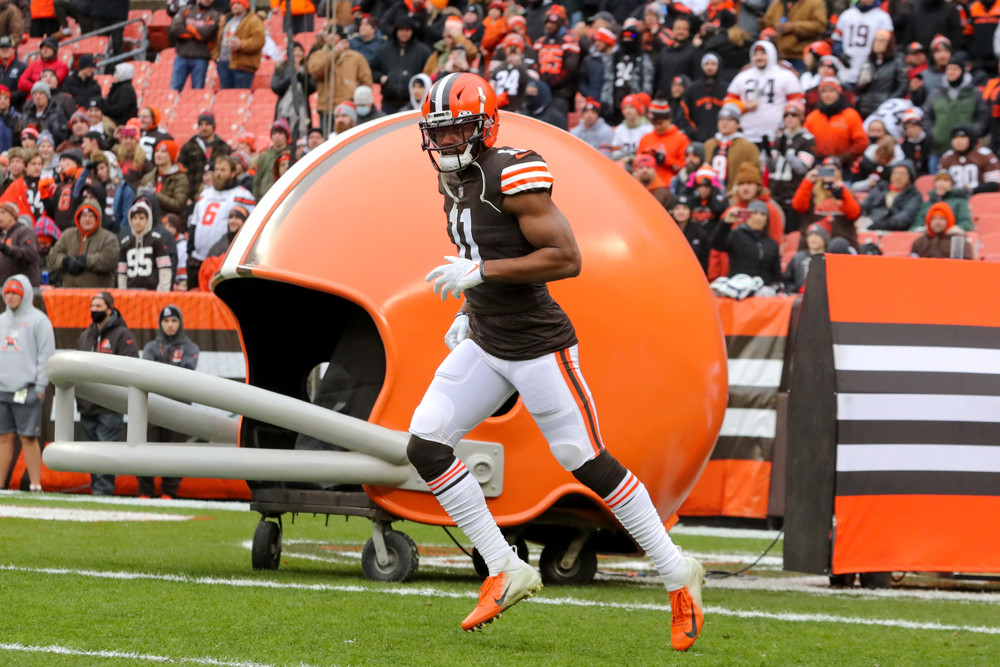 “Everybody loves a bargain,” or so the saying goes.

In dynasty, that adage holds especially true as one of the main goals in the game is to acquire assets that will appreciate in value after we have them. I’ll spare you a long, drawn-out introduction and instead just present to you several wide receivers that I think will give you a good return on your investment if you can acquire them:

Despite being a name we tend to overlook, Peoples-Jones has actually been producing somewhat consistently, topping 70 receiving yards in his last three games and topping 50 yards in six out of eight games this season. His usage is decent for how run-heavy Cleveland is with the fourth-most rush attempts in the league; Peoples-Jones is being targeted more often per game than George Pickens, Jahan Dotson, and Hunter Renfrow.

This, of course, has all transpired with Jacoby Brissett under center for the Browns. As you may have heard, Cleveland signed Deshaun Watson and intends to deploy him as soon as he is eligible to return from suspension.

Whatever your opinion on Watson, he is expected to provide a big boost to the Browns’ passing attack, and Peoples-Jones could be a beneficiary, both for the rest of this season and beyond. At just 23 years old and signed for cheap through 2023, Peoples-Jones has a chance to be a dynasty factor. Cleveland is bottom third in the league in projected 2023 cap space. The free agent crop of receivers is not expected to be very deep. That decreases the chance that the Browns will make a splash at the position, which would unseat Peoples-Jones in 2023.

For what it would cost I’d try to acquire Peoples-Jones and hope that the upgrade at quarterback helps his stock. But I would hurry. We only have a few more weeks before Watson’s return.

Burks is not a traditional “buy low” candidate since the Burks manager in your league likely just drafted him and is probably not ready to sell yet. After all, Burks has shown flashes already, it’s just that he’s been hurt.

I do think, though, that Burks presents a great “tier-down” opportunity for rebuilders. Moving off Devante Adams or Cooper Kupp due to their age in your rebuild could make sense. Trading a veteran player like that for the youth and upside of Burks, plus some significant draft capital, makes sense. If the Burks manager in your league is concerned with the negative buzz surrounding him and his work ethic early in the preseason, I would not be afraid to part with early 2023 draft capital to try to acquire Burks.

The Titans are in dire straits at receiver, and Burks was drafted in the first round to fill that void. The Titans have just one touchdown pass to a receiver all season. As soon as he is fit, Burks will be given an opportunity to produce for a team that failed to complete a single pass to a receiver in Week 9.

Is Lazard lowkey the best free agent receiver due to be on the market this off-season?

Here. Look for yourself and come back. (Link: https://www.spotrac.com/nfl/free-agents/all/wide-receiver/?ref=trending-pages)

The free agent and rookie classes in 2023 look relatively thin at wideout. Lazard might come away with a starting job somewhere this off-season. That makes him attractive in dynasty even past this season. Still just 26 years old, Lazard is in his prime years, and it might be prudent to offer a third-round pick to the Lazard manager in your league to see if they view him as a long-term asset.

I’m trying to buy Marshall wherever I can across my dynasty leagues. He showed signs of life the past few games, including scoring his first career touchdown last week. I doubt his stock has risen too steeply given how little he has done since being drafted in 2021. Robbie Anderson’s departure has certainly opened the door for Marshall to see a massive uptick in snaps over that span.

Who knows what will happen with fellow wideout D.J. Moore? Trade deadline rumors had Moore available for the right price. That remains a possibility this off-season, which would further push Marshall into a more prominent role. We’ve already discussed how thin the 2023 free agent wide receiver group is expected to be. The Panthers will have higher priorities early in the 2023 NFL Draft (namely quarterback). All signs point to Marshall being given an opportunity at a starting role in 2023 unless he plays poorly down the stretch this season.

Marshall has second-round draft capital attached to his name. Even though a previous regime drafted Marshall, Carolina would love to see him take ownership of a starting role and blossom into a productive player.

Austin is on IR and will not return this season, but the 23-year-old is somewhat intriguing as a dynasty asset. He’s essentially free to acquire if he’s rostered at all (depending on how deep your league’s rosters are).

Chase Claypool is now in Chicago. The third spot in Pittsburgh’s familiar receiving trio is wide open after Diontae Johnson and George Pickens. It remains to be seen whether Kenny Pickett and the Steelers passing game can eventually support multiple fantasy receivers. Still, even if Austin has to bide his time, the Steelers are typically a franchise that likes to give its young players a chance to ascend the depth chart after a veteran player leaves.

Austin has game-breaking speed (4.32 in the 40 at the NFL Combine) and brings a dimension that Johnson and Pickens do not.