Antonio Gibson Should Be Drafted as a Top 10 RB!

Antonio Gibson is being drafted as an RB2, and could he be an easy RB1? Cody Martineau breaks down why he is undervalued and underdrafted! 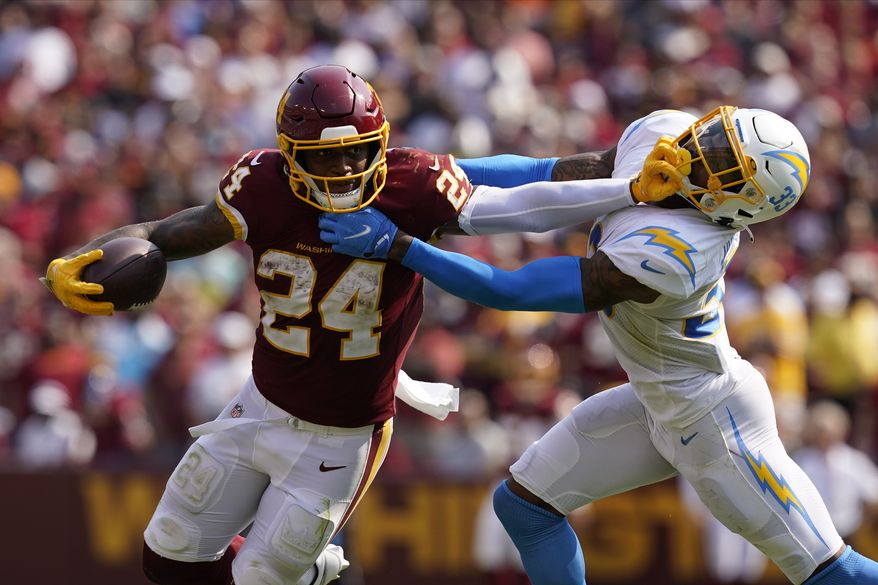 Entering the 2022 season, Antonio Gibson looks like a consensus drafted RB2 in Dynasty. I’m here to tell you why you need to draft him higher.

He Can Handle a Full Workload

In the last eight games Gibson played at the end of the year, he had five top-ten finishes. His strong finish to the year is a good sign that they are going to trust him with a bulk of the work going into the future. Yes, J.D. McKissic is back with the Commanders, but that shouldn’t scare us off.


Gibson proved that he could handle a full workload. He had eleven games with fifteen touches or more and eight of those games with twenty touches or more. One good thing is that there will be no drop-off in the receiving work either. Wentz and Heinicke are very close on targets to the backs, so there is no drop-off there. Wentz doesn’t have the rushing upside that Heinicke has either, so maybe fewer scrambles in the long run. He also turns the ball over less. So longer drives and scoring opportunities are the major upside to having the QB switch.

Gibson saw a 56% snap share per Playerprofile.com. I see that making a jump into the 65% to 70% range moving forward. Let’s not forget that Gibson will only be 24 years old going into next year. So he still has tons of room to grow and become a true workhorse.

Comparing Gibson to Other RBs

Let’s take a look at the players going around the eight to twelve range and break down why Gibson should be drafted near or ahead of them. In that range on DynastyNerds, FantasyPros, and Establish the Run, we have Derrick Henry, Saquon Barkley, Nick Chubb, Ezekiel Elliott, Joe Mixon, and Antonio Gibson (average names in those spots).

Gibson is the youngest out of the group, and the closest one to him is Barkley. They’re about a year and a half difference in age. Gibson hasn’t had the injury concern that comes with Barkley either. Yes, Barkley can bust off a seventy-yard run at any moment, but so can Gibson. Gibson’s longest run of his career might only be forty yards, but he has a 73-yard reception TD on his résumé, too, per Pro Football Reference.

With his 4.39 speed and having the eighth-most breakaway runs last year, don’t be surprised if he starts making bigger plays on the regular. Barkley also hasn’t seen a true workload since coming back from injury. So can we expect the twenty-five touches a game he was getting before? Barkley only had two games last year with twenty touches or more. We need to see more from him before taking him in the top ten again.

Chubb and Elliott are both in time shares now and have been seeing there’s role decrease every year. Chubb has lost the receiving role completely, and Zeke lost 169 touches to Tony Pollard last year. I only see Pollard’s role increasing with them losing Amari Cooper too. With Deshaun Watson coming to the Browns, I think more passing plays will happen. You don’t make a move like that to still only throw the ball twenty to twenty-five times a game. I could see thirty to thirty-five passes a game as a real possibility, which means less work for Chubb.

Elliott lost two starting linemen in La’el Collins and Connor Williams, and the Cowboys have not replaced them yet. I wouldn’t be surprised if they spend a high draft pick on an O-lineman. Most of the time, it takes some time to gel when you’re replacing multiple guys up front.

Now, on to why we need to be drafting Gibson over Henry. Yes, I think Henry will have a better overall finish than Gibson this year. The big hit on Henry is that he will be 29 at the end of this year. We just haven’t seen any RBs keep up the workload he has been getting over the last couple of years at that age. I see 2023 as the significant decline season for Henry. He’s most likely going to have a goal-line back role with around ten to fifth-teen touches in the open field. That’s not enough touches to have good fantasy production for him.

Now the hardest one to decide on, and honestly, you could sway me either way with Mixon or Gibson. Mixon will be 26 entering the season this year, so three years older than Gibson. Mixon has also only played in sixteen games twice in his five years in the league. What propelled Mixon last year was TDs. He ended the year with sixteen and hadn’t eclipsed eight scores any year before.

It is a whole new offense with much more firepower, but it’s only a one-year sample. Going into the future with such a small sample size can be hard to trust. Like I said earlier, I could go either way with them, but I’d personally be taking Gibson just because of the age factor. Everything else is close, in my opinion, for the two.

With all that being said, I’m putting Gibson in the eighth or ninth spots entering the season for start-up dynasty drafts. He has youth and a defined workhorse workload on his side.