Battle for QB1: Devy Team Weighs in on Bryce Young vs. C.J. Stroud

The battle for QB1 in the 2023 rookie class has already started and will only intensify over the next year. @FF_Hulsey and our Devy Team weigh in on Bryce Young vs C.J. Stroud. 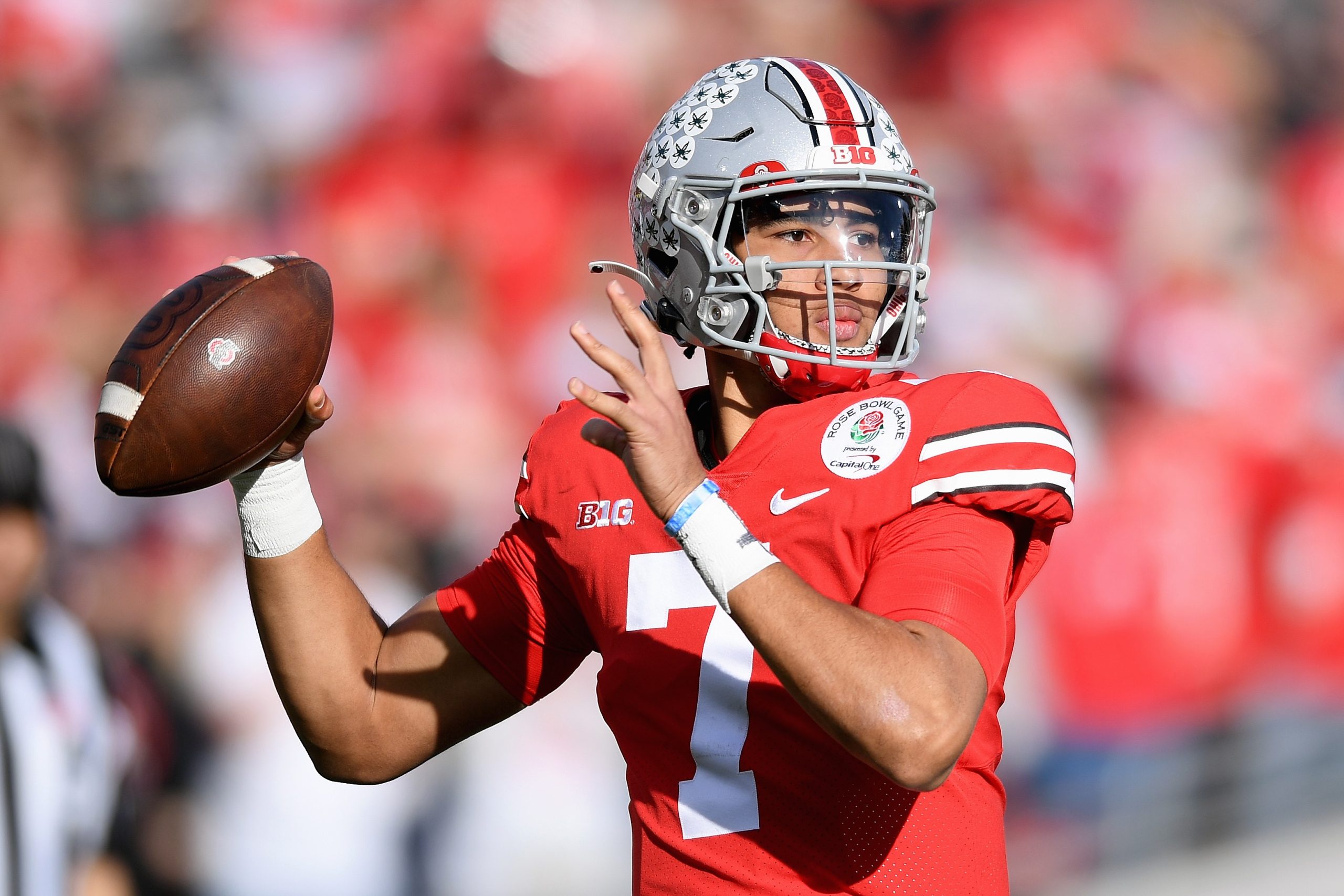 As we collectively shift our focus to the 2023 NFL draft class, one debate will take center stage over the next several months. The battle for QB1 in the 2023 rookie class has already started and will only intensify over the next year. Barring something catastrophic, Bryce Young and C.J. Stroud have cemented themselves as top draft picks next April. Who should you take with a top-five Devy startup pick, though? The fantasy and draft communities are at a 50/50 split on who the top prospect is. Our Devy Team weighs in to settle the debate.

My pick between the two is Bryce Young, the #1 dual-threat QB in his recruiting class. He proved this past year that he has the tools to be the next QB coming out of Alabama to make an impact in the NFL. Though Stroud falls behind Young as more of a 1B right now, I think Young’s experience in a pro-style offense under Saban will help him make the transition to the pros easier. Either option is great, but if given a choice, Young is a no-brainer.

After what was a disappointing 2022 QB class, we are sure in for a treat in 2023. Many go back and forth between Ohio State’s C.J. Stroud, and Bryce Young, as to who is the top QB for this year. While Young offers incredible upside and an explosive profile, C.J. Stroud is my QB1 of the class. With his ability to squeeze the ball into tight windows while maintaining great pocket maneuverability when under pressure, Stroud has continued to improve and show the discipline it takes to succeed at the next level. His overall game is one of the more polished in recent history and has to have many NFL teams already setting their sights on the 2023 draft. We could see the next “Tank for insert QB name here” situation that we have seen in years past.

At this point in the calendar, I’ll take the former Heisman Trophy winner. Make no mistake, this is a tight race that reminds me of the Trevor Lawrence v. Justin Fields duo from 2021.

Much is made of Stroud’s rapport with superstar WR Jaxon Smith-Njigba, and that duo will dominate college football this season, but Alabama isn’t going to let Young go out there without help. Alabama signed three of the top six wide receivers from the Class of 2021, so talent won’t be an issue for the Crimson Tide.

In terms of his physical profile, Young is on the smaller side at 6’0″ and 194 lbs. However, he has good velocity for his size and can make all the NFL throws.

I just love how mature of a quarterback Young appears to be. He’s got the accuracy, he doesn’t force the ball often, and he’s already played in his share of big moments. Unlike Tua Tagovailoa and Mac Jones, who seemed to just play game manager on loaded offenses, Young took over games and carried Alabama’s offense himself at times this year. I like his chances to succeed in the NFL with another year of seasoning.

In comparing these two quarterbacks, Young and Stroud are eerily similar. Both grew up in Southern California. In addition, both were highly coveted high school prospects. Young was the nation’s number two overall recruit (dual-threat QB1), while Stroud was number 42 nationally (pro-style QB2). Their success in high school has carried over to very similar results in college. In 2021, Young completed 366-of-547 pass attempts (66.9 percent) for 4872 yards and 47 TDs, while winning the Heisman Trophy. Meanwhile, Stroud completed 317-of-441 passes (71.9 percent) for 4435 yards and 44 touchdowns.

To this point in time, Young has been slightly ahead of Stroud by most measures. That being said, I have a slight lean to Team Stroud. One advantage for Stroud is his prototypical NFL size. He is 6’3″ and 218 lbs, compared to Young’s 6’0″ and 194 lbs. As previously mentioned, Stroud was also slightly more efficient in passing than Young. With both having to replace a predominant share of their receiving targets, this will be a debate that rages on throughout the season.

Both C.J. Stroud and Bryce Young are immensely talented as passers and decision-makers. When something like that happens, we have to go to the physical traits for a tiebreaker, and that nod goes to Stroud. Listed on the Ohio State website at 6’3″ and 218 lbs means he can handle the beating of a 17-game season while also not losing who he is as a player. I’m not saying Young can’t. But on paper, I’m leaning Stroud in this department.

These are awesome prospects with great arm talent and very good mobility. I have to give the slight edge to Stroud to break the tie. And there’s really only one reason… size. At 6’3″ and 218 lbs, Stroud has very good size for the position. Young, on the other hand, is only listed at 6’0″ and 194 lbs. That is both shorter and lighter than NFL teams are looking for. For context, the smallest starting QB in the NFL is Kyler Murray at 5’10” and 207 lbs. So while Young is a hair taller, he would immediately be the lightest starting QB in the league.

I think this will affect his draft stock more than most want to admit and also adds concerns about his longevity in the league if he can’t stand up to the beating. In fact, Kyler is already facing similar concerns just a few years in. So, in this case, the tie goes to the bigger player, and that’s Stroud.

My pick is Bryce Young because of his effortless ability to make plays happen at all times. Alabama’s Offensive Coordinator, Bill O’Brien, has already put Young up there with some of the best quarterbacks he has ever coached. Bryce Young can not only extend plays with his feet but has the IQ and arm talent to dagger the defensive secondary’s weaknesses. Bryce Young is the quarterback of the future!

I’m going to go Stroud here. Throughout 2021 Stroud demonstrated incredible poise in the pocket, delivering an impressive 44:6 TD to INT ratio. While he did throw fewer touchdowns than Young, I still have a sour taste in my mouth from Young’s performance in the title game. I believe Stroud’s accuracy and arm strength will carry him to the next level as a more complete prospect.

From a numbers perspective (size & production), 2023 QB1 is an easy call; CJ Stroud, Ohio State. And there is not much debate here. From a size perspective, Stroud is 6’3″ and 218 lbs. This is the type of size successful QBs in the NFL exhibit. Bryce Young is smaller at 6’0″ and 194 lbs, right on the fringe of being too small for the NFL.

Metrics wise, I like to look at QBR, Adjusted Expected Points Added per Play (EPA/play), Adjusted Yards Per Pass Attempt (AYA), & Adjusted Rush yards Market Share. The first three metrics (QBR, EPA/Play, AYA) favor Stroud over Young. However, both QBs are above the NFL success line (avg. of QBs with a Top 12 NFL Season). And neither QB is performing very well against the Rush Yards Market Share metric, so I’m not sure either of these guys will be a Konami code QB, but they both seem to be able to move in the pocket and scramble adequately. Although both QBs have produced at levels commensurate with NFL success, Stroud produced better than Young with most metrics. Add to that, Stroud has the size that NFL teams look for, and Young is on the fringe, which makes this an easy call for Stroud to be QB1 of the 2023 class.

I appreciate the Stroud love, but I want the poised signal-caller down in Tuscaloosa. Assuming even marginal improvement from his sophomore to junior season, Young will enter the NFL Draft as one of my highest-graded QB prospects of the last decade. The kid oozes arm talent, pedigree, and athleticism. More importantly, he is in control of the field at all times and is an excellent decision-maker.

Nick Saban raves about his young QB being a mature, coachable leader of the Alabama program. He is remarkably polished and looks like a point guard commanding the field in a way that reminds me of Russell Wilson. Don’t let his lack of rushing production fool you. Young has wheels and can improvise when needed. He needs to clean up his footwork a bit but let’s not overthink this. Young was the top dual-threat QB in the 2020 recruiting class, then proceeded to win the Heisman in his first season as a starter at Alabama. He is my devy QB1.

Become a member of the #NerdHerd today! Gain access to the Prospect Film Room, members-only Discord, podcasts, Nerd Scores, full rankings, and more for just $4.99 a month. Check out my complete Devy rankings immediately after signing up. Be sure to use promo code FF_Hulsey to take 15% off your membership cost.