@DynastyPlumb writes part one of a series on different and unique league settings to enhance your dynasty and/or contract league experience. 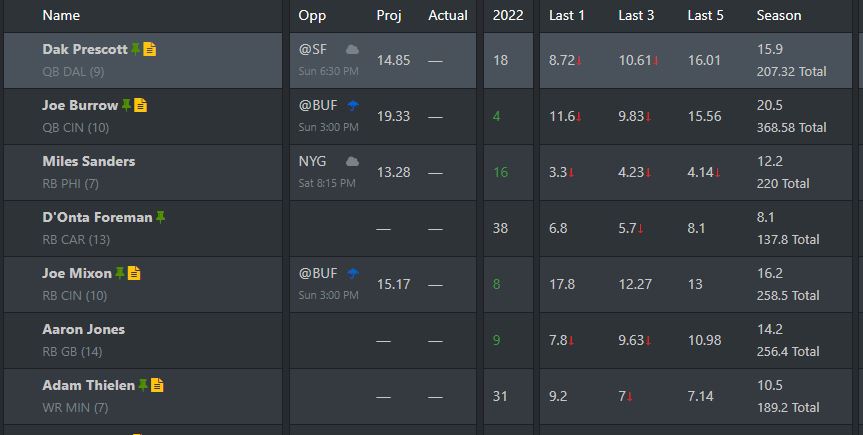 This is part one of a multi-part series on different rules you can add to your leagues. These articles are broken out into subsets ranging from rosters to contracts and trades.

Most leagues have a certain number of roster spots for starters, bench, and in some cases, injured reserve (IR) and taxi squad. However, there are some other unique and exciting roster additions and adjustments to add to your leagues:

Almost all leagues have a section of the roster for injured players. IR buckets are a fun way to revitalize the IR spot. Like in the NFL, a league can add multiple IR buckets:

The first bucket is for short-term IR. This bucket can be used for low to medium-severity injuries. This allows an manager to place a player on IR for a specific and finite number of weeks (usually three to six weeks). In contract leagues, in most cases, this allows the owner a 50% cap relief and the ability to sign a free agent or call up a player from the taxi squad to replace the injured player. Additionally, a league can allow a player only to be put in this IR bucket once per season. If a player needs to return to the short-term IR for a second time, the player must be placed on IR for the remainder of the season.

The second bucket is season-ending IR. When severe injuries like ligament tears occur, a player is usually out for the remainder of the season. When using this bucket, managers know they get with the 50% cap relief for the rest of the season. The only caveat is if the player miraculously recovers and plays during the final regular season games, the owner still cannot remove them from season-ending IR.

A third bucket is any IR designation or cap relief a league wants to implement. It could be 100% cap relief for players placed on IR. This is an area where leagues can be creative!

The NFL has three different preseason cutdown days. Each NFL team must cut down to 85, 80, and 53 roster spots on three different dates. Contract leagues, and really any dynasty league, would benefit from having preseason cuts. Preseason cutdowns force owners to make difficult decisions on building their roster and depth. This would cause the waiver wire to be extremely active at the beginning of the season. This is also a way to help bring parity to a league by allowing the worst teams to acquire talent that rich teams cannot keep.

An expansion draft is a very exciting option for dynasty and contract leagues. I was just part of an expansion draft in a @CoachStevenP sleeper league. Adding teams to an already existing league can be a daunting task. Many owners may not want to part with players they drafted and acquired. However, adding teams to existing leagues will only increase competitiveness. The best way to perform an expansion draft is to either (a) have each existing team protect x number of players on their team or (b) allow each team to protect x number of players per position. For example, in @CoachStevenP‘s league, each existing team protected 15 players from any position. The two expansion teams selected two players from each existing team to begin developing their roster.

Another aspect of an expansion draft is future draft picks. Since the new teams are just starting, it is best to give them the first picks in the draft. The expansion draft usually protects the best players, so these rookie picks would help the new owners build their teams early. BUT, for contract leagues, an expansion draft could be extremely interesting. The new teams may be able to select elite talent from existing teams due to untenable contracts (current or future) for that player. Some teams may be in salary cap hell and need to create some space. Teams shed salaries; in this case, new teams are rewarded with premium talent. Side deals can also happen where an existing team may send a draft pick so that a better, more experienced player isn’t selected in the expansion draft.

Taxi squad waivers are another way to force owners to make more difficult decisions regarding their rosters. For example, let’s say that the Joe Mixon owner also has Samaje Perine on their roster for 2022. Handcuff running backs hold minimal value until the starter gets injured. Perine uses a valuable bench spot, and during the season, the owner needs to pick up a player to fill a flex position due to injuries and byes. The owner would like to place Perine on the taxi squad to free up a bench spot. The waiver system for veterans would force the owner to make the difficult decision to subject Perine to waivers and risk losing him or to play a lesser, already rostered player in the flex position.

These are a few unique ideas I have come up with for roster manipulations that can be added to your leagues. I hope some of these ideas enhance or reignite the competitiveness in your league. Also, #NerdHerd, reach out to me on Discord if you have any questions or have other roster manipulation rules that you think are interesting to share.

Stay tuned for the next installment of this series!