Can Christian McCaffrey Regain the Title of RB1 and Stay Healthy in 2022?

Christian McCaffrey is the best running back when he’s healthy, but he’s not been healthy much the last two years so what can you expect? 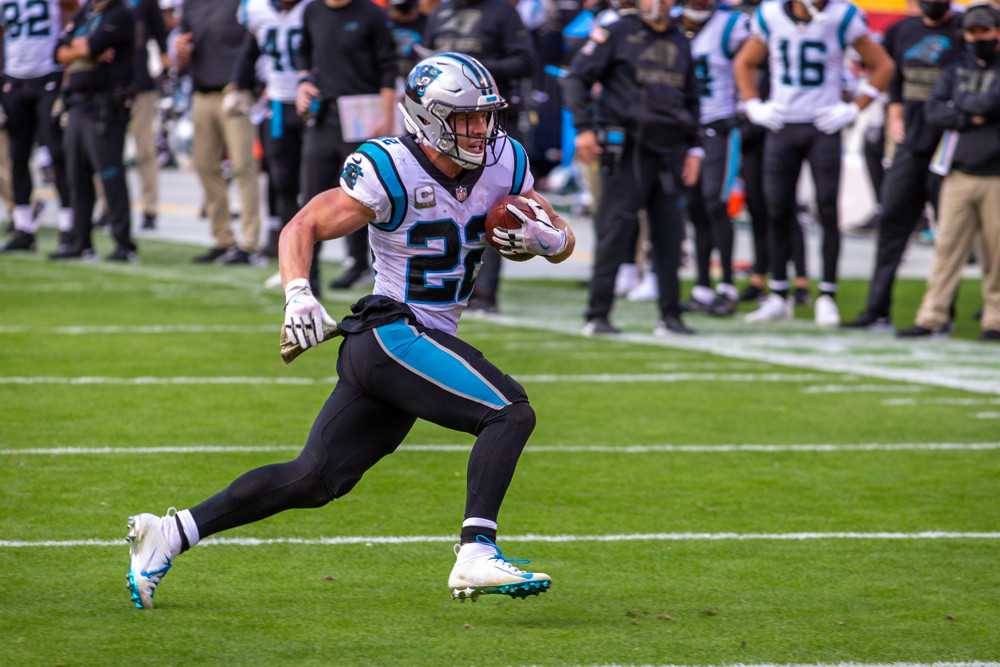 There’s no denying that Christian McCaffrey is a dynamic cheat code in fantasy football and the NFL. He is a wide receiver in a running backs body. He can do any route, rush, or anything you want on the field. That’s why he’s so crucial to the Carolina Panthers’ success and for many dynasty teams. However, he’s been dealt a rough hand the past couple of seasons. McCaffrey can’t seem to stay healthy. Over the last two seasons, he has played in ten of the 32 potential games. If he can stay healthy this year, he may return to being the RB1 overall.

McCaffrey dominated the first two and a half games he played in. Then, he hurt his hamstring, and that caused him to miss every game until Week 9. From Week 9 to Week 12, he was back to destroying defenses until he got injured again. From that point on, his season was over. We got to see five full games of excellence from McCaffrey. It’s just maddening we couldn’t see more. Over those seven games he appeared in, McCaffrey had 99 rushes for 442 yards, a 4.46 yard per carry average, and a rushing touchdown. He added on 37 receptions on 41 targets for 343 yards and a touchdown. He averaged an elite 18.2 ppg which shows he’s still an elite fantasy running back. It just comes down to his health.

I project McCaffrey to miss some time since it’s hard to believe he will last an entire season. With the way the Panthers use him non-stop, it’s hard not to see him get banged up at some point. However, with the addition of Baker Mayfield, it won’t be all on McCaffrey’s shoulders. I’d expect more rushing lanes to be open since Baker Mayfield has an arm. Defenses will respect Mayfield more than Darnold or Cam Newton. McCaffrey will get his targets in space and various routes that Mayfield can throw to. Again, unlike that Darnold. The Mayfield addition will help McCaffrey in many ways, which should excite fantasy owners.

I have McCaffrey down for 15 games. I could see it ending up being 13-14 but felt like 15 was the best choice. He will be an elite fantasy running back when he plays. McCaffrey is a cheat code and a league winner. I have him averaging 22.6 PPR points which is just insane. This is his age-26 season, so there’s plenty of tread left with how little he’s been used the last two years. I would want McCaffrey on my team in 2022 but would make sure I have plenty of depth. He can win you a league but can lose you it too without proper planning.

If you need an elite running back, but have depth and are a contender, then buy McCaffrey. He will cost you at least a first, maybe more. It depends on the owner. He’s varied value in dynasty. Some people don’t want to sell at a deflated value. Others do because of the fear it drops even more. McCaffrey is a tremendous talent so having him on your team is always a bonus. For rebuilders, just sell him. Don’t hold onto him at all. He will win you weeks that you don’t want to win. Sell now, don’t wait for a potential injury or explosion.

McCaffrey is an elite running back that has been bit by injuries the last two years. Playing in only ten games has hurt his value. Yet, the talent is still there. He’s an explosive playmaking back with league-winning potential. In a dynasty, you can’t replace him or trade for another guy like him. He’s a must-have for contenders but be sure to stock your bench with running backs and handcuffs. Better to be safe than sorry. This year, CMC will destroy defenses once again. All that matters is his health.

Do you want to become the best dynasty player you can be? Be sure to use my promo code “Dart” for 15% OFF your subscription to Dynasty Nerds! It makes it only three dollars or so! Connect with me on Twitter @DarthDbacks. I love to talk football, baseball, movies, shows, Star Wars, Marvel, and interact with the fantasy football community. For more articles of mine, click here.