Will Patrick Mahomes continue to enjoy success without Tyreek Hill? Can Matthew Stafford be trusted in your lineup? @Spydes78 answers these questions and more in the Week 5 installment of Changing the Call, a weekly guide to QB start/sits. Check it out! ⬇️ 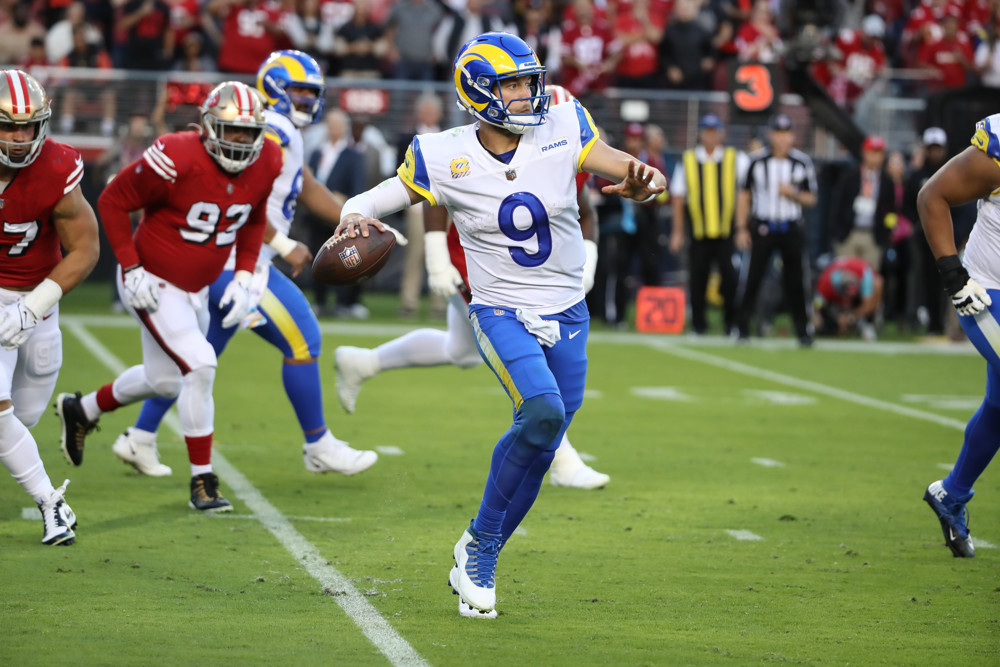 Huddle up, Nerds! You’ve looked to your favorite dynasty site to guide you through the spring and summer months, but a strong offseason alone will not win you a championship. No matter how talented your roster is, you’ll need to make the right lineup decisions to wrestle glory from your league mates.

But have no fear! Your Dynasty Nerds writers are here to shepherd you through the minefield of starts and sits. Our staff will make recommendations each week to aid in your lineup decision-making. Look for the position-specific columns below to guide you to dynasty grandeur.

The hot start continued for Changing the Call. Week 4 featured top-five finishes from both recommended starts. Josh Allen and the Bills were able to shake off a sluggish start to seal the deal ultimately. Despite rain-soaked conditions, the Buffalo standout still managed 24.5 fantasy points on the day. The waterlogged win was more than enough to keep fantasy owners happy.

Meanwhile, Tom Brady played catchup to the Chiefs from the jump on Sunday night. Thanks to a dominant performance by Patrick Mahomes, the Bucs were forced to keep the pedal down on offense. Ultimately, it didn’t matter on the scoreboard, as Tampa fell 41-31 in the primetime contest. But garbage time points count just the same for your dynasty team. Brady emerged from the defeat with a sterling stat line that included 385 yards and three touchdowns.

The ‘sit’ side of the recommended ledger was equally strong. Derek Carr finally got the Raiders in the win column for the first time in 2022. However, his performance was yet again lacking. Against a stout Broncos pass defense, Carr managed just 188 yards and no scores. His 11.5 fantasy points ranked 25th amongst Week 4 starters.

The other sit recommendation, Justin Fields, continued his fall from grace. Once a highly sought-after dynasty asset, Fields has had a disastrous start to his 2022 campaign. Posting just 174 yards, no touchdowns, and a costly fumble, he and the Bears fell to the Giants. The performance qualified as the 26th-best fantasy output of the week, raising questions about Fields’ future in Chicago.

Shaking off the rust after a late summer appendectomy limited his training camp, Burrow is starting to get white hot. Burrow is averaging 21.5 fantasy points per game over the last two weeks and is poised to lead the Bengals to success. His talented arsenal of pass catchers has Cincinnati posting an average of 257.3 passing yards per game, the eighth-best in the NFL. The Bengals will carry a two-game winning streak into their Week 5 divisional matchup versus the Ravens.

Baltimore should provide ample opportunity for Burrow to go to work. In 2021, the Ravens were 28th in the league, giving up 19.1 fantasy points per game to opposing quarterbacks. They’ve managed to regress even further in 2022. Allowing 23.2 per game thus far, Baltimore has been fertile ground for quarterbacks. They’ve allowed a top-ten fantasy finish for the quarterback in the previous three weeks.

The predictive models all seem to agree that this matchup is one to capitalize upon. Betsperts.com lists a player prop over/under of 291.5 yards passing for Burrow in this game. PFF forecasts a 20.5 fantasy point outburst, their 7th highest projection on the week. Lastly, the experts on FantasyPros have Burrow ranked as the 6th most favorable quarterback option for the week.

With weapons and a winning streak, look for Joe Shiesty to keep the party going when the Bengals visit Baltimore this weekend. He’s primed to be precisely what the dynasty doctor’s ordered for your rocky roster.

It seems that Mahomes has read the press clippings this off-season. You know, the ones that proclaimed that the loss of Tyreek Hill would render him ineffective. Even without a standout receiver, Mahomes has the Chiefs again riding high in the AFC West. Kansas City sits atop their division after four weeks, with a top 10 passing unit that’s averaged 267.8 passing yards per game. Mahomes’ early season PFF grade of 81.8 ranks third in the NFL.

When we last saw the Chiefs quarterback, he was avenging a Super Bowl LV defeat with an impressive defeat of Brady on Sunday Night Football. Despite relinquishing just 13.5 fantasy points per game to the QB in 2022, Mahomes made a statement by gouging the normally stingy Bucs for 24.4 on national television. If he can do that to a tough opponent with all eyes upon him, you should be drooling over his pending matchup.

In Week 5, the underachieving Raiders will pay a Monday night visit to Arrowhead. Despite getting off the schnide with a much-needed victory against Denver, the Raiders continue to play horrendous pass defense. Their unit ranks 30th in the league, giving up 23.6 fantasy points per game to quarterbacks. And those stats were allowed against the likes of Ryan Tannehill and a floundering Russell Wilson.

Just imagine what Mahomes can do with that kind of leeway. In eight career games against the rival Raiders, Mahomes has averaged 318.3 yards and 2.8 touchdowns with a 65% completion percentage and a quarterback rating of 112.4. He loves playing the silver and black.

Kansas City is favored by a touchdown with a 51-point over/under. The experts foresee an explosive night from the Chiefs’ offense. And, given the trends, it’s hard to argue. Lock Mahomes into your lineup and have a Monday night ace in the hole for your Week 5 fantasy matchup.

Oh, how the mighty have fallen. The plummet from world champion to sit recommendation seems to have happened quickly. And yet, with the way Matthew Stafford has underperformed thus far, it is an entirely warranted suggestion.

The once high-flying Rams offense has become stale and predictable, relying far too heavily on stud wideout Cooper Kupp. The former Super Bowl MVP has dominated the targets, with over 36% of the passes aimed in his direction. Much to the chagrin of fantasy owners, Allen Robinson has been a complete afterthought, with only 18 targets through four weeks.

Combined with an ineffective running game, this dysfunctional dynamic has conspired to sink the Rams’ passing attack. Posting just 225.5 passing yards per game, Los Angeles ranks a dismal 20th in the league. With more interceptions (six) than touchdowns (four), Stafford has earned a dubious PFF grade of 64.9, approaching the NFL quarter pole.

In Week 5, the Rams will host the vexing Cowboys. After losing starter Dak Prescott in an uninspiring opening, many prematurely dismissed ‘Dem Boys.’ However, the Cowboys, led by a tenacious defense, have been remarkably resilient. Led by standout linebacker Micah Parsons, Dallas has terrorized opposing quarterbacks, allowing just 12.0 fantasy points per game. A top-ten defense does not spell relief for a reeling Rams team.

Despite being favored, the low over/under of 43 points also portends a low-scoring day for the home Rams. Stafford is best suited on your fantasy bench until Los Angeles can show some signs of life offensively. Look elsewhere before trying to shoehorn him into your lineup this week.

In his third season at the helm, it’s safe to say that the Matt Rhule era has been a massive disappointment in Carolina. Coaching the Panthers to a lackluster 11-26 record over his tenure, it’s hard to imagine that Rhule’s seat could get any hotter. After acquiring former first-overall pick, Mayfield late in the off-season, there was some optimism for the beleaguered franchise. However, it’s been business as usual thus far in Charlotte.

Has the coaching failed the player, or has the player failed the coaching? That’s a debate for the ages. However, the results are inarguable. After four games with Mayfield leading the charge, the Panthers have amassed a pitiful 166.0 passing yards per game, 30th in the league. Baker has failed to forge a meaningful connection with star wideout D.J. Moore, connecting just 13 times for 138 yards. Mayfield himself has earned a pitiful PFF grade of 46.4 for his efforts, 33rd among eligible passers.

Any hope of turning around a calamitous start will need to come against Carolina’s Week 5 opponent, San Francisco. The Niners will invade Carolina after a sound thumping of the reigning world champs on Monday night. Their defense has spelled big trouble for quarterbacks in 2022. They have not allowed an opponent to surpass 200 yards passing in any contest this season. Offenses have scored a minuscule average of 11.5 points per game against the Niners.

San Francisco is a nasty draw for even the most potent offense. The matchup has explosive potential for the scuffling Panthers. Oddsmakers have the road Niners favored by nearly a touchdown, with an over/under below 40. According to playpicks.com, multiple sportsbooks have established an embarrassing player prop for Mayfield of 0.5 passing touchdowns in this game. You win if he throws a single touchdown, and it’s still a tough decision.

One thing is certain; the forecasted performance is not the production you want for your fantasy lineup—Bench Baker in this nightmare matchup. Better yet, trade him and redeem any remaining value before the Panthers follow suit and bench him.

I thoroughly enjoyed bringing you this piece and would love to continue the conversation on quarterback starts/sits. Please feel free to comment below or contact me @Spydes78 on Twitter. And also, stay tuned to @DynastyNerds for a steady pipeline of content from our eminently qualified staff to carry you through your season. If you like what you read, please consider becoming a subscriber to any of the elite tools that Dynasty Nerds has to offer. Make sure to use the promo code “SPYDES” to receive a 15% discount. Thanks for reading, and enjoy the grind!