College Football Week 7: Too Cold or Too Bold

Each week, fans around the country react to big games and disappointing ones alike. Each week, our writers decide which reactions are legitimate and which aren’t. 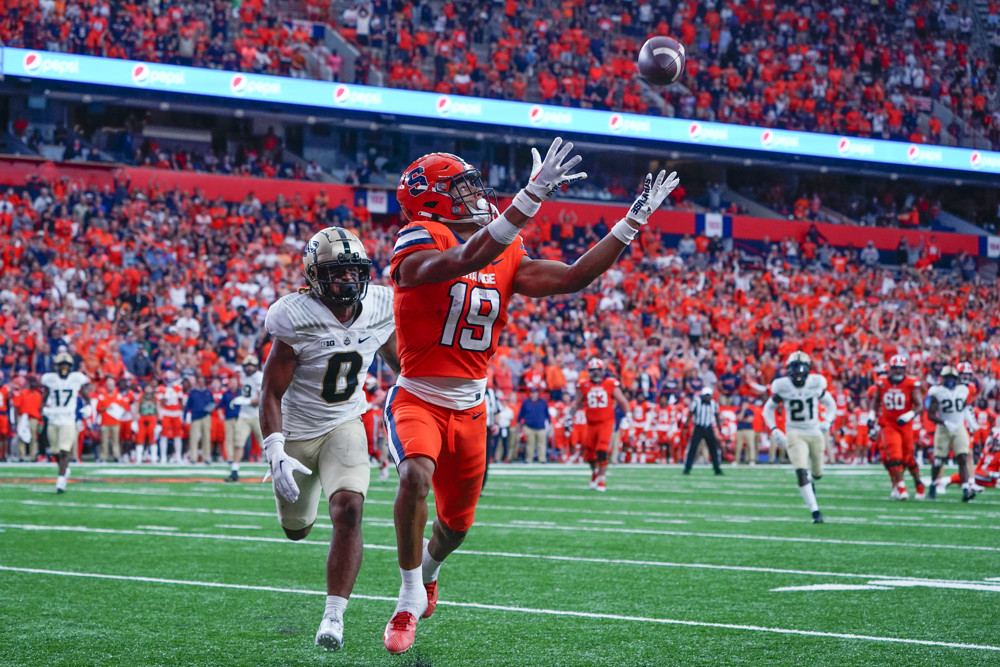 Every week of college football is filled with big performances and disappointments alike. Here, our writers react to some takes around the CFB world to help distinguish between recency bias and take lock.

1. Jalin Hyatt is a Day 2 prospect

If you didn’t get to watch the Tennessee vs Bama game this weekend you missed a hell of a good one. Assuming you heard of Tennessee WR Jalin Hyatt and his 5 TD’s and wondering how he scored? Here ya go. Enjoy. pic.twitter.com/xrV9ebOx2m

Tennessee upsetting Alabama at home was the weekend’s biggest story, and they could not have done it without Jalin Hyatt. The junior wide receiver caught an absurd five touchdowns to bring his season total to ten. He put himself on the map as a Day 2 prospect in the biggest game of his life. Too Cold or Too Bold?

Hyatt has a very small amount of production thus far and doesn’t have a skill set that will make him massively successful at the next level. Tennessee saw a weakness, and Hyatt exploited it. He’s a good receiver and can stretch the field, but I don’t see much nuance in his game overall.

Tennessee wide receivers seem to have a knack for getting over drafted in the NFL Draft. Hyatt just hasn’t done enough at this point in his career to warrant day two draft capital. This breakout game was largely a product of Cedric Tillman being injured and missing the game and Alabama’s safeties being clueless about stopping the deep threat. While I think his athletic profile has a chance to pop at the NFL Combine and move him up draft boards, at this point, I think day two capital is a bit too rich for me.

I would love to be the contrarian, but it is a clean sweep. The Tennessee wideout will never have to buy a drink in Knoxville again. Day 2 draft capital is hard to imagine, though. The physical profile isn’t quite there, the analytical profile is certainly lacking, and I don’t see teams falling in love with his technical ability. Tennessee found a weakness in the Alabama secondary; without Cedric Tillman, Hyatt was the main beneficiary. I’m afraid postgame photos with Peyton Manning are the closest he gets to making noise in the NFL.

The Michigan running back has been dominant through the first half of the season, even earning some Heisman hype. In seven games, he has had 936 yards and 13 touchdowns from scrimmage. While his size has been a concern for some, he is listed at 210 lbs this year by Michigan, and his elite production and tape are enough to slot him inside the top five in a great 2023 running back class. Too Cold or Too Bold?

But he’s right there knocking on the door. I think this 2023 class has all-time potential for running backs in particular. Bijan, Jahmyr, Evans, Tank, Tucker – I could make a legitimate case of Corum over Tank, but even sixth in this class isn’t bad. This is right on the fringe of Too Cold territory, but he’s still sixth for me at this time.

Everyone was down on Corum coming into the season because they thought he was too small for the NFL, but he’s listed as 5’8″ and 210 pounds and has shown the ability to run between the tackles this season. Behind Bijan, Gibbs, and Evans, this running back class is wide open. I can see a team falling in love with Corum as a slightly larger version of Austin Ekeler, drafting him in the third round, and utilizing him in a similar fashion.

Currently, my top 5 running backs in the 2023 class are set. We have an unprecedented group of super prospects at the top of this class. Robinson, Gibbs, Evans, Tucker, and Bigsby make up a mega-tier of top running backs. All of them are playing well, posted video game stat lines this past weekend, and are more complete backs than Corum. After this top tier, Corum has a solid case to be the next name mentioned. He clearly has a place in the league, especially with his improvement as a blocker, but I’m not convinced he has the profile of a complete NFL back.

While Darnell has not been able to produce at a high level so far, the 5-star has flashed his athletic ability through 2.5 college seasons. He’s starting to pick it up this year and recorded his highest yardage in a game on Saturday with 78. In what is a bit of a lackluster TE class after Michael Mayer, Washington’s athletic upside is enough to place him inside the top 3 despite his lack of production. Too Cold or Too Bold?

But I wouldn’t be surprised at all. Washington is an interesting one for me. TEs that size – 6’7″, 270 lbs.- don’t succeed often, and while he’s athletic, nobody is confusing him for Kyle Pitts. I don’t see much fluidity in his game, and I don’t think he will cause a lot of mismatches at the next level. Washington could still get top three because of a lack of other options, but that doesn’t mean he’s going to have a better shot of succeeding in the NFL.

Michael Mayer is the prize in this year’s tight end draft class, and then it’s wide open. Given Washington’s size, I think teams will fall in love with his blocking ability at the tight end position, and while he’s had limited production at Georgia in the passing game, he is more than capable of producing there as well. Many other top tight ends, such as Jaheim Bell, Cameron Latu, and Brant Kuithe, have fallen off this year due to poor play or injuries, so I think it’s highly likely Washington is one of the first three tight ends off the board.

Primarily due to the struggles other 2023 tight ends have encountered heading into draft season. I think NFL teams might obsess over Washington’s size, athleticism, blocking ability, and unique receiving skillset. It also helps that Washington has emerged as the top Georgia tight end in a room full of NFL prospects. I see no reason he can’t be one of the first tight ends off the board in April.

When this offense is clicking you won’t stop it! RUN WILD HOGS!!.👆🅰️🐗@raheim_sanders said ✌️
pic.twitter.com/Gmpib2m4Z2

The devy running back landscape is great, and Rocket Sanders is a part of the reason. The 2024 Arkansas prospect has been balling out this year to the tune of 1058 yards and 8 touchdowns from scrimmage in seven games. He’s coming off one of the best games of his young career, notching 175 yards and 2 touchdowns on just 15 carries in a win against BYU. He’s one of the top backs in the 2024 class and a top 10 overall devy running back. Too Cold or Too Bold?

The Rocket had landed. He was fringe top ten before the season, and he’s shown massive improvement in several phases of his game. Sanders is a true three-down back with great size, and he’s my RB3 currently. Bijan is 2023, and TreVeyon is 2024. I have Sanders a shade above Singleton only because he will be playing on Sundays a year earlier.

This take is so cold that it’s freezing. Currently, I only have Bijan Robinson, TreVeyon Henderson, Jahmyr Gibbs, Zach Evans, and Nicholas Singleton ranked ahead of Sanders. His play this season has been sensational and has vaulted him ahead of players such as Will Shipley and Braelon Allen for me in the 2024 class, and I think he could step onto an NFL field right now and be a top 12 running back in the league. He is someone that I would be willing to overpay for in Devy or Campus2Canton leagues.

Several of us on the Devy Team have been shouting this from the rooftops for months, so I love seeing the community embrace Rocket Sanders. He was one of “My Guys” for the 2022 season and has ascended to my RB2 in the 2024 class. At 6’2″ and 220 lbs, Sanders is a powerful runner with surprising versatility and athleticism. He has also shown above-average receiving ability. Sanders looks to be the total package for playing on Sundays.

The Syracuse Orange are off to a hot 6-0 start. Despite what many expected, it hasn’t just been the Sean Tucker show in the dome. Sophomore wide receiver Oronde Gadsen II is starting to turn some heads as well. He has caught 426 yards and 4 touchdowns in his last four games. He’s been a big play machine for Syracuse, and fans already think he could be an NFL prospect. Too Cold or Too Bold?

Right now, it’s trending toward Too Cold. I’ve been impressed with Gadsden thus far, but he’s got room for improvement, and I want to see more. PJ, in the following section, nailed it perfectly!

I think it’s a bit premature to say that he’s an NFL prospect, but he seems to be trending in that direction. He seems to have assumed the Dontayvion Wicks role in this Robert Anae offense at Syracuse and, as such, has been putting up big numbers in this offense. However, with Shrader possibly on his way out, it remains to be seen how this offense will look next season. Wicks seemed like a surefire day-two NFL pick last season playing in this offense. This season Wicks has looked lost this season outside of it, so I am worried Gadsden’s production might be scheme specific as well. Gadsden is someone that I am monitoring moving forward, but for now, I’d be happy with any C2C production that you can get out of him and consider it a cherry on top if he gets decent draft capital.

I am happy to talk up Gadsden as an NFL prospect. He has been on my watch list, and I was again encouraged by an 8-141-2 performance against a top defense. He is a physical force with a huge catch radius. Yes, I am concerned that he may be a product of the offense. The film doesn’t lie, though; he looks to be a legitimate pro prospect.